It has been almost two months since the Phase-1 trade deal was signed between the United States and China. The coronavirus started to spread since then, first in China and then worldwide, calling into question the ability of China to fulfill its commitments in the deal. Among all the ambiguity around the deal, one point of certainty is that the feasibility of enforcement will not be compromised by diverging translation, as the analysis presented here shows the English and Chinese versions of the U.S.-China Phase-1 trade deal are identical.

The agreement marks a ceasefire in U.S.-China tariff war, incorporating an agenda toward a more transparent and rule-based Chinese economy: regulatory improvement in China’s intellectual property protection; greater market access for U.S. companies in financial services and agriculture; a promise from China to not manipulate its currency to expand exports; and most notably, $200 billion in China’s additional purchases of U.S. goods and services by 2021. 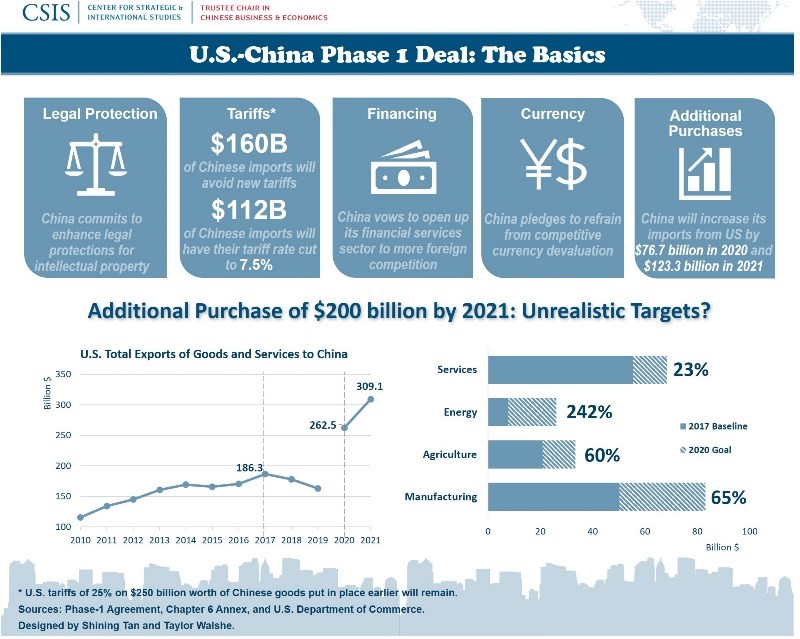 As of mid-March, there is no outward sign that the coronavirus breakout will disrupt Chinese delivery on their promises, despite the inclusion of a force majeure clause in the deal that Beijing could potentially invoke to request a delay in implementation or adjustment to their commitments: “In the event that a natural disaster or other unforeseeable event outside the control of the Parties delays a Party from timely complying with its obligations under this Agreement, the Parties shall consult with each other.” The two sides reportedly spoke recently, and the Chinese apparently made no request to reduce or delay their commitments.

Texts of the agreement

While the whole world waits to see how the deal will play out, the text of the deal itself warrants closer examination. Our exhaustive comparison of all 91 pages of the deal revealed that the English and Chinese versions were identical.

Clear and faithful translation between the official languages of signatories is the standard practice for international agreements. According to Claire Reade, senior associate with the Trustee Chair in Chinese Business and Economics at CSIS and former assistant U.S. Trade Representative for China, the fact that the Chinese and English texts are identical is not unusual, as alignment is desirable for a binding agreement.

That said, when it comes to U.S.-China bilateral agreements, identical texts cannot be taken for granted. Selective translation in diplomatic documents has been a feature of the bilateral relationship since the very beginning of diplomatic normalization. The Shanghai Communiqué, a key agreement in the establishment of diplomatic relations signed during Nixon’s visit to China in 1972, contained translation discrepancies in sections related to Taiwan. The English version of the Communiqué wrote that the United States acknowledged that “all Chinese on either side of the Taiwan Strait maintain there is but one China and that Taiwan is a part of China.” However, in the Chinese text “acknowledge” became “认识到” which literarily means “realize” or “recognize.” This single word difference reflected different interpretations of the U.S. position on the One-China Policy: the English version merely noted, in a value-neutral form, the existence of a One-China Policy, while the Chinese version implied U.S. acceptance of that policy.

This translation discrepancy marked a nuanced diplomatic position for the United States and China. Throughout the bilateral relationship, U.S. official recognition of the People’s Republic of China (PRC) as the sole legal government of China was paired with a lower-order “acknowledgement” of the Chinese claim that Taiwan is part of China. With this word play, the Nixon administration was able to kick the can down the road while paving the way for a normalized relationship with the PRC.

However, we may be running out of road – cross-Strait relations represent the biggest potential time bomb between the United States and China.

Ambiguous translation in this way can be a diplomatic tactic for both U.S. and Chinese governments. The deliberate manipulation of provisions in agreements to preserve different interpretations was regarded by Henry Kissinger as “constructive ambiguity” during the negotiation of the 6-Point Agreement in the Middle East. It allowed parties to set certain disputes aside to focus on more constructive areas for conflict resolution. This tactic has long been employed by Chinese diplomats as well. Chinese premier Zhou Enlai proposed to “seek common ground among us, while keeping our differences (求同存异)” at the Bandung Conference in 1956 to set ideological differences on communism aside. It has also been a tactic put to use in territorial disputes such as the Taiwan question (the 1992 Principle) and the South China Sea (“Set aside dispute and pursue joint development”).

The identical texts of the Phase-1 deal show that neither side is using selective translation as a tactic to introduce elements in the agreement that have not been settled in actual negotiations. While some may suspect that the agreement is dead on arrival due to political considerations or implementation problems and it is simply not worth the time to play translation games, it is equally possible that both the United States and China are treating the negotiations as a good faith effort to reach a workable end state and seek to avoid undermining the agreement through manipulative translation. Just by how much time both sides have spent on hammering out the agreement, it is unlikely that either side treat it as disposable. Any current implementation challenges from the coronavirus outbreak represent an unforeseen shock that may complicate the enforcement of the deal but should not be retroactively read into negotiations.

In addition, no translation ambiguity does not mean no ambiguity at all. Questions remain on unrealistic targets for China’s additional purchases of U.S. products (see Figure 1) and the method used to reach the final dollar value. As Scott Kennedy points out in his recent CSIS Brief, Mystery Math, the text listed 558 items but provided no explanation on the methodology for selecting items and setting targets. Without a clear scorecard, the implementation of the deal will remain foggy. So is the road ahead for bilateral trade relations.

Shining Tan is a research associate with Trustee Chair in Chinese Business and Economics at CSIS.