Fortune Favors the State-Owned: Three Years of Chinese Dominance on the Global 500 List

In 2020, China for the first time had the largest number of companies of any country represented on the Fortune Global 500 List. The Trustee Chair team analyzed the 124 Chinese companies on the list that year and compared their performance with companies from other countries. We found that although Chinese firms stood out for their gigantic size, their performance was less impressive: their average profit margin and return on assets were substantially worse than those of many other major countries’ firms on the list.

Since then, Chinese firms have continued to outnumber those from other countries. To evaluate whether Chinese firms' performance has improved since our 2020 analysis, the Trustee Chair team has analyzed the 2022 Fortune Global 500 Rankings.

1. China Has Had the Largest Number of Companies on the Global 500 List Since 2020

Chinese firms continue to outnumber those from the United States, 136 to 124, and are way ahead of Japan, which has only 47 companies on the list. China now has more firms on the list than Japan, Germany, France, and United Kingdom combined (Figure 1).

Companies from the United States and China now account for 48% of all Fortune Global 500 companies,  making the list another field for competition between the two countries. Since 2000, the percentage of Chinese firms on the Global 500 List has increased from 2% to 27%, while the percentage of American firms has dropped from 36% to 25%.

People's Daily, the Communist Party’s most important newspaper, noted the change and claimed that the Fortune Global 500 List is “the best witness of China's economic take-off.” At the same time, People’s Daily also admitted that Chinese companies’ profitability is lower than that of others on the list. 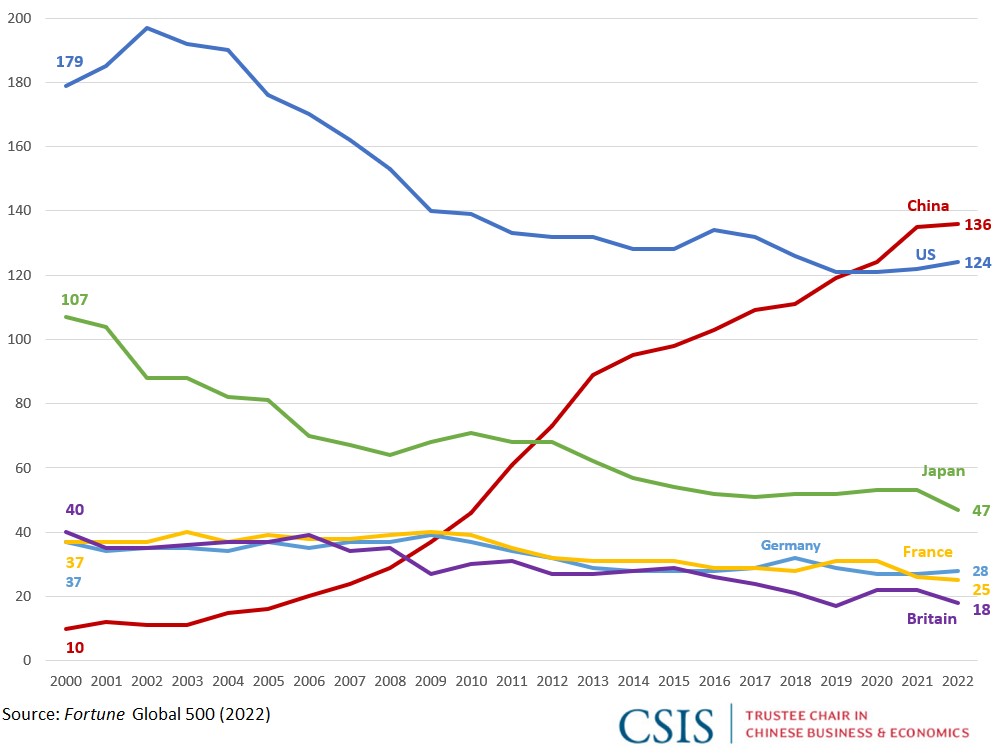 2. The United States and China Continue to Stand Out in Scale but the Gap Between Them Is Smaller

American and Chinese firms surpass companies from all other countries in terms of revenue, profits, and assets. Apart from having the highest total assets, Chinese firms are now also catching up with American firms in terms of total revenue. In 2020, the revenue gap between firms from the two countries was $1.5 trillion, whereas now the gap is only $0.2 trillion. 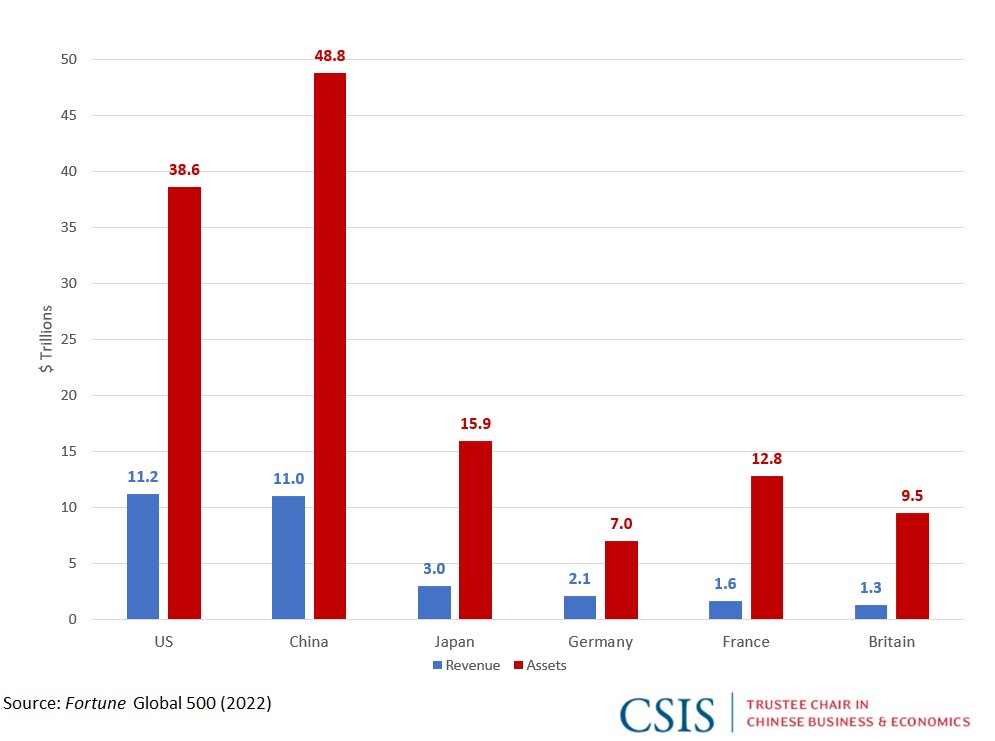 3. Chinese Companies Don’t Do Well in Terms of Profitability

Although there have been more Chinese companies on the Fortune Global 500 List than any other country for three years in a row, their profitability still lags that of U.S. and most European companies. In 2020, Chinese companies’ average profit margin and return on assets were 4.5% and 1.9% respectively. In 2022, Chinese firms performed similarly; what has changed is that most firms from other countries have improved significantly. So now China has the lowest average profit margin and return on assets among all countries that have more than 10 companies on the 2022 list (Figures 3 and 4).

4. China’s Fortune 500 Companies Performed Poorly Because They Mainly Are SOEs

Why do Chinese companies still perform so poorly relative to other Fortune 500 firms? People's Daily argued that this is because of the “industrial structure problem.” The newspaper claimed that many Chinese firms on the list belong to traditional industries such as real estate, construction materials, mining, and engineering construction. As China moves away from rapid industrialization and urbanization, the argument goes, these companies are not as profitable as they used to be and drag down the average performance of Chinese firms.

The average profit margins and return on assets show that Chinese SOEs are still extremely inefficient and not very profitable (Figure 6). Compared to 2020, the average profit margin of Chinese private firms has slightly decreased by 0.5%, possibly due to the impact of the COVID-19 pandemic, but it is still almost double that of SOEs.

Side-by-side comparisons of Chinese SOEs and private firms in the Global Fortune 500 show that out of the nine sectors that have both private firms and SOEs who made it on the list, private firms outperformed SOEs in seven of them (Figure 7).

Wholesalers is the only sector where SOEs are significantly more profitable than their private counterparts. This is probably because private companies were greatly restricted in their operations because of China’s COVID-19 control measures, whereas state-owned wholesalers were selected by the government to provide COVID-19 medical supplies and other emergency materials, allowing them to maintain high performance. For example, Xiamen ITG Holding Group, whose rank on the list increased by 178 positions since 2020, was one of the first companies in Fujian province to be able to import COVID-19 essential supplies with no tariffs and “procured millions of masks and tens of millions of RMB worth of pandemic control essential materials on behalf of the Xiamen Municipal Government.” The company even expanded into the medical business and built a testing lab in 2020 which according to Xiamen City TV was the “backbone of Xiamen’s COVID-19 PCR testing.” 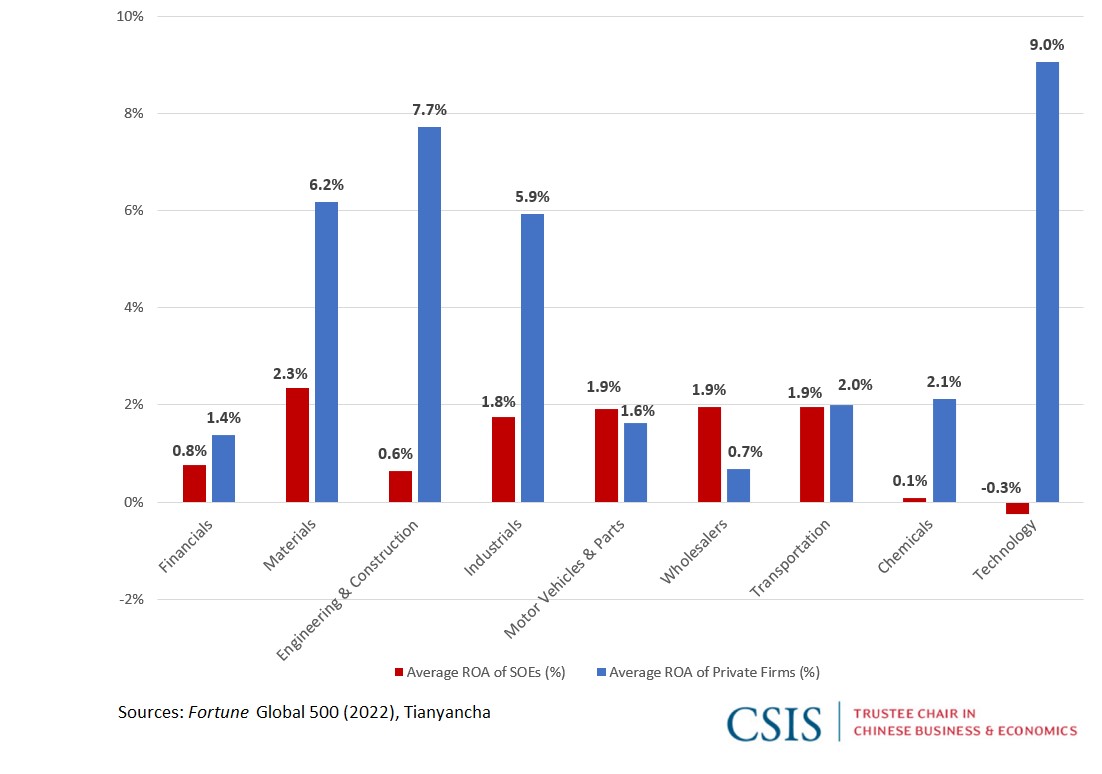 5. Almost Half of the Chinese Companies on the List Come from the Financial, Materials, and Energy Sectors

Like in 2020, companies from the financial, materials, and energy sectors made up almost half of the Chinese companies on the list (Figure 8), but the distribution of assets among them is very unequal. Companies in the financial sector account for almost 70% of all Chinese firms’ total assets (Figure 9). 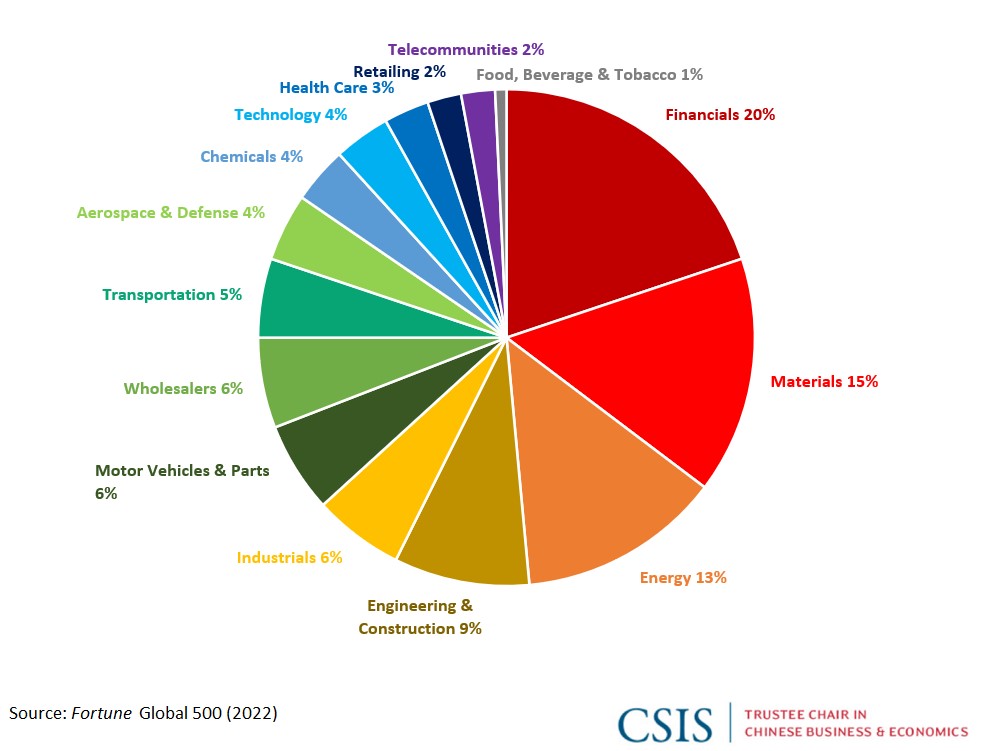 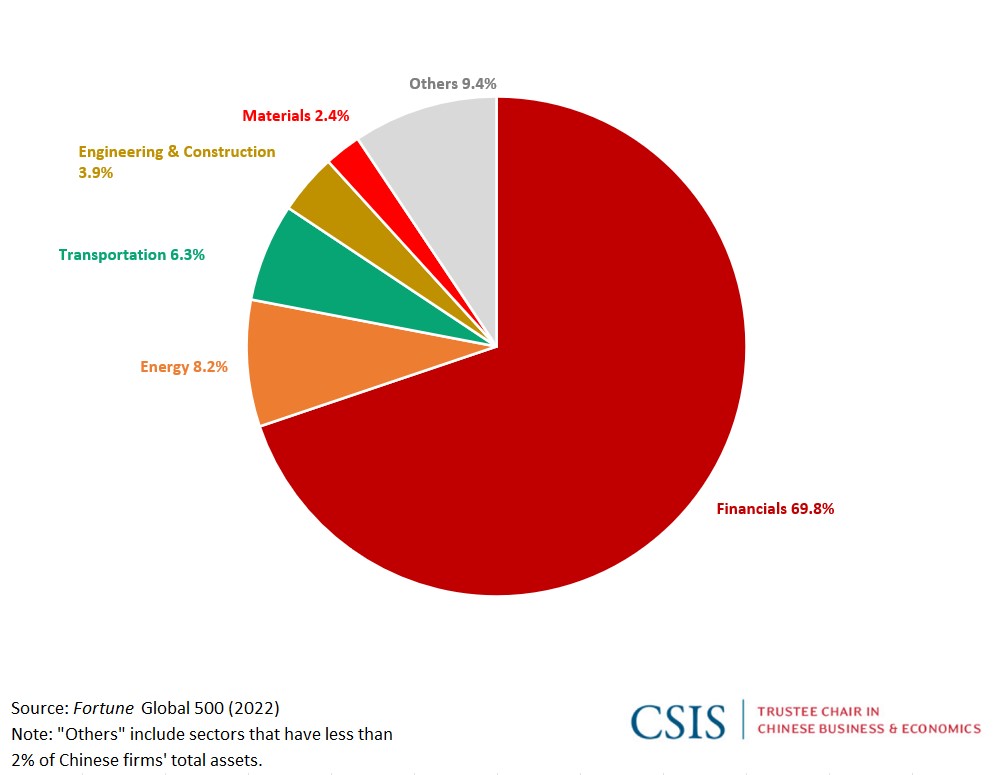 6. Beijing Still Has the Largest Number of Major Chinese Companies That Are on the Fortune Global 500 List 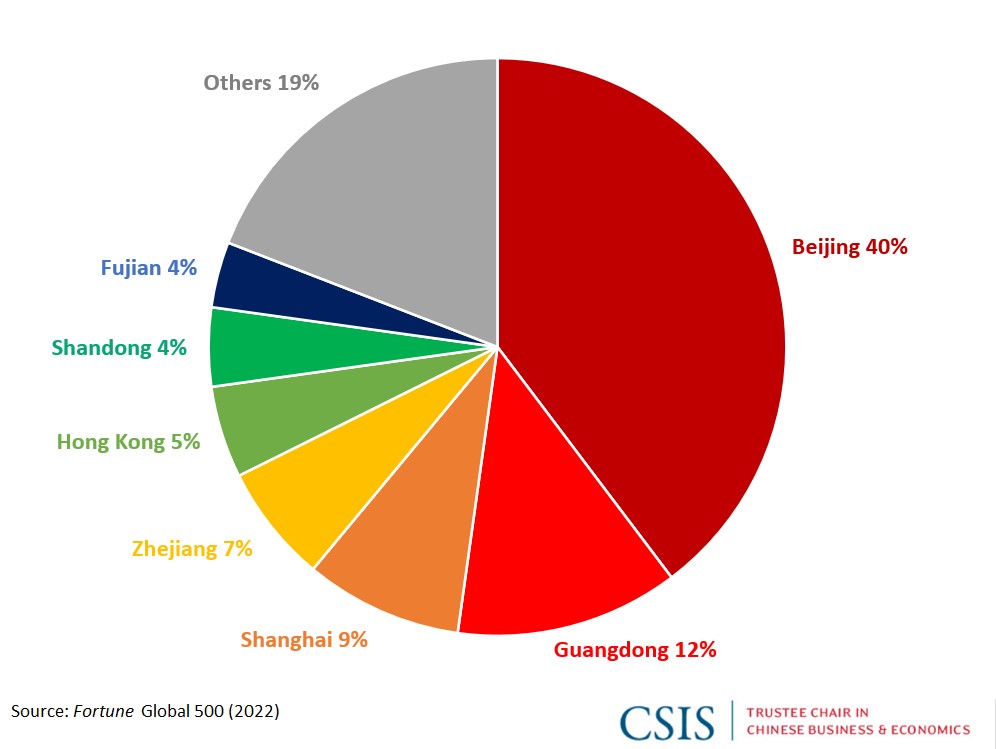 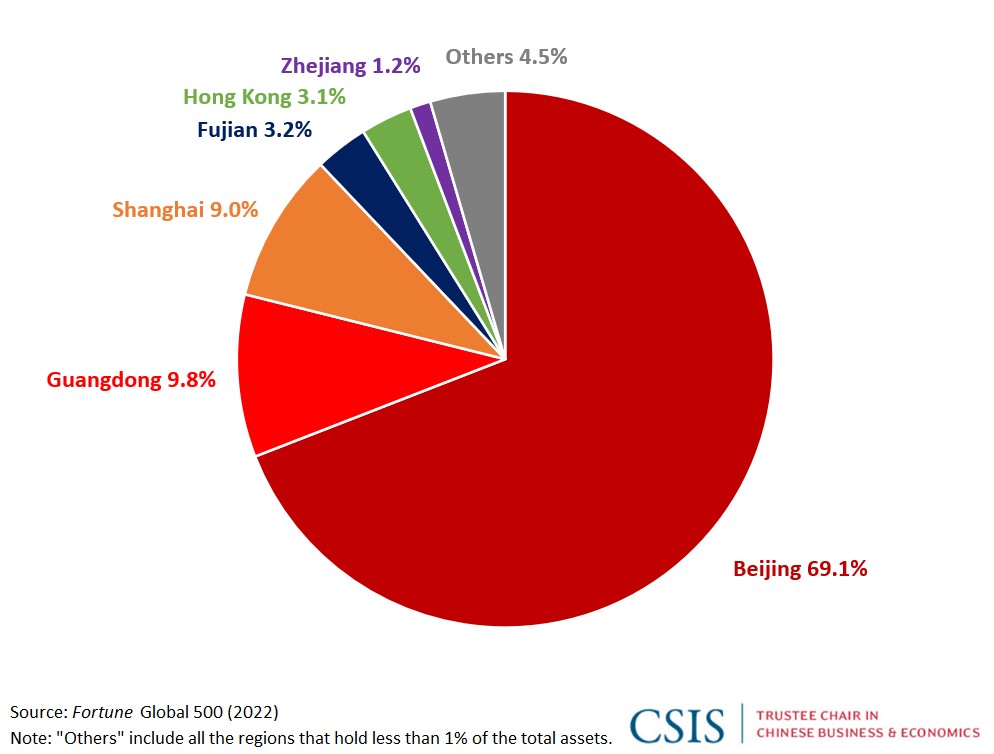 Chinese President Xi Jinping has repeatedly stressed the importance of SOEs in achieving the party’s industrial policy and geo-strategic objectives. Absolute state control over those SOEs and the massive amount of assets they hold shows that Chinese SOEs are still behaving as “asset maximizers” rather than “profit maximizers.”