Numbers or Perceptions? A Widening Gap in Evaluating China’s Innovation

By Mingda Qiu and Qiuyang Wang

Is China innovative if people don’t believe it is? There are a large number of cross-national metrics of innovation, and there is a growing difference between indices based on perceptions and those based on quantitative indicators. 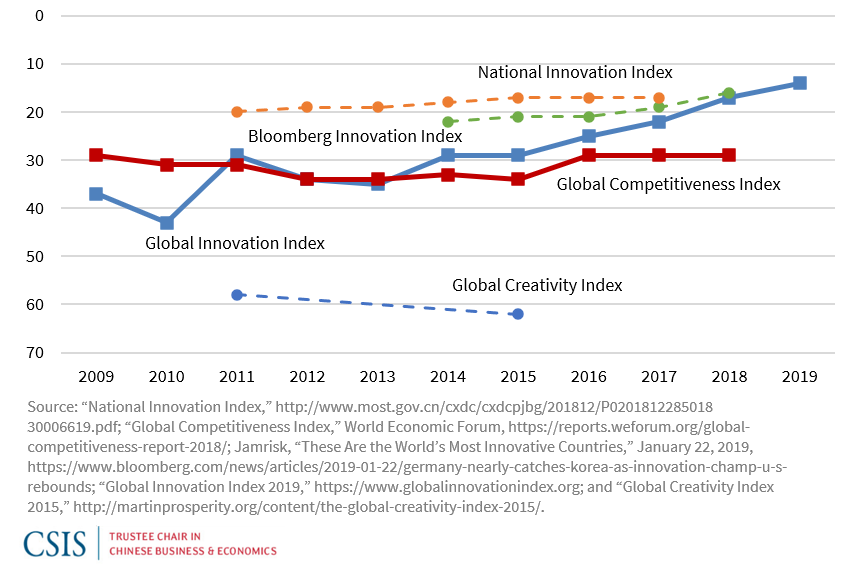 However, from 2016 to 2018, China’s rank in innovation in the Global Competitiveness Index remained at a rank of 29. Whereas the Global Innovation Index (GII) consists of 101 indicators that are primarily physical measures, the Global Competitiveness Index (GCI) is primarily based on survey results of the World Economic Forum’s annual Executive Opinion Survey. Its third sub-index “Innovation and Sophistication” consists of 15 survey questions and just one physical measure.

For example, GCI’s 2018 Executive Opinion Survey asked, “In your country, to what extent do companies have the capacity to innovate?” On a scale of 1-7 with 7 being “to a great extent,” China received a 4.5, yet was only ranked 44 among 137 countries. In contrast to the flowery image pictured by numerical data, such as “the highest number of patent grants” and “the highest percent of firms offering formal training”, the perception on China’s innovation among the business community reflected by GCI does not generate an equal amount of confidence.