Thunder Out of Congress on China

The Trump administration has been rolling out new measures on China seemingly almost every day. All of them involve countering China in one way or another, often through expanded restrictions on some aspect of the relationship, from adding Chinese firms to the Entity List to expelling journalists and imposing penalties on Beijing for passage of its harsh national security law on Hong Kong. The institution at the other end of Pennsylvania Avenue has also ramped up its activity on China. By some measures the 116th Congress has been more outspoken on China than any of its predecessors.

Congress has played an important role on China policy for many decades, including the Taiwan Relations Act (1979), sanctions following Tiananmen Square, the annual most favored nation (MFN)-extension votes, and the decision to give China permanent normal trade relations (PNTR) in 1999. Some of the most important legislation is not China specific but still has a huge effect on bilateral relations. The two most obvious recent examples are the Foreign Investment Risk Review Modernization Act of 2018 (FIRRMA) and the Export Control Reform Act of 2018 (ECRA), both passed as part of the John S. McCain National Defense Authorization Act for Fiscal Year 2019, to update, respectively, rules related to investment screening and exports of sensitive technologies. China was not singled out in the legislation, but the framing and drafting of both were done with the People’s Republic of China (PRC) in mind.

The last two years, though, have witnessed a huge jump in Congressional activity. The clearest way to see this is to track China-related legislation, which one can do by using the Congress.gov database. (Our data primarily comes from the US-China Business Council’s Congressional Legislative Tracker, which catalogues legislation contained in Congress.gov. We supplemented this source with our own additional research.) The data reveal an astonishing level of activity: at least 366 bills with China-related content have been introduced since the beginning of the 116th Congress in January 2019. (This does not include another 75 non-binding resolutions related to China, which we do not systematically analyze here.) Most bills address a single issue, but some cover multiple China-related topics. As Figure 1 shows, the greatest focus, not surprisingly, has been on trade, commerce and investment. But the proposed legislation runs the gamut of issues, including supply chain security, defense and national security, human rights and democracy, the coronavirus, and immigration.

Another big takeaway is the increase in the tempo of legislation. There has been a huge wave of China-related bills introduced over the past six months, beginning with an initial jump in March and then followed by a huge spike in May. As one would expect, much of this activity is in response to the pandemic, including holding China accountable for the outbreak, addressing supply chain vulnerabilities and expanding domestic manufacturing capacity. But few issues have been left untouched. The steep rise in introduced legislation reflects the rising salience of China in many aspects of American foreign policy and domestic life, and with it, the political importance for members of Congress to get involved in China policy.

Applying a partisan lens to the data reveals noticeable similarities and differences between Republicans and Democrats on China. Republican members of Congress have been somewhat more active than their Democratic counterparts. As Figure 3 shows, if measured by the number of introduced bills, those introduced with only Republican sponsors has risen during this calendar year and really jumped dramatically in May. The number of bills introduced with only Democratic Party sponsors or with sponsors from both parties (“Bipartisan”) have not risen as much. Though not the only factor, the spike in Republican-sponsored legislation coincided with the formation of the House Republican China Task Force, which is geared toward having Republicans coordinate legislation.

On the other hand, attention to China has risen significantly by members of both parties in both houses. If measured by the number of sponsors and co-sponsors (right-hand side of Figure 3), Democrats outnumbered Republicans in the last quarter of 2019. During 2020, Republicans have held an edge in total number of sponsors and co-sponsors, but the trend lines are remarkably similar.

Although there has been a large jump in the number of bills introduced by members of both parties, as Figure 4 shows, there has not been an equivalent rise in the number of enacted laws. According to the collected data, of the 366 bills introduced, 19 were passed only by the House of Representatives, 7 made it through only the Senate, and just 12 passed both houses and were signed into law by the President. Of course, some bills that are introduced individually end up being folded into a larger appropriations or authorization bill or some other vehicle, and there is still time for some other bills to be adopted before this session closes. Nevertheless, the basic conclusion still stands; a lot more ideas have been proposed than have been adopted. And so, from a quantitative point of view, as the Chinese saying goes, there’s been “loud thunder but little rain” (雷声大雨点小). 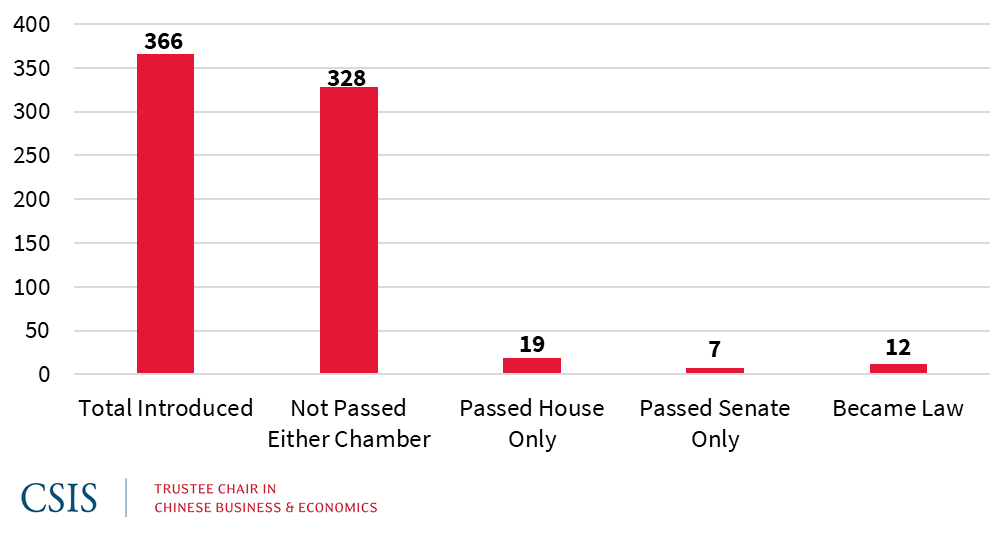 Nevertheless, the 12 bills that have been introduced and made it into law so far in the 116th Congress have been impactful (see Figure 5). The “Secure 5G and Beyond Act of 2019” will mean greater investments in critical infrastructure technology from trusted (non-Chinese) suppliers. According to the Washington Post, the National Defense Authorization Act for FY2020, passed in December 2019, references China over 200 times in its conference report and includes a large number of measures meant to counter China’s growing military prowess. The two laws on Hong Kong show that US concern about the city is shared by both the Executive branch and Congress and is fully bipartisan, and so one can expect sustained U.S. opposition to the encroachments on Hong Kong’s autonomy and the violation of Beijing’s commitment to maintain the “one country, two systems” in word and deed until at least 2047. In fact, the prominence of bipartisan concern on China policy more generally stands out, particularly in an era when there are wide partisan gulfs on so many other areas.

Although the vast majority of introduced bills haven’t made it to the President’s desk (and in most cases, even out of committee), Congress has had a growing effect on American China policy. Moreover, Congressional attention to China is unlikely to wane. Quite the contrary, we should expect it to continue to expand in the coming years. This will be reflected not only in introduced and adopted bills and resolutions, but also through hearings meant to shed light on critical issues as well as hold the executive branch accountable, investigations, and congressional letters to executive branch officials and agencies. Hence, the thunder we witnessed this year may be followed by a deluge of rain when the 117th Congress comes to order in January.

Scott Kennedy is Senior Adviser and Trustee Chair in Chinese Business & Economics at the Center for Strategic and International Studies. He is grateful to Trustee Chair Program Manager Alyssa Perez and Research Associate Shining Tan for their research assistance and to the US-China Business Council for access to their database.