Although the United States and the European Union both have strong security and economic interests in the Asia-Pacific, they have developed independent strategies for engagement that are on occasion misaligned. This half-day conference will explore new ways that the EU and the U.S. can enhance cooperation in the region with panels addressing trade and investment and security issues.

2:45 p.m. Panel I: TPP and Beyond: Understanding Future Trade Dynamics and Investment Architecture in the Asia-Pacific Region

Mr. Moreno Bertoldi
Special Adviser to the Ambassador
Delegation of the European Union to the United States

4:00 p.m. Panel II: "Better Together" in the Asia-Pacific Region: Transatlantic Engagement on Security

Mr. Klaus Botzet
Head of the Political, Security, and Development Section
Delegation of the European Union to the United States

Moderated By:
Ms. Heather A. Conley
Senior Vice President for Europe, Eurasia, and the Arctic
CSIS

Transatlantic Relations and the Indo-Pacific: Implications for Japan and Korea
March 18, 2021
Commentary 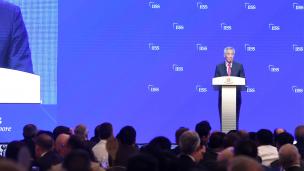 The Choice for Southeast Asia Isn’t between the United States and China
June 21, 2019