With an Introduction by:

Please join us for a bipartisan conversation on the future of NATO and the challenges that lie ahead for the transatlantic security relationship. On the eve of the Munich Security Conference, Senator McCain and Senator Murphy will provide their perspectives regarding the current state of European defense, the regional and global security challenges NATO faces, and the future role of NATO's partnership program as the Alliance prepares for a defining summit in September. 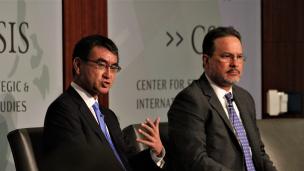 Managing the Risk of Tech Transfer to China
October 29, 2019