On a recent visit to Africa, President Recep Tayyip Erdoğan of Turkey said “What [my] African brothers have longed for for years are true friends who respect their history, culture, traditions, languages” and that Turkey “[wants] to be true friends of Africa.”1 Erdoğan views Turkey as a global power with global reach, which is why he pursues a foreign policy agenda that emulates his view of the Turkish Republic.2 The Erdoğan-led Turkish government has thus worked to increase engagement across the world, often in less developed regions such as Africa and Latin America. In Africa, for example, Turkey now has 41 embassies, up from 12 in 2003. In 2017, Turkey opened its largest military base overseas in Mogadishu, starting trainings with Somali National Army soldiers.3 The state-run Turkish Airlines now flies 52 routes from Istanbul to 33 different African countries, when it only flew to 14 in 2011.4 Economically, Turkey has increased bilateral trade with Africa five-fold from 2003 to over $20 billion in 2018.5 Leaders within the African Union (AU) have stated that Erdoğan has “won hearts and minds” through his humanitarian assistance and support for Muslim communities.6 Africa is 54 countries strong, and Erdoğan views his increased engagement across Africa as a way for Turkey to achieve greater global relevance. However, Erdoğan sees the existing network of Fetullah Gülen-affiliated institutions and schools across the African continent as an impediment to his growing Turkey-Africa partnerships, as he blames

Turkey's increased expansion into Africa is a component of Erdoğan’s big-picture foreign policy agenda to take Turkey closer to the status of global power.

Gülen for orchestrating the July 15, 2016 coup attempt on his government. Therefore, Erdoğan has made a concerted effort to relieve countries of these networks, making economic, cultural, and security deals contingent on the closure of Gülen institutions. Turkey’s increased expansion into Africa is a component of Erdoğan’s big-picture foreign policy agenda, often characterized as Neo- Ottoman, to take Turkey closer to the status of global power.

Over the course of Erdoğan’s rise to power, Turkish foreign policy has expanded into the African continent as never before seen in the republic’s history, making headlines with his major humanitarian contributions and economic cooperation agreements.7 Erdoğan has visited 26 African countries, a record for a non-African head of state, and has the goal of building Turkish diplomatic presence in every country on the continent.8 The origins of Turkey’s foreign policy approach to Africa date back to Ahmet Davutoğlu, the former prime minister of Turkey. His vision for Turkey, most notably articulated in his 2001 book Strategic Depth (Stratejik Derinlik), is often referred to as “Neo-Ottomanism” due to its vision of expanding Turkish engagement across the globe, especially in areas of former Ottoman influence. Davutoğlu wanted “to make Turkey a center of stability in surrounding regions and a country providing a new vision. . . for international relations.”9 The ruling Justice and Development Party’s (AKP) under President Erdoğan’s leadership has continued to articulate this vision for Turkey even after Davutoğlu’s departure.
In 2011, Turkey credited itself as being one of the only countries that supported Somalia after its devasting famine. Erdoğan was the first non-African head of state to visit the country in 20 years.10 Since then, the Turkish-Somali relationship has flourished, moving from humanitarian aid to now include security cooperation programs.11 In the fall of 2017, Erdoğan opened a Turkish military base in Mogadishu worth $50 million, Ankara’s largest overseas base.12 “We are doing our best to help our Somali brothers and sisters in terms of restructuring, equipping, and training the Somali armed forces,” said Mehmet Yasin Kalın, the commander of the base.13 A few months later, Erdoğan announced in Khartoum that Sudanese President Omar Al-Bashir had issued a decree granting the Turks a 99-year lease to restore Ottoman ruins on Suakin Island, located off the coast of Sudan in the Red Sea. Erdoğan said that they would “restore and make it worthy of its historical glory.” Before the formal announcement, there were suspicions that Turkey was trying to acquire access to the island to build a military base there.14

Not only has Turkey taken on major infrastructure projects across the continent, such as the construction of roads and railways, but it has also exercised other soft power tools to positively influence African perceptions of Turkey. The Turkish government has opened “maternal and child care centers in Niger, women’s shelters in Cameroon and a vocational training center in Madagascar.”15 As more countries are engaging with Africa, African leaders themselves have started finding alternatives to China when deciding who should build the next road or hospital.

For example, the Turkish construction company Yapı Merkezi won a $3 billion railway project deal in Ethiopia and Tanzania over Chinese competitors.16 A local resident recounted that “The Turkish workers know how to live and work with the local community” because they “have a similar culture.”17 Turkey has capitalized on gaining popularity within Africa’s Muslim populations, particularly in the Horn of Africa, where communities tend to be more sympathetic to Erdoğan’s overtures. Even First Lady Emine Erdoğan has taken on her own women’s empowerment project in Africa, which she discussed at the 2018 U.N. General Assembly.18 Turkish TV dramas have also gained increased popularity in African countries such as Sudan, Ghana, and Kenya, which expose African people to Turkish tourist destinations, food, and Turkey’s perceived “modern and progressive society,” as one Sudanese viewer reflected.19 All of these elements contribute to making African leaders more willing to concede to Erdoğan’s wishes, whether they be about closing down Gülen schools or opening more Turkish embassies. The Turkish government has simultaneously been playing up its anti-Western rhetoric in its public diplomacy campaigns. On a trip to Zambia, President Erdoğan said that Turkey is “not going to Africa to take their gold and natural resources as Westerners have done in the past” but instead that Turkey is building a “solid and sustainable partnership based on mutual benefits.”20 Although the Ottoman Empire only held minor parts of North Africa, the Turkish Ministry of Foreign Affairs highlights that “the Ottoman Empire prevented colonial expansion in North Africa . . . and East Africa.”21

As Turkey builds up its relations with African countries, the Gulf states are taking notice and beginning to push back, bringing their traditional rivalries with them from the Middle East and competing with Turkey’s rapid expansion of diplomatic missions across the continent. Crown Prince Mohammad bin Salman of Saudi Arabia criticized Erdoğan for trying to build an “Ottoman caliphate” in the region.22,23 The Gulf-aligned Egyptians have also been agitated by Turkey’s encroachment into its own backyard and were particularly concerned with Turkey’s negotiations with Sudan surrounding Suakin Island, which ultimately led to greater tensions between Egypt and Sudan.24 As a response to Turkey’s increased presence across the Horn of Africa, it is no surprise that the Egyptians, and its Gulf partners, have tried to exert more influence themselves in the region.

Erdogan has painted Turkey’s commercial, security, and cultural engagements  in Africa as mutually beneficial. However, the aid and security assistance accompanying strengthened diplomatic ties has come at a cost. Following the July 15, 2016 coup attempt, Turkey began an international effort to shut down all institutions affiliated with the U.S.-based Muslim cleric Fetullah Gülen, who is accused of orchestrating the coup. To date, Erdoğan has successfully negotiated with 29 African countries to close down all of the Gülen-affiliated schools in their countries, with several more countries currently working with the Turkish government on future closures.25 With these agreements, Erdoğan pledges to open new Turkish schools to replace the former Gülen-affiliated African institutions through the state-run Maarif Foundation, founded in 2016 specifically as part of this effort.26 The foundation’s president, Birol Akgün, has repeatedly said that Western countries (such as the United States, which has more than 140 Gülen schools) refuse to hand over these institutions, but that the foundation has made more progress in Africa.27 “We’re having positive reception from countries especially in Africa, we have made some progress and transferred the control of a prominent number of schools to our administration,” Akgün said.28

Due to Erdoğan’s increased pressure, Senegal has closed more than a dozen schools, which catered to more than 3,000 students.29 “Our cooperation with Senegal in combating FETO is to continue. Shutting down of FETO-linked schools is very, very important,” Erdoğan said.30 South Africa recently closed 11 Gülen schools which taught 2,800 students.31 Angola cited “national security reasons” behind shutting down its schools, while the Rwandan Ministry of Education announced that it would shut down a Gülen-affiliated school only two months after it opened.32 Ethiopia, Mali, Tanzania, Benin, Niger, and Madagascar, among many others, have all similarly shut down their Gülen schools. Another handful of countries, which include Zambia and Ghana, are in the process of shutting them down after pressure from the Erdoğan government. Following the July 2016 coup attempt, it is clear that Turkey has been able to increase pressure on African leaders to shut down Gülen schools at Ankara’s demand, leaving many families and students angry and without a school to attend in the interim.33 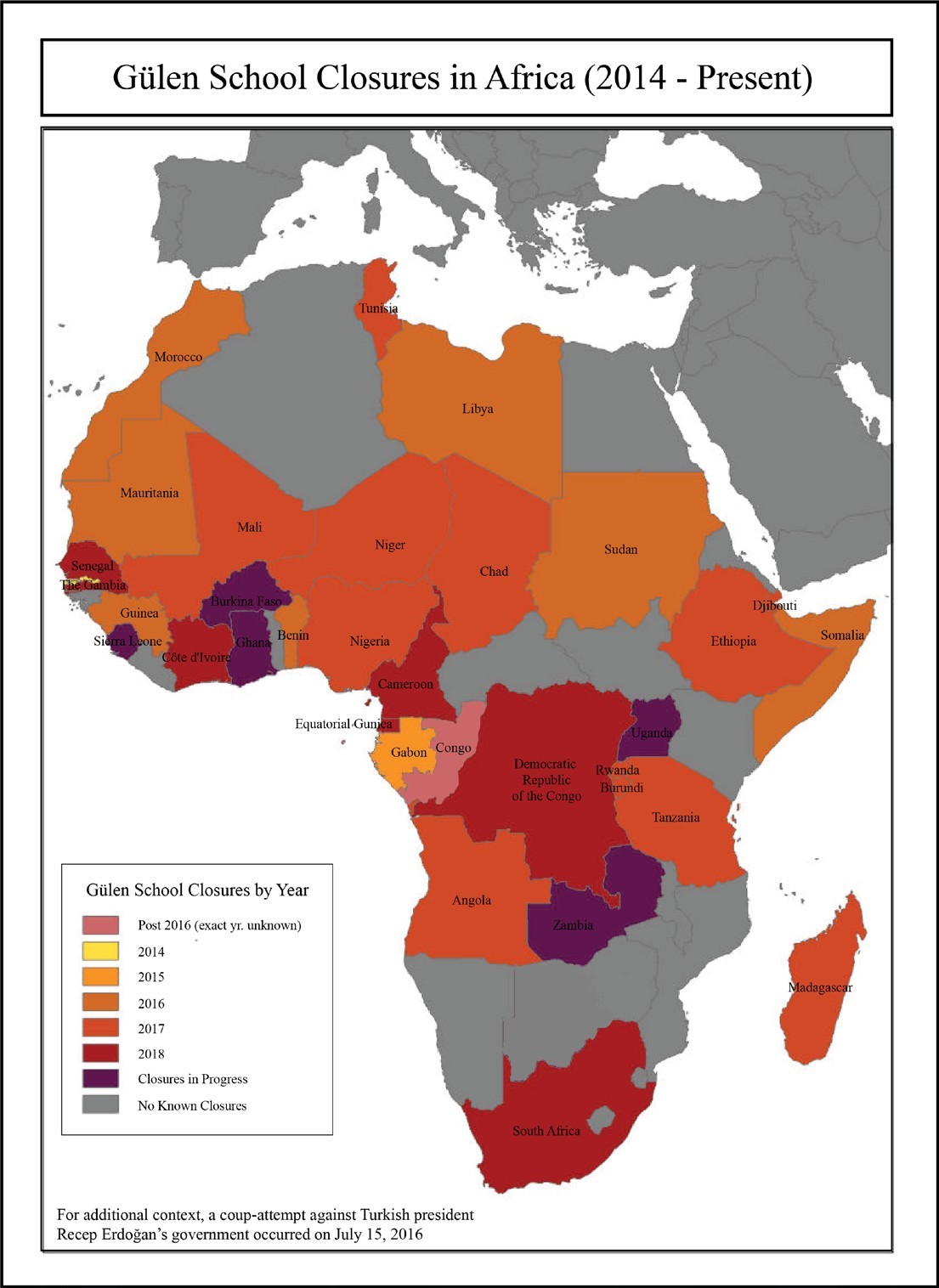 By bringing more diplomatic reach through its embassies and supplying aid to various pockets of Africa, Turkey has been able to garner the political buy-in it needs to encourage the closure of Gülen affiliated schools. Erdoğan has brought his domestic fight against Gülenists to the international arena. Part of President Erdogan’s foreign policy agenda is to turn Turkey into a global power, while also taking the country back to the glory days of the Ottoman Empire. By shutting down Gülen schools in almost 30 African countries (and counting), Erdoğan sees himself as putting down possible threats to Turkey’s global expansion efforts.