Adam Isles is a managing director at the Chertoff Group, LLC. His areas of focus include security risk management practices, threat detection technology, analytics, cyber security, privacy and market assessment. He was most recently director of strategy and policy consulting on homeland security for Raytheon Company, a technology and innovation leader specializing in defense, homeland security, and other government markets throughout the world. Before joining Raytheon, Isles served with the U.S. Department of Homeland Security, where he was appointed deputy chief of staff in January 2007. In that position, he worked daily with the secretary to coordinate departmental operations and to help manage incidents. Additionally, he worked on numerous border security and identity management initiatives, such as the Western Hemisphere Travel Initiative, Visa Waiver Program modernization, and migration to 10-fingerprint capture in the US-VISIT program. His portfolio also included the Secure Border Initiative, plus transportation security matters, including aviation passenger checkpoint modernization, general aviation security, and transportation security vetting programs. He also assisted the secretary on planning for the 2009 Presidential Inauguration, plus the federal response to Hurricanes Gustav and Ike (2008), the California wildfires (2007), and the failed UK aviation terror plot (2006). Earlier, he served as counselor to the secretary, focusing on border and transportation security policy and operational matters. He also coordinated the secretary's international activities.

Before joining the Department of Homeland Security, Isles was counsel to the assistant attorney general of the Criminal Division at the U.S. Department of Justice, where he provided legal advice on terrorism, high-tech crime, and related national security matters. He also served as secretary of the G-8 High-Tech Crime Experts Group. Between 2002 and 2003, he served as director of international economic affairs at the National Security Council, where he coordinated U.S. planning efforts for the first G-8 Summit after 9/11. Isles began his law enforcement career as a trial attorney in the Criminal Division, and he also has criminal litigation experience as a special assistant U.S. attorney in the eastern district of Virginia. He holds a J.D. degree from Harvard Law School and a B.A. degree in history from Yale University.

Most Recent From Adam Isles 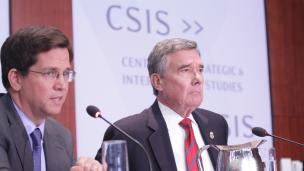