Dr. Catherine Lotrionte was a Brent Scowcroft Scholar at the Atlantic Council with the Cyber Statecraft Initiative in the Scowcroft Center for Strategy and Security. She is also the founder and former director of the CyberProject at Georgetown University, where she has taught and written on international and national security law, international affairs, and technology. She founded the CyberProject in 2008, focusing on the role of international and domestic law in recent and emerging developments in the proliferation of weapons, technology, and threats. Dr. Lotrionte previously served as counsel to the President’s Foreign Intelligence Advisory Board at the White House, on the Joint Inquiry Committee of the Senate Select Committee on Intelligence, as an assistant general counsel at the Central Intelligence Agency, and in the U.S. Department of Justice. Dr. Lotrionte holds an M.A. and Ph.D. from Georgetown University and a J.D. from New York University. 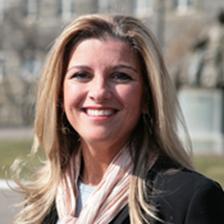