Colonel Danielle Ngo is an active-duty Army officer with over 30 years of service. She was born in Vietnam and was evacuated by the United States at the end of the Vietnam War with her mother and sister. She joins the Center for Strategic and International Studies after serving as the executive officer for the U.S. Army Pacific commander in Hawaii, then as the executive officer for the U.S. Army inspector general. Previously, she commanded an operational engineer brigade in the Pacific, served in leadership assignments throughout the United States and overseas including deployments to Bosnia, Iraq, and Afghanistan. During her commands, her units assisted with two of the largest and most destructive wildfires in Colorado history, the Waldo Canyon and Black Forest Fires, and provided humanitarian assistance and military construction throughout the Pacific from Hawaii to Korea. She also participated in the U.S.-China Disaster Management Exchange in Kunming while in command. When not serving operationally, she has held positions as a joint chiefs of staff intern, the chief of engineer maneuver support organizations, and the military assistant to the chairman of the NATO Military Committee. Colonel Ngo holds a distinguished graduate master’s degree in strategic studies from the U.S. Army War College (USAWC), a master’s in theater studies from the Army Command and General Staff College (CGSC), and a master’s degree in public policy from Georgetown University. She is also certified as a project management professional (PMP). 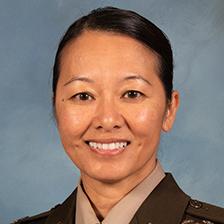