Howard Leach is a business executive and private investor. He serves as president of Leach Capital, LLC as well as Foley Timber & Land Company. Mr. Leach was sworn in as U.S. ambassador to France on July 16, 2001. He completed his service in France on April 15, 2005. He was also a member of the Board of Regents of the University of California from 1990 to 2001. He served as chairman of the Board of Regents from 1993 to 1995. Mr. Leach is a graduate of Yale University and attended Stanford Graduate School of Business. He attended school in Salinas, California, and graduated from Salinas Union High School in 1948. He served as an officer in the U.S. Air Force from 1953 through 1955. Mr. Leach has served as director of various companies, including as chairman of Hunter Fan Company in Memphis, Tennessee, and Shippers Development Company in Salinas, California. Mr. Leach is active in civic activities and serves on the boards of the American Friends of Versailles, the American University of Paris, the French-American Foundation, the French Heritage Society, the Lehman Brothers Advisory Board, the Haas Business School at the University of California at Berkeley, and as an overseer of the Hoover Institution at Stanford University. Mr. Leach has been active in Republican politics for many years in the support of candidates and in California and national fund raising. He served as finance chairman of the Republican National Committee from 1995 to 1997. 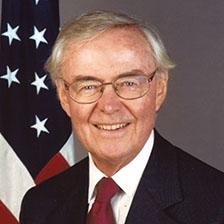