John Hammergren served as chief executive officer and chairman of the Board of Directors of McKesson Corporation for nearly 20 years, retiring in 2019. Mr. Hammergren joined McKesson in 1996 as president of McKesson Health Systems. In the time since Mr. Hammergren became CEO, the company more than quadrupled revenues, emerging as the premier company in healthcare distribution and healthcare technology innovation, with over $200 billion in annual revenue. McKesson expanded into global markets while advancing to one of the top 10 on the Fortune 500 list. McKesson rewarded customers with unique solutions to the challenges in patient care, improving patient care quality, and increasing efficiency. Simultaneously, the company provided shareholders more than a 17 percent compound annual return during Mr. Hammergren’s tenure. Recognizing his tremendous track record of success, Harvard Business Review named Hammergren one of their 100 top performing CEOs in the world. In addition, buy-side analysts, money managers, and sell-side researchers identified Hammergren as the 2015 best CEO for the health care technology and distribution segment. Mr. Hammergren served as chairman of the Healthcare Leadership Council and was a member of the Business Roundtable and of the Business Council. He continues to assist numerous charities and small companies with both financial support and advice. Mr. Hammergren holds a B.A. in business administration from the University of Minnesota and an M.B.A. from Xavier University in Cincinnati. As a young man he achieved the rank of Eagle Scout, an achievement reached by only 4 percent of Boy Scouts in America. He is the coauthor of Skin in the Game: How Putting Yourself First Today Will Revolutionize Health Care Tomorrow (Wiley, 2008). 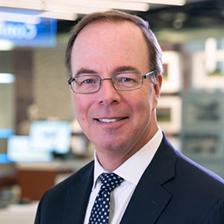 Most Recent From John H. Hammergren