Tim Adams is managing director of Institute of International Finance and a senior adviser at CSIS. Previously, Mr. Adams served as under secretary of the treasury for international affairs, where he was the George W. Bush administration’s point person on international financial and economic issues, including G-7/G-20 meetings and IMF issues. Prior to serving as under secretary, he was chief of staff to both Treasury Secretary Paul O’Neill and Treasury Secretary John Snow. He was policy director for the Bush reelection campaign in 2004 and also a member of the policy staff during the 2000 campaign. Mr. Adams also served in the White House under President George H.W. Bush at the Office of Policy Development. In 1993, Mr. Adams cofounded the G-7 Group, a Washington-based global financial markets advisory firm. Mr. Adams holds a B.S. in finance, an M.A. in international relations, and an M.P.A. from the University of Kentucky. He is a member of the Council on Foreign Relations and a board member of the Atlantic Council and the Center for Global Development. 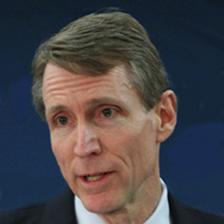 Most Recent From Tim Adams

Chinese Financial Reform
April 4, 2013
View all content by this expert