Engaging Nigerian officials, civil society activists, opinion leaders, and their U.S. counterparts on Nigeria's 2015 elections and the governance agenda beyond.
The CSIS Nigeria Forum was an event-based series highlighting the priority issues and challenges in the run-up to Nigeria's 2015 elections. Supported by the Ford Foundation, the series brought leading Nigerians to Washington, D.C. to engage with U.S. policymakers and Africa experts on ways to promote peaceful, credible, and free elections, and generate momentum on broader issues of good governance.

Audio: The Backstory on Boko Haram and the Kidnapped Girls
As part of the CSIS “Smart Women, Smart Power” speaker series, Jennifer Cooke talked to Nina Easton about the rise of Boko Haram, the kidnapped girls and the Nigerian government’s failure to rescue them, and the implications of the upcoming presidential election.

Countdown to Nigeria’s Elections: Minimizing the Dangers
By Jennifer Cooke and Richard Downie

Elections have always been high-stakes affairs in Nigeria but the buildup to the 2015 elections has been accompanied by unprecedented levels of tension and anxiety. Two closely matched parties—the People’s Democratic Party (PDP) of President Goodluck Jonathan and the opposition All Progressives Congress (APC) led by General Muhammadu Buhari—appear confident of securing victory. Inflammatory rhetoric and violence have already marred the campaign period. Both main parties appear to believe that the only way they can be denied victory is through fraudulent means. It is still possible for Nigeria to build upon the democratic progress made in 2011 but in order to do so, all the main stakeholders must perform with diligence, professionalism, integrity, and—above all—respect for the process.

The national elections in Nigeria, scheduled for February 2015, come at a critical point in the country’s history. The vote carries high stakes for governance, security, and the economy and will have ramifications for Africa as a whole. Nigeria is the continent’s most populous country, with an estimated 170 million inhabitants, and its largest economy, with a 2013 GDP of $509 billion. This election primer provides an overview of Nigeria’s political history, major parties and candidates, and electoral process and outlines what is at stake and what will decide the upcoming elections.

On January 15-16, CSIS hosted a two-day conference in collaboration with the Savannah Center for Diplomacy, Democracy, and Development in Abuja. Participants included senior representatives from the two main parties, members of INEC, high-level personnel from Nigeria’s security agencies, civil society leaders, and journalists. Out of the two day conference came a report that synthesizes some of the main findings from the Abuja conference and its predecessors, identifies some of the risk factors, offers some recommendations to the main constituencies, and considers the role of the United States in supporting the process.

Our third session, held on Monday, July 14, "Security and Nigeria's National Elections," focused on the major security challenges facing Nigeria as its 2015 national elections approach. Featuring Assistant Secretary of State for African Affairs Linda Thomas-Greenfield, the session examined the security situation at the national level and highlighted innovative strategies being employed on the ground in violence-prone communities to anticipate, prevent, and militate against conflict.

The Role of the Federal Government of Nigeria in Providing Security Before, During, and After the February 2015 Elections
Ambassador Clement Layiwola Laseinde
Director, Policy & Strategy, Office of the National Security Adviser

Watch: Security and Nigeria's National Elections
Our second session, held on April 7, 2014, "Political Parties and Nigeria's Electoral Process," featured a discussion on the critical roles and responsibilities of Nigeria’s political leaders, candidates, and party supporters in delivering a credible election result and ensuring the safety of the electorate. Despite many political differences between the two parties on hand, the People's Democratic Party (PDP) and the All Progressives Congress (APC), and a sometimes vigorous debate in the public forum (video below), a number of areas of common ground became evident during their two-day visit to D.C. and the delegates ultimately agreed to a common set of principles and a possible plan of action, enshrined in this communique on electoral conduct.

Our first session, held January 27, 2014, "Preparing for Nigeria’s 2015 Elections: Key Challenges and Priorities," identified the big electoral roadblocks to overcome before 2015 and considered what the United States can do to support Nigeria as it enters a pivotal election period.

You can view INEC Chairman Attahiru Jega’s presentation on the state of preparations for the 2015 elections here. 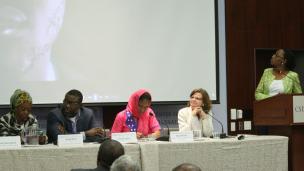