Mexico 2012: Tracking Democracy in a Time of Uncertainty

This project examines political developments in Mexico leading up to the 2012 presidential election.

Mexico 2012 focuses on current and future developments that will affect Mexican economic governance, political stability, and central issues in the bilateral relationship with the United States, including immigration, security, and trade.

The importance of the United States bilateral relationship with Mexico is clear. The 2,000 mile border shared by the two nations, the estimated 400-500 thousand undocumented migrants every year that enter the United States from its southern neighbor, the high levels of economic interdependence and the growing drug related violence throughout Mexico all highlight the strategic nature of U.S. interests to its immediate south.

Following the presidential election of 2012 in Mexico, the return of Partido Revolucionario Institucional (PRI) will determine the future of political and economic reforms that have been initiated over the last decade. The election will also have a far reaching effect on the institutional cooperation that has been built up between Mexico and the United States since 2006, particularly in the area of security. The profound shift in the balance of political power in Mexico should be a priority issue for U.S. officials and analysts looking at the future of the bilateral relationship and the North American region.

For this project, lead investigator Duncan Wood will relase weekly reports of the political situation in Mexico through the Americas Program blog and regular updates to the project's twitter feed. Regular podcasts wil also be made available summarizing recent events. The project will also feature quaterly publications examining various topics pertinent to the 2012 presidential election.  Following the election in July 2012, a conference will be held at CSIS focusing on the aftermath of the election and a compendium of publications, with project conclusions, will be made available.

This project is made possible by the Tinker Foundation.

Between a Rock and a Hard Place: Opinion Poll Performance in the 2012 Mexican Presidential Election
February 27, 2013
Report

Mexico: From the PAN to the PRI— A Preview of the Next Sexenio
January 8, 2013
Report 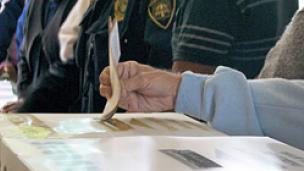 PRI Party Makes a Comeback in Mexico—Why and What's Next?
July 2, 2012
Newsletter

Mexico's July 1 Gubernatorial Races and Their Impact on the Presidential Contest
June 25, 2012
Report

Mexico's Election and the Economy - Voters Face a Tough Decision
May 17, 2012
View all content associated with this program