CSIS and the Strengthening of America project mourn the loss of Senator Warren Rudman, 1930-2012. (photo courtesy of http://speakermix.com)

Former U.S. senators Sam Nunn (D-GA), Pete Domenici (R-NM), Warren Rudman (R-NH), and Evan Bayh (D-IN) have convened a bipartisan group of former senators and representatives to come together for four forums to raise public consciousness of the country’s growing and unsustainable debt. They are calling their effort, Strengthening of America—Our Children’s Future.

“We believe that while the worst effects of the national debt are probably long term, there is an urgency to this issue that no longer allows us to kick the can down the road,” said the four former senators in a joint statement.

“Neither party seems willing to address this issue with either common sense or simple arithmetic. There are current members of both parties, however, who understand the stakes and who are willing to work together by putting the country first. We hope to support, strengthen, and help add to that group.”

By Pete Domenici and Sam Nunn From the Washington Post Published: October 26

Once Election Day passes, attention will quickly turn to whether and how to avoid the “fiscal cliff.”

Neither presidential candidate has stepped up to fully embrace the Simpson-Bowles commission’s recommendations. Neither has explicitly rejected them, either. That’s promising because the panel offered a thoughtful, comprehensive plan to stabilize the federal debt over the next decade. A parallel effort by the Bipartisan Policy Center, led by one of us and Alice Rivlin, came to similar conclusions. Read More

The effort is a joint project of the following organizations:

Strengthening of America—Our Children’s Future, is also working closely and coordinating with the Campaign to Fix the Debt (see letter of support), the Comeback America Initiative, and the Peter G. Peterson Foundation’s ongoing efforts to call attention to the fiscal challenges threatening America’s future. 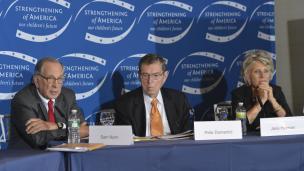 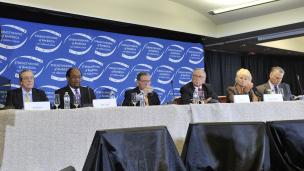 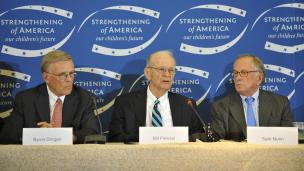 Robert Rubin and James A. Baker, III on the Economic and Foreign Policy Implications of America’s Debt
September 12, 2012
Press Release