The Williamsburg-CSIS Global Forum holds major international conferences in Williamsburg, VA, and Washington, DC, to promote the development of effective political and economic cultures and systems in parts of the world where they are weak or lacking

At a time when political institutions are in flux in many parts of the world, the Williamsburg-CSIS Global Forum aims to promote the development of effective political and economic systems in areas where they are weak or lacking. The Forum was established in January, 2013, by CSIS and the Colonial Williamsburg Foundation, in cooperation with the Wendy and Emery Reves Center for International Studies at the College of William & Mary. It will hold a series of major international conferences, jointly in Williamsburg, VA, and Washington, DC.

The first conference, The New Egypt: Challenges of a Post-Revolutionary Era, will take place April 21- 25, 2013, and will explore the dramatic events following the fall of the Mubarak regime and the future course of Egypt’s difficult transition to democracy. The Forum will be attended by a wide range of Egyptian participants – including politicians, diplomats, business leaders, academics, military experts, economists, and media representatives – as well as U.S. authorities on the Middle East.

A significant goal of the sessions held in Williamsburg will be to assess whether lessons learned from past efforts to develop stable political cultures and institutions, such as the American Revolution and its aftermath, are helpful in considering contemporary political and economic challenges around the world.

These sessions will generally seek to place the formation of national unity and national identity in historical contexts.

Conference segments held at CSIS headquarters in Washington will focus more specifically on immediate policy challenges, such as, in the case of Egypt, the country’s future dealings with the West and other countries in the Middle East. Future conferences will cover European and African issues.

The aims of the Forum are to help countries and regions advance their visions of political and economic development, promote viable political cultures, and to familiarize experts with the latest thinking on these issues in different circles around the world - without espousing any particular system or path to better functioning governance.

Leading the Forum will be Reginald Dale, Director of the Williamsburg-CSIS Global Forum at CSIS, James Horn, Vice President of Research and Historical Interpretation at the Colonial Williamsburg Foundation, and Stephen E. Hanson, Vice Provost for International Affairs and Director of the Wendy and Emery Reves Center for International Studies at the College of William & Mary.

The Forum is made possible by generous support from Anita A. and James D. Timmons and other Colonial Williamsburg supporters.

The State of the (European) Union 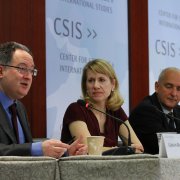