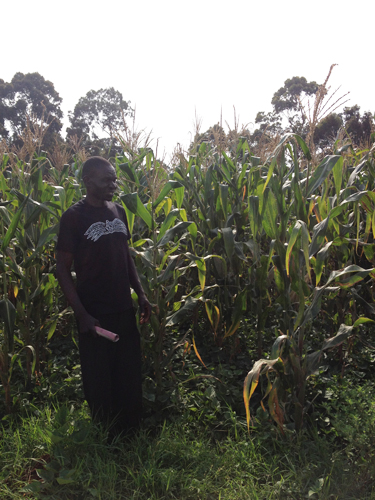 CSIS conducted a research trip to Kenya this past August, as part of our effort to assess the debate in East Africa over the use of GMOs to improve food security. We met with several government officials, USAID representatives, scientists and researchers, and other stakeholders, and spent a day with smallholder farmers in western Kenya, in Nyanza Province.

Throughout our conversations, we heard several recurring themes: first, the Kenyan government has done a tremendous amount of work in standing up biosafety protocols and regulatory authorities, but there are still significant barriers to the adoption of GM crops; second, there is a limited pipeline of GM products; and finally, the extension system is so weak that there is little ability to roll out existing and new technologies to farmers, especially to those who need it most -- smallholder subsistence farmers who are 75 percent of the Kenyan population.

Robust Regulatory Framework.
Kenya has put a significant amount of time and effort into developing its regulatory framework for biotechnology. There is a biosafety law in place, and as well as a new regulatory body to oversee and enforce it, the National Biosafety Authority (NBA). It was established in 2010, though the top-level management team has only been in place for roughly six months. The NBA is responsible for regulating all GM products, including GM food aid. It recently passed a labeling regulation requiring foods be labeled as GM if they meet or surpass a one percent threshold of GM product. There are high financial and legal risks to breaking this law – a fine up to 20million KES (~$240,000USD) and/or up to 10 years in jail. Many Kenyan stakeholders that we met with viewed this strict labeling requirement as a tacit opposition to the production of GM products by some key decisionmakers within the government. Not only will they be extremely onerous and costly, if not impossible, to enforce, but it sends a clear signal to potential producers that there is not a commercial market for GM products within Kenya. Trade specialists also predict that such a stringent labeling requirement could be perceived as an unnecessary trade barrier by the WTO. Of more immediate concern, the labeling requirement would also apply to foods sold at local open-air markets – where many Kenyans purchase their food. This means if you’re a small-scale farmer looking to sell you’re GM maize at your local market, you would have to label it.

However, should Kenya choose to move towards cultivating and commercializing GM crops, the people we spoke with widely agreed that there is potential for the labeling regulation to be changed. Because it is a regulation and not written into law, the change would only need to be passed by the Minister of Agriculture and not go through the parliament and prime minister’s office.

We Just Need Products.
During our interviews, we noticed a sense of exasperation among scientists and government officials with regards to the legal and regulatory debate over GM crops. Many felt that until a useful GM product is developed and ready to be released to the farmers, the debate will be theoretical, and may lose momentum.. As one gentleman told us, “you wouldn’t buy a car without getting to see and test-drive it first. Why would you fight to get GM if you don’t know what it can do for your farm?”

Currently, two crops are in the queue for release. Bt cotton is due out in 2014; and Bt maize is expected in 2017. There was some concern about these two crops as the debut commercially available products. Many farmers are averse to growing cotton because prices for the commodity have been falling and there is lack of local infrastructure to process it. More importantly, since cotton is not a food crop and many potential growers are subsistence farmers, they will be reluctant to plant it. Although maize is a staple of the Kenyan diet and there is much demand for an improved pest and drought resistant product, the bulk of research globally and in Kenya has been focused on yellow corn. Kenyans eat white maize. The potential for large-scale adoption for yellow maize may be limited by cultural traditions and taste preferences. There is a significant need for the timely development of products that are relevant to the food security of the Kenyan population.

Revitalize Extension.
One of our starkest observations was the dire need for extension to smallholder farmers. The government extension system in Kenya is woefully insufficient. In addition to a lack of extension agents, there are so many farmers of tiny plots and infrastructure is so poor that it is difficult to access everyone that needs assistance. Extension services should be a major priority for entities working with smallholder farmers throughout the country.

This is enormously important because without continuous outreach and education to farmers, new crops simply will not be adopted. Improving productivity means improving planting methods by teaching farmers to planting properly spaced rows, instead of scattering seeds; regularly weeding so the young plants aren’t choked out; and appropriately applying fertilizer to promote growth, but not waste money or cause unnecessary environmental degradation. Extension services, which may recommend farmers change the farming practices they have used for many years in favor of adopting new technologies, can be expensive and complicated. Innovative methods, such as the farmer-facilitator model used by the One Acre Fund, could be broadened or replicated throughout the region.

After an insightful trip, we learned that a great deal of progress has been made to establish a regulatory structure to manage agricultural biotechnology products. The next steps should be to support strong research efforts to develop good products quickly; and to be much more creative, innovative and serious about extension.

India: A Leader in the Green and Gene Revolutions Science and technology hold the key to develop high output agriculture. The challenge is to use new technologies creatively for the benefit of farmers and to make evidence-based decisions on deployment of these technologies. India is the best example of using the technology of hybrids during “Green Revolution” and achieving a food surplus in 1990 from food scarcity in 1965. Now, India is witnessing second green/gene revolution by using GMOs. Indicators of the extraordinary impact of Bt cotton in improving yields, saving pesticides cost, and as a result strong acceptance of Bt technology in cotton by Indian farmers is presented in the Second edition Status Report of Bt Cotton in India by APCoAB (Asia Pacific Consortium on Agriculture Biotechnology), published in 2009. Bt Cotton was approved through a rigorous governmental regulatory process. Thre is a lot of ongoing debate now for the release of another GMO food crop, Ex Egg plant.

East Africa should use the experience of India in adopting GMOs. Both yield enhancement and its stabilization are critical for feeding the global population, even more so in East Africa. It’s heartening to note that governments in Uganda, Tanzania and Kenya are in process of formulating the regulatory procedures for the release of GMOs. However, a lot of negativity is observed in the media due to myths and the irrational approach of some NGOs. One needs to be clear about why there is this negativity. In my opinion, technology is getting opposed because of opposition to multi-national corporations. Governments of these three nations need to evaluate whether the opposition to GMOs can be resolved provided they are released through the public sector as opposed to the private sector. The Green Revolution in India was witnessed through public-sector machinery (Indian council of Agriculture Research/State Agriculture Universities/National and State Seed Corporations) and now the second green/gene revolution is being experienced through the usage of technologies from the private sector.

Nirmal Seeds PLC Ethiopia is testing its cotton hybrids (Non GMO) in Ethiopia. They are performing well, through the Indian Germplasam base. During the process, I was pleased that the Ethiopian Government requested Nirmal Seeds try to release Bt Cotton in Ethiopia. However, regulatory procedures throughout East Africa need to be strengthened. I am sure that the experience of India can be best used and replicated in most East African nations. “Pathways to Productivity” can be one such effort to sensitize the issue.