Documentary films have also been an important multimedia tool for GHPC in recent years. With CSIS’s exceptional in-house capabilities for film production and editing, GHPC has produced a number of original documentaries. Each film features on-the-ground footage and original, on-camera interviews with subject matter experts. As our filmmaking capacities grow, GHPC will continue to integrate this essential multimedia platform as a main feature of the program’s work.

GHPC presents The Pandemic Paradox - HIV on the Edge, a five-episode docuseries and feature film on the risk of a resurgent HIV/AIDS epidemic four decades after the first case was reported and a few months into the coronavirus pandemic. The documentary project features many of the world’s most prominent and impactful voices on HIV/AIDS, such as National Institute of Allergy and Infectious Diseases director Anthony Fauci and former UNAIDS chief Peter Piot, and includes original footage and interviews of those living with the threat of HIV/AIDS in South Africa, Ukraine, and the American South and West.

The Gathering Health Storm Inside North Korea examines the rapid decay of North Korea’s health systems and the dangers the health situation in North Korea poses to neighboring countries, through interviews with experts on North Korea and health security and exclusive footage from inside the little-seen nation.

Healthcare and humanitarian workers are increasingly in the crosshairs as hospitals and aid centers have become part of the battlefield in today’s wars. The New Barbarianism is a GHPC original feature documentary that examines this crisis, its causes, the limited international response and possible ways forward through dozens of interviews and original footage obtained from inside Syria, Yemen and Afghanistan. It builds on several years of prior GHPC work on the intersection of health and security, the role of militaries, and the human tragedies seen in Syria and Yemen.

The New Barbarianism was awarded the Best Documentary prize at the LA Film Festival, aired on PBS, and was featured in the Christian Science Monitor, PBS NewsHour, and PBS’s Story in the Public Square.

Ebola in America: Epidemic of Fear is a groundbreaking documentary that illuminates how Americans experienced Ebola in 2014. 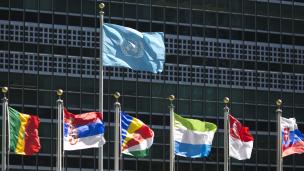 Reflections on UNGA and the Global Covid-19 Summit
September 24, 2021
View all content associated with this program