Defense in an Age of Austerity

Supporting a robust and candid public debate on the role and structure of the U.S. military during a responsible defense drawdown.

In order to comply with the Budget Control Act of 2011, the Department of Defense (DoD) will face a drawdown of uncertain magnitude. At a minimum, DoD will be forced to accept cuts of $450 billion in the coming decade, and in the absence of any “grand bargain” on federal government spending reductions and tax increases, this figure could be far higher, with sequestration expected to add another $500-600 billion in cuts. Given the potential scale of this drawdown, it is vital for security experts to engage in a robust and candid public debate on the role of the United States in international affairs and how the U.S. military should be structured to best support this role.

To facilitate such a debate, the Center for Strategic and International Studies (CSIS), with support from the Office of the Under Secretary of Defense for Policy, hosted a one-day conference in September 29, 2011 that convened experts from across the ideological spectrum to deliberate the proper alignment of the “ends, ways, and means” of U.S. defense strategy in a fiscally constrained environment. This conference, Defense in an Age of Austerity, included three panels composed of prominent security and defense experts that addressed the formulation of U.S. defense strategy, as well as a fourth panel tasked with examining the impact of the defense drawdown on the domestic economy, the defense budget, and the defense-industrial base. In addition, former Secretary of Defense William Cohen delivered the keynote address.

Additionally, CSIS produced a report with the Conference's findings.

Interim Report—Planning for a Deep Defense Drawdown—Part I
By Clark A. Murdock
May 24, 2012
Report

Defense in an Age of Austerity
By Clark A. Murdock
October 31, 2011
On Demand Event 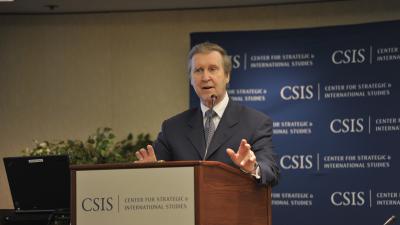 Interim Report—Planning for a Deep Defense Drawdown—Part I
By Clark A. Murdock
May 24, 2012
On Demand Event 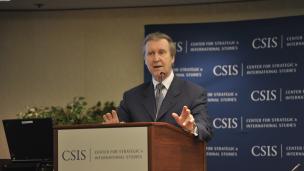 Defense in an Age of Austerity
September 29, 2011
View all content associated with this program