The Democracy in U.S. Security Strategy Project helps understand the strategic community’s perceived shortfalls in democracy promotion today and shapes alternatives for how it might be recast.

Strategic thinker Raymond Aron counseled, “the strength of a great power is diminished if it ceases to serve an idea.” Without such an idea today, the United States risks eroding its great power status by making other states more likely to resist and balance against it. From the Founding Fathers through Wilson’s Fourteen Points to the Reagan, Clinton, and Bush administrations, the United States has pursued some form of democracy promotion as that idea.

Yet recent experiences have damaged democracy promotion’s reputation among strategic experts and the public. Given these experiences, is such a policy sustainable? Should it guide U.S. grand strategy, be adjusted, or even be replaced? Given its historical role, future administrations are more likely to revisit, and possibly reframe, the place of democracy promotion in U.S. strategy based on recent experience, rather than dismiss it entirely. How, if at all, should it shape the U.S. national security strategy and public diplomacy?

Democracy in U.S. Security Strategy: From Promotion to Support
March 11, 2009 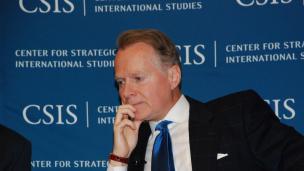 Book Discussion - The Freedom Agenda: Why America Must Spread Democracy (Just Not the Way George Bush Did) by James Traub
October 20, 2008
View all content associated with this program