The KORUS FTA Working Group is a group of policy makers, private sector leaders and thought leaders from the U.S. and Korea who are working to advance dialogue on the KORUS FTA.

Trade is a key issue in U.S. policy toward Asia, affecting relationships on a fundamental level beyond just economics.  This is especially true in the case of the U.S.-ROK alliance. The two countries signed an FTA in 2007. The agreement was ratified by the United States on October 12, 2011. The South Korean National Assembly passed the legislation ratifying the KORUS FTA on November 22, 2011 and President Lee signed the ratification bills on November 29. The goal of our working group is to foster discussion on the FTA and bridge differences where they occur.

Critical Questions: The U.S.-ROK Free Trade Agreement
On October 12, the U.S. Congress approved free trade agreements with South Korea, Colombia, and Panama. The House passed the Korea trade deal (KORUS) in a 278 to 151 vote. In the Senate, KORUS passed with 83 in favor and only 15 opposed.

Timeline of the KORUS FTA

February 21, 2012
The United States and the Republic of Korea review the measures to implement the FTA and announce that the KORUS FTA will enter into force on March 15, 2012.

October 12, 2011
The Congress of the United States approves the agreement.

February 10, 2011
The United States and the Republic of Korea exchange legal texts to confirm the agreement they concluded on December 3, 2010 and modify certain provisions of the 2007 FTA.

June 26, 2010
President Barack Obama and President Lee Myung-bak restate their commitment to the treaty and agree to eliminate remaining obstacles to the agreement by November 2010.

June 30, 2007
The United States and the Republic of Korean government sign the KORUS FTA.

June 5, 2006
The United States and the Republic of Korea begin negotiations for the U.S.-ROK Free Trade Agreement.

What is the KORUS Free Trade Agreement?
The United States-Korea Free Trade Agreement (KORUS FTA) was signed by both governments on June 30, 2007 and was entered in to force on March 15, 2012. Concerns over beef and auto trade issues as well as the powerful union lobby in the U.S. had stalled the implementation process of the agreement.

The KORUS FTA would render 95% of U.S.-ROK bilateral trade in consumer and industrial products duty-free within three years. According to the U.S. International Trade Commission’s estimates, it is estimated that $10 billion will be added to the $12 billion to U.S. GDP and approximately $10 billion to annual merchandise exports to Korea.

The Office of the United States Trade Representative asserts that the KORUS FTA “is the United States’ most commercially significant free trade agreement in almost two decades…As the first U.S. FTA with a North Asian partner, the KORUS FTA is a model for trade agreements for the rest of the region, and underscores the U.S. commitment to, and engagement in, the Asia-Pacific region.”

South Korea currently has 8 cases of free trade agreements involving 45 countries in effect, including agreements with Chile, Singapore, India, Peru, EFTA (4 countries), ASEAN (10 countries), and the EU (27 countries).  South Korea is currently discussing a number of possible FTAs including MERCOSUR and a trilateral agreement with Japan and China.

For more information, visit the Office of the United States Trade Representative.

The Accidental Linchpin
By Victor Cha
July 13, 2010
On Demand Event 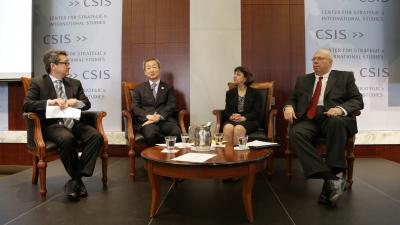 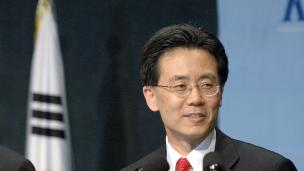 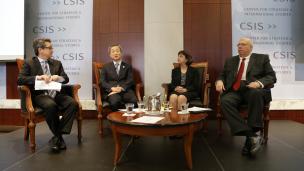 Korea's interest in the Trans-Pacific Partnership
December 12, 2013
On Demand Event

KORUS FTA and the Trade Agenda
March 22, 2011
On Demand Event

The Accidental Linchpin
By Victor Cha
July 13, 2010
On Demand Event

Corporate Outreach: Briefing on the Cheonan Incident
June 9, 2010
View all content associated with this program