Over the past few years, North Korea has resorted to cyber attacks to affect its adversaries with increasing scale and capacity. This trend is alarming given that advanced cyber warfare capabilities could increase North Korea’s asymmetrical advantage and provide alternative means of escalating a crisis. The March 20, 2013 cyber attack on major South Korean banks and broadcasting agencies served as a wake-up call for South Korean policymakers, since North Korea not only clearly demonstrated Pyongyang’s intent to utilize cyber attacks as a tool during a crisis, but also showed significant improvement in capabilities from earlier attacks that resorted to DDoS attacks on websites.

Effectively dealing with North Korea’s conventional and nuclear provocations has become one of the greatest challenges for U.S. foreign policy in the Asia-Pacific. North Korea has consistently disrupted an enduring U.S. strategic objective to promote peace and stability in the region, not only by continuing to develop and test nuclear and missile technologies but also by initiating various conventional provocations short of war that undermines security on the Korean peninsula. For U.S. and allies, it has been increasingly difficult to respond to such provocations in a way that demonstrates firm commitment and yet avoid unnecessary escalation, while finding mechanisms to effectively defend and deter increasingly varied means of provocations such as sinking of the Cheonan and shelling of Yeonpyeong Island.

The goal of this project is to assess North Korea’s organizational and functional capability to effectively conduct offensive cyber operations, assess their strategic motivations in investing in cyber capabilities, and discuss key policy implications for U.S. and South Korea. 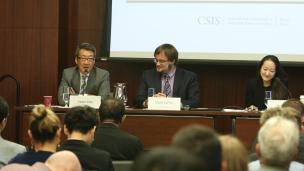 The Organization of Cyber Operations in North Korea
December 18, 2014
View all content associated with this program