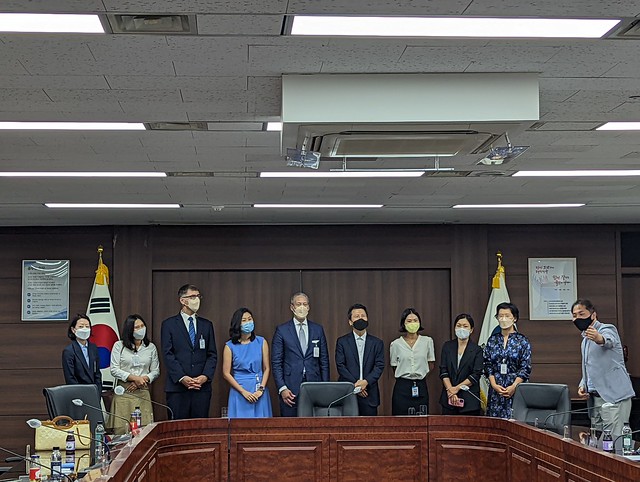 The U.S.-Korea NextGen Scholars (2020-2021) visited Seoul from July 3 to 5, 2022 for meetings with South Korean government officials, academics, journalists, experts, as well with the U.S. Embassy Seoul, Korea Foundation and alumni of the NextGen program.

As part of the U.S.-Korea NextGen Scholars program, our ten scholars will publish an op-ed as part of the program. These op-eds were workshopped at the Los Angeles Program in September 2021, with feedback provided by the program chairs and the Senior Advisory Board throughout the program.

Hazel Kwon, Disinformation is spreading beyond the realm of spycraft to become a shady industry – lessons from South Korea, November 15, 2021
In this article, Dr. Hazel Kwon discussed South Korea’s 13-year-long disinformation history demonstrates and how technology, economics and culture interact to enable the disinformation industry.

Christopher P. Hanscom is an associate professor in the Department of Asian Languages and Cultures at UCLA, and teaches courses on Korean literature and film. He is the author of The Real Modern: Literary Modernism and the Crisis of Representation in Colonial Korea (2013), a study of theories of language and modernist fiction in 1930s colonial Korea; co-editor of The Affect of Difference: Representations of Race in East Asian Empire (2016), a collection of essays offering a new perspective on the history of race and racial ideologies in modern East Asia; and co-editor of Imperatives of Culture: Selected Essays on Korean History, Literature, and Society from the Japanese Colonial Era (2013), a collection of translations of major literary critical and historical essays from the Korean colonial period.

Matthew Jenkins is an Assistant Professor of Political Science at Gyeongsang National University. He was previously a Visiting Assistant Professor of Political Science at Saint Martin’s University. His research is centered on the relationship between political culture and the use of technology for collective action. He has a regional expertise in East Asian politics, and Korean politics in particular, and his works have appeared in the Journal of East Asian Studies, the Asian Journal of Comparative Politics, the International Journal of Press/Politics, and the Journal of Information Technology and Politics.

Diana Kim is Assistant Professor in the Edmund A. Walsh School of Foreign Service at Georgetown University and a core faculty member of the Asian Studies Program. Her scholarship is animated by concerns with how modern states develop capacity to define people at the edges of respectable society, constructing what it means to be illicit, marginal, and deviant. Her research and teaching interests involve comparative and transnational politics, non-traditional security challenges, political economy, and histories of 19th and 20th century imperialism in Asia. Kim is the author of Empires of Vice: The Rise of Opium Prohibition across Southeast Asia (Princeton University Press) and currently writing a second book on “hidden” sides of Asian political economies, focusing on labor stigma and human rights violations that affect marginalized groups. She was previously a Postdoctoral Prize Fellowship in Economics, History, and Politics at Harvard University and received her Ph.D. and M.A. in Political Science from the University of Chicago and B.A. from Korea University.

Eunji Kim is an Assistant Professor of Political Science at Vanderbilt University. She studies American public opinion, political communication, and political psychology, with a focus on economic mobility, income inequality, and trade preferences. Her book project explains why many Americans believe in the prospect of upward economic mobility despite growing wealth disparities. Her research has been published in International Organization and Quarterly Journal of Political Science and featured by Harvard Business Review and Washington Post among others. She received a Joint Ph.D. in Political Science and Communication from University of Pennsylvania, an M.A. in Statistics from the Wharton School, and a B.A. in Government from Harvard University.

Ju Oak (Jade) Kim is an Assistant Professor of Communication at Texas A&M International University. She specializes in global media industries, production studies, and East Asian media culture and practice. Her scholarly work appears in the Journal of Popular Culture, International Journal of Communication, and Culture, Theory, and Critique. Kim is currently working on her book manuscript that explores the production culture of Korean television and pop industries at the heart of the Korean Wave phenomenon. Prior to Academia, Kim served as the writer of the award-winning KBS documentary series, china (Grand Prize from Korean Broadcasting Commission and Best Picture Prize in Journalism at Korean Broadcasting Awards), the adapter of Korean film A Letter from Mars, a content producer at Samsung Economic Research Institute, and a media consultant for the Korea Society. She is the winner of Chosun Ilbo’s Annual Spring Literary Contest for Springtime and has had six short stories published in Korean literary journals and newspapers. Kim holds her Ph.D. in Mass Media and Communication from Temple University, M.F.A. in Television Production from Brooklyn College, and M.A. in Communication and B.A.s in Korean Language Education and Communication from Seoul National University.

Lami Kim is an assistant professor of Asian Studies at the U.S. Army War College and a fellow at the Wilson Center.  Her research interests are nuclear nonproliferation, nuclear energy, and security issues in East Asia. Her work has appeared in The Washington Quarterly, Bulletin of the Atomic Scientists, Routledge, Belfer Center for Science and International Affairs, The Diplomat, etc.  She also provided commentaries to Time magazine, Al-Jazeera and LA Times. Previously, she has served as a research fellow at Harvard's Belfer Center, Pacific Forum, and Stimson Center, a visiting scholar at Seoul National University, and also as a South Korean diplomat.  She has taught at Harvard, Boston College, and the University of Hong Kong.  She holds a PhD degree from the Fletcher School of Law and Diplomacy at Tufts University and a Master’s degree from Harvard University.

K. Hazel Kwon is an associate professor of journalism at Walter Cronkite School of Journalism and Mass Communication at Arizona State University. Her research centers on digital media and society, with an emphasis on the dynamics in which networked environment influences public discourses, collective sensemaking, and misinformation in the context of politics and national security. Her recent projects include cyber-rumoring and public opinion manipulation in East Asian digital spaces. She is a prolific researcher with 45+ refereed publications, 50+ presentation/talks/guest speeches, and several grant awards from the U.S. Department of Defense (PI), Social Science Research Council’s Social Media and Democracy Research Grants (PI), National Science Foundation (PI), and MacArthur Foundation’s Digital Media Learning Competition (Co-PI).  She received a PhD and MA in Communication from State University of New York at Buffalo, and BA with honors in Journalism from Yonsei University in South Korea.

Kacie Miura is an assistant professor of Political Science and International Relations at the University of San Diego. Her research focuses on economic statecraft, nationalism, and the link between domestic and international politics. Her current book project explores when, why, and how local officials in China carry out economic retaliation against important foreign economic partners, including South Korea, Japan, and the United States. She received her PhD in Political Science at the Massachusetts Institute of Technology, where she was a member of the Security Studies Program. Kacie was previously a research fellow at the Harvard Kennedy School’s Belfer Center for Science and International Affairs. She also served as a Peace Corps volunteer in Fuling, China. She received her MA from Yale University and her BA from the University of Hawaii at Manoa.

Audrye Wong is a Grand Strategy, Security, and Statecraft Postdoctoral Fellow at the Harvard Kennedy School and MIT’s Security Studies Program. She has also been affiliated with Harvard’s Fairbank Center, the Brookings Institution, and the Carnegie Endowment for International Peace. From fall 2021, Audrye will be an assistant professor of political science and international relations at the University of Southern California. She received a PhD in Security Studies from Princeton University’s Woodrow Wilson School of Public and International Affairs, where she was a National Science Foundation Graduate Research Fellow. Audrye’s research examines how states use non-military tools in pursuit of geopolitical influence, with an additional substantive focus on China’s foreign policy and Asia-Pacific security issues. Her current book project examines the strategies and effectiveness of economic statecraft.

Dafna Zur is an Associate Professor in the Department of East Asian Languages and Cultures at Stanford University where she teaches courses on Korean literature, cinema, and popular culture. Her book, Figuring Korean Futures: Children’s Literature in Modern Korea (Stanford University Press, 2017), traces the affective investments and coded aspirations made possible by children’s literature in colonial and postcolonial Korea. She is working on a new project on moral education in science and literary youth magazines in postwar North and South Korea. She has published articles on North Korean science fiction, the Korean War in North and South Korean children’s literature, childhood in cinema, and Korean popular culture. Her translations of Korean fiction have appeared in wordwithoutborders.org, The Columbia Anthology of Modern Korean Short Stories, and the Asia Literary Review.