Exploring the Black Box of North Korea in a Globalized Context

The Laboratory’s research activities will contribute to the broader development of Korean studies, particularly in the disciplines of history and political science. The Laboratory’s multidisciplinary research and methodology involve the fields of social history; diplomatic history; strategy and national security studies; data collection and analysis; postmodern concepts of statehood and methods of state control; evolving concepts of citizenship and identity; domestic politics; and the impact of markets, transnational networks, and new sources of information on society. These areas of study constitute new approaches to addressing the issue of North Korea and will lead to a growing body of scholarly literature that looks at the country not as a static whole but as a highly complicated and interrelated set of challenges that pose problems for regional stakeholders in a globalized world.

The Laboratory’s findings will have implications for key scholarly debates and will constitute a leading wave of new research between senior scholars and “rising stars” that collectively moves beyond one-dimensional assessments of North Korea as an opaque unitary actor. The $1.25 million Laboratory will produce 5 scholarly books and 15 refereed journal articles, generating a new wave of theoretically rigorous, empirically nuanced, and objective research that will advance our understanding of a country whose fate will engage the core interests of South Korea and other major players in the region.

This multiyear research project (2016 – 2021) was made possible by CSIS and the support of the Korean Studies Promotion Service (KSPS) of the Academy of Korean Studies (AKS).

Dr. Victor D. Cha joined the Center for Strategic and International Studies in Washington, D.C., in May 2009 as a senior adviser and the inaugural holder of the Korea Chair. He also holds the D.S. Song-KF Professorship in Government and International Affairs at Georgetown University. From 2004 to 2007, he served as director for Asian affairs at the White House on the National Security Council (NSC), where he was responsible primarily for Japan, the Korean peninsula, Australia, New Zealand, and Pacific Island nation affairs. Dr. Cha was also the deputy head of delegation for the United States at the Six-Party Talks in Beijing and received two Outstanding Service Commendations during his tenure at the NSC. He is the award-winning author of Alignment Despite Antagonism: The United States-Korea-Japan Security Triangle (Stanford University Press, 1999); Nuclear North Korea: A Debate on Engagement Strategies, with Dave Kang (Columbia University Press, 2004); Beyond the Final Score: The Politics of Sport in Asia (Columbia University Press, 2009); The Impossible State: North Korea, Past and Future (Ecco, 2012); and Powerplay: Origins of the American Alliance System in Asia (Princeton University Press, 2016). Dr. Cha holds a B.A., an M.I.A., and a Ph.D. from Columbia University, as well as an M.A. from Oxford University.

Associate Professor, Lyndon B. Johnson School of Public Affairs, The University of Texas at Austin

Sheena Chestnut Greitens is an associate professor at the LBJ School, as well as a faculty fellow with the Clements Center for National Security and a distinguished scholar with the Strauss Center for International Security and Law. She is also a nonresident senior fellow at the Brookings Institution, an adjunct fellow with the Korea Chair at the Center for Strategic and International Studies, an associate in research at the Fairbank Center for Chinese Studies at Harvard University, and a member of the Digital Freedom Forum at the Center for a New American Security. Dr. Greitens holds a Ph.D. from Harvard University, an M.Phil. from Oxford University, where she studied as a Marshall scholar, and a B.A. from Stanford University. Her research focuses on East Asia, American national security and authoritarian politics and foreign policy.

Professor of Politics and Director of Asian Studies, The Catholic University of America

Andrew Yeo is a Professor of Politics and Director of Asian Studies at The Catholic University of America in Washington, D.C. His research and teaching interests include international relations theory, Asian security, narratives and discourse, the formation of beliefs, ideas, and worldviews, civil society, social and transnational movements, U.S. grand strategy and global force posture, Korean politics, and North Korea. Dr. Yeo’s scholarly publications have appeared in International Studies Quarterly, European Journal of International Relations, Perspectives on Politics, Comparative Politics, Journal of East Asian Studies, and International Relations of the Asia-Pacific among others. He received his Ph.D. in Government from Cornell University, and BA in Psychology and International Studies magna cum laude, from Northwestern University.

Dr. Katharine H.S. Moon is a professor of political science and the Wasserman Chair of Asian Studies at Wellesley College, where she has taught since 1993. She is also a nonresident senior fellow at the Brookings Institution Center for East Asia Policy and was the inaugural holder of the SK-Korea Foundation Chair in Korea Studies. Dr. Moon also served in the Office of the Senior Coordinator for International Women’s Issues in the U.S. Department of State and as a trustee of Smith College. She is a member of the Harvard Kennedy School Korea Working Group, the Steering Committee of the National Committee on North Korea, and is an affiliated faculty at the Korea Institute, Harvard University. Dr. Moon’s research encompasses the U.S.-Korea alliance, East Asian politics, inter-Korean relations, democratization, nationalisms, women and gender politics, international migration, identity politics, and comparative social movements in East Asia. She is the author of Protesting America: Democracy and the U.S.-Korea Alliance (University of California Press, 2013) and Sex Among Allies: Military Prostitution in U.S.-Korea Relations (Columbia University Press, 1997). Dr. Moon received a B.A., magna cum laude, from Smith College and a doctorate from Princeton University.

Dr. Sheen, Seong-Ho is a professor of international security and East Asia at the Graduate School of International Studies, Seoul National University. He also works as director of the International Security Strategy Program. Professor Sheen was a visiting fellow at the East-West Center in Washington, D.C., a CNAPS fellow at the Brookings Institution in Washington, D.C., an assistant research professor at the Asia-Pacific Center for Security Studies in Honolulu, Hawaii, and a research fellow at the Institute for Foreign Policy Analysis in Cambridge, Massachusetts. He has taught at University of Massachusetts in Boston. In addition, he has advised various government organizations, including the Republic of Korea Ministry of National Defense, Ministry of Foreign Affairs, Ministry of Unification and Committee on Foreign Affairs and Unification, and the Republic of Korea National Assembly. His areas of interest include international security, U.S. foreign policy, Northeast Asian geopolitics and the Korean peninsula. Professor Sheen received his Ph.D. and M.A. from the Fletcher School of Law and Diplomacy, Tufts University, and his B.A. from Seoul National University.

Dr. Van Jackson joined Victoria University of Wellington in 2017 as a senior lecturer in international relations. He is also the defense and strategy fellow with the Centre for Strategic Studies. Dr. Jackson’s research broadly concerns the intersection of U.S. strategy and the Asia Pacific. He is the author of numerous journal articles, book chapters, and policy reports, as well as Rival Reputations: Coercion and Credibility in U.S.-North Korea Relations (Cambridge University Press, 2016). Prior to joining Victoria, he taught courses on Asian security, U.S. foreign policy, and Korea and Japan at Georgetown University, Hawaii Pacific University, the Catholic University of America, and the Asia-Pacific Center for Security Studies. His research has been funded by the Smith Richardson Foundation, the Academy of Korean Studies, and the Council on Foreign Relations, and he has held policy research appointments with the Center for a New American Security, the Council on Foreign Relations, and Pacific Forum CSIS. Before becoming a scholar, he was a practitioner of foreign and defense policy, serving in several positions in the Office of the U.S. Secretary of Defense from 2009 to 2014, as well as the U.S. Air Force, from 2000 to 2006.

Dr. Michael J. Green is senior vice president for Asia and Japan Chair at the Center for Strategic and International Studies (CSIS) and director of Asian studies at the Edmund A. Walsh School of Foreign Service at Georgetown University. He served on the staff of the National Security Council (NSC) from 2001 through 2005, first as director for Asian affairs with responsibility for Japan, Korea, Australia, and New Zealand, and then as special assistant to the president for national security affairs and senior director for Asia, with responsibility for East Asia and South Asia. Before joining the NSC staff, he was a senior fellow for East Asian security at the Council on Foreign Relations, director of the Edwin O. Reischauer Center and the Foreign Policy Institute and assistant professor at the School of Advanced International Studies (SAIS) at Johns Hopkins University, research staff member at the Institute for Defense Analyses, and senior adviser on Asia in the Office of the Secretary of Defense. He also worked in Japan on the staff of a member of the National Diet. Dr. Green is also a nonresident fellow at the Lowy Institute in Sydney, Australia, a distinguished scholar at the Asia Pacific Institute in Tokyo, and professor by special appointment at Sophia University in Tokyo. He is a member of the Council on Foreign Relations, the Aspen Strategy Group, the America Australia Leadership Dialogue, the advisory boards of Radio Free Asia and the Center for a New American Security, and the editorial boards of the Washington Quarterly and the Journal of Unification Studies. He also serves as a trustee at the Asia Foundation, senior adviser at the Asia Group, and associate of the U.S. Intelligence Community. He received his master’s and doctoral degrees from SAIS and did additional graduate and postgraduate research at Tokyo University and the Massachusetts Institute of Technology. He received his bachelor’s degree in history from Kenyon College with highest honors.

John Delury is Professor of Chinese Studies at Yonsei University Graduate School of International Studies (GSIS), where he serves as chair of the Program in International Cooperation. He is also chair of the undergraduate Program in International Studies at Yonsei’s Underwood International College (UIC), and founding director of the Yonsei Center on Oceania Studies. He is the author, with Orville Schell, of Wealth and Power: China's Long March to the Twenty-first Century, and is writing a book about US-China relations in the early Cold War. Based in Seoul since 2010, his articles can be found in journals such as Asian Survey, Late Imperial China, and Journal of Asian Studies, his commentaries appear in Foreign Affairs, Foreign Policy, The New York Times, Washington Post, and 38 North, and he contributes book reviews for the quarterly journal Global Asia, where he is associate managing editor. John is a member of the Council of Foreign Relations, National Committee on US-China Relations, and National Committee on North Korea; he is also Pacific Century Institute board member, Asia Society senior fellow, National Committee on American Foreign Policy leadership council member, and Center on Strategic and International Studies adjunct fellow. He is a member of the Republic of Ireland’s foreign affairs advisory network and is invited to offer his analysis on East Asian affairs with government, think tank, corporate, and civil society organizations globally. 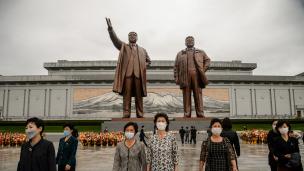 Exploring the Black Box of North Korea in a Globalized Context
November 29, 2021
Newsletter 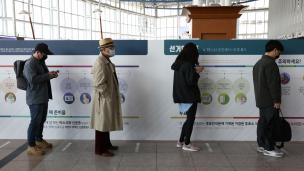 How Democracy Won the World’s First Coronavirus Election
By John Delury
April 16, 2020
View all content associated with this program