Violent Extremism in the Sahel

Violent extremist organizations have expanded their ambitions, capacities, and geographical reach into the Sahel and West Africa, extending an Arc of Instability across an area of strategic interest for the United States and its allies. Boko Haram, al Qaeda in the Islamic Maghreb (AQIM), and other terror groups present a continuing threat to the stability of the region. As they come under increasing pressure from French and regional security forces, their future evolution is uncertain, but they have proven their ability to adapt and rebound in the face of previous setbacks. To enhance policymakers’ understanding of these threats and how best to respond to them, CSIS experts from the Africa Program and Transnational Threats Project conducted field-based and scholarly research examining the evolution of extremist organizations in the Sahel, the political and structural drivers of extremist groups in the region, the economic landscape in which they operate, and efforts by regional governments and their international partners to defeat them.

Below you will find a video overview of the Sahel militancy project, research findings, photographs from the field, a podcast interview with the principal investigators, supplemental material in the form of articles, op-eds, and Congressional testimony, and a link to a public conference held on September 27, 2016.

Violent extremist organizations profoundly impact the Sahel and West Africa. Since the early 2000s, their expanding ambitions, capacities, and geographical reach have wrought devastation on human security and economic development. Attacks by al Qaeda in the Islamic Maghreb (AQIM) and Boko Haram have killed tens of thousands of people and displaced millions more within and across national borders. The region remains greatly threatened by violence and instability.

Together, Boko Haram and AQIM have taken a terrible toll on communities that were already fragile and economically marginalized. Terror activity has disrupted health and education services and devastated local economies. Extremist groups seized control of strategic towns in Nigeria and Mali and turned significant swaths of territory into no-go zones for regional governments and security forces. In the case of Mali, violent extremists helped precipitate state collapse.

In the last three years, both Boko Haram and AQIM have come under increasing pressure, a result of regional and international military interventions and a UN peacekeeping deployment into northern Mali; French forces in particular play a critical role across the region. Both extremist groups have suffered significant losses in men and matériel, and they no longer control or administer territory in their respective areas.

However, there is a very long way to go before the appeal and the threat of violent extremism in the West African Sahel is suppressed. Violent extremist groups, particularly in Mali and the upper Sahel, are just some of the many armed and militant groups competing and collaborating in pursuit of personal, ethnic, social, regional, and economic interests. Extremist groups blend with a broader infrastructure of competition, conflict, and insecurity and cannot be understood—or addressed—in isolation from it.

The presence in Libya of Islamic State and al Qaeda compounds these risks, and competition between these two groups, along with arms and battle-hardened fighters, may spill over into the region. Deepening ties with global terror networks and increasing competition for worldwide notoriety may set off a dangerous cycle of one-upmanship that plays out in spectacular operations in capitals across the West African region. The attacks on the Radisson Blu hotel in Bamako, the Splendid Hotel in in Ouagadougou, and a beachfront resort in Côte d’Ivoire are grim harbingers of a more violent future.

Governments of the region counter these extremist threats predominantly through military force, without committing to tackling the drivers of militancy or changing how they connect with their citizens in marginalized communities. External partners should avoid reinforcing a singular emphasis on military solutions that only enables national governments to sidestep the difficult path of accountability and reform. At the same time, military services need more training, appropriate equipment, and professionalization for occasions requiring force.

This report, a collaboration between the CSIS Transnational Threats Project and the CSIS Africa Program, examines the drivers and dynamics of violent extremist groups in the Sahel, their sources of resilience, and the broader political economy context in which they operate. Analysis comes from interviews in Senegal, Nigeria, Niger, and Mali, including areas most affected by extremist violence. The bulk of the interviews were conducted off-the record, but the CSIS team is grateful to the many people who shared their insights and perspectives—military and intelligence officers; UN and African Union representatives; journalists, activists, and development experts; academics; members of vigilante groups, civilians who have been displaced by fighting, and residents of affected areas.

Violent extremist groups continue to threaten communities across the Sahel. Their capacity for resilience and the lack of remedies for the conditions enabling their survival requires sustained attention from both regional governments and external partners. 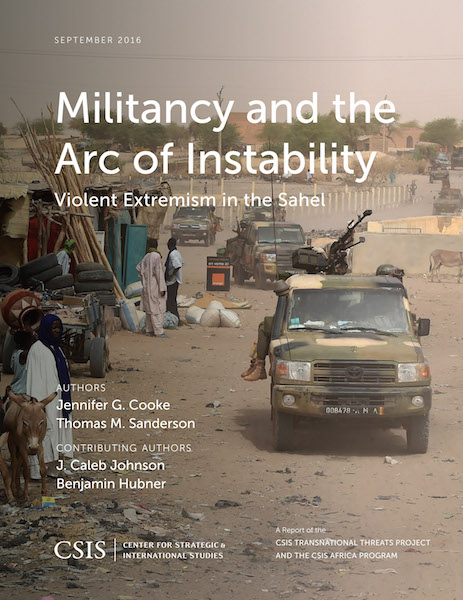 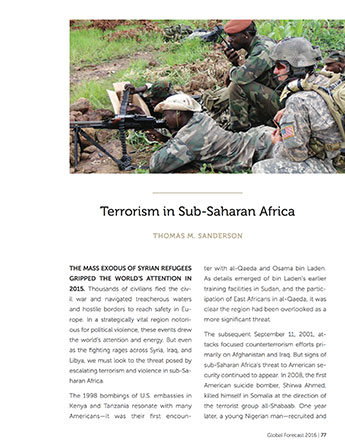 Appearing in the 2016 CSIS Global Forecast, the article “Terrorism in Sub-Saharan Africa” alerts us to the vulnerabilities and threats found across the Sahel, while also highlighting the developments in Syria, Iraq, and Libya that could badly impact the region. Weaknesses such as poor governance, corruption, trafficking, border control, and marginalization leave fragile Sahelian states open to greater violence and instability. 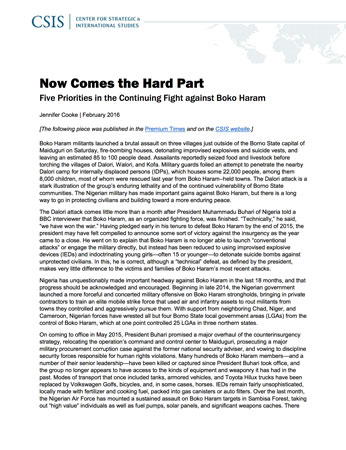 Published in Nigeria’s Premium Times, the commentary piece by CSIS Africa Program Director Jennifer Cooke “Now Comes the Hard Part: Five Priorities in the Continuing Fight against Boko Haram” argues that for sustained security over the long term, Nigeria will need to plan and implement a comprehensive strategy that prioritizes civilian protection and improves socioeconomic conditions for impoverished communities across the North East. 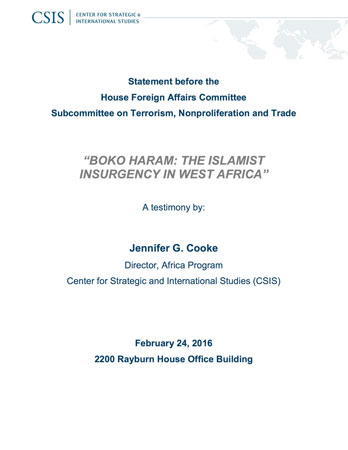 In February 2016, CSIS Africa Program Director Jennifer Cooke testified in front of the House Foreign Affairs Subcommittee on Terrorism, Nonproliferation, and Trade at a hearing on “Boko Haram: The Islamist Insurgency in West Africa.” Her testimony emphasizes the need for greater regional security cooperation and improved civilian protection and calls for vigilance regarding the prospect of insurgent groups in the Sahel turning the region into a proxy battleground for ideological and geopolitical rivalries. 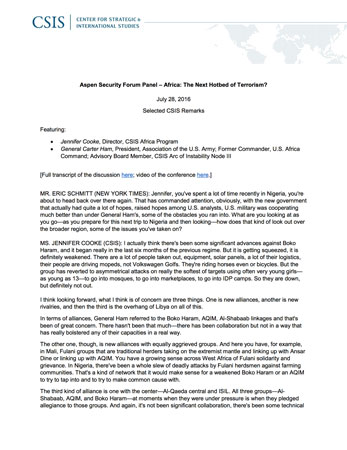 Read a partial transcript of the Aspen Security Forum panel from July 2016 titled “Africa: The Next Hotbed of Terrorism?” featuring remarks from CSIS Africa Program Director Jennifer Cooke and project adviser and former AFRICOM Commander General Carter Ham. Topics of discussion include: Boko Haram in Nigeria; AQIM in Mali; piracy in West Africa and the Horn; and the role of Libyan state collapse in regional instability and the strength of ISIL on the continent.

This brief public service announcement (PSA) from the Nigerian Ministry of Information and Culture warns citizens to ongoing dangers posed by Boko Haram, calling on Nigerians to be vigilant and to report suspicious activity. Issued in 2015, it claims important progress by the Nigerian military against Boko Haram. Posting of the PSA is for information purposes only and does not imply CSIS endorsement of its contents. 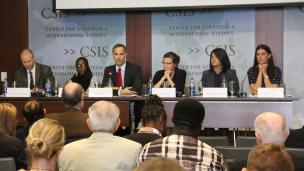 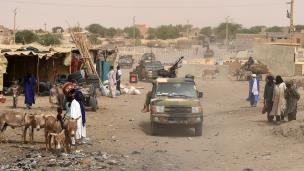 Militancy and the Arc of Instability
By Jennifer G. Cooke
September 27, 2016
View all content associated with this program