Skip to main content
Photo: Bruce Tuten via CC BY 2.0

This is a major review of the U.S.-New Zealand bilateral relationship that made recommendations to elevate the relationship from its strong foundation.

It also examined the impact of regional architecture on these key areas and made recommendations to further elevate the relationship from its already strong foundations.

The study was funded by the U.S.-New Zealand Council in Washington, D.C. and the New Zealand-U.S. Council in Auckland.  Its findings were used as the intellectual and research-based foundation of the U.S.-NZ Partnership Forum, the premier bilateral event linking U.S. and New Zealand leaders to set a vision for future cooperation between the two nations.  The most recent U.S.-NZ Partnership Forum was held in Christchurch, New Zealand, from February 20-22, 2011, where the study was presented and discussed in the opening session.

The Initiative was launched in Washington, D.C. at an event at CSIS featuring U.S. Assistant Secretary of State for East Asia and the Pacific, Kurt Campbell, and New Zealand’s Ambassador to the United States, Mike Moore.  Moore is a former Prime Minister of New Zealand and was also Director-General of the World Trade Organization (WTO).

Assistant Secretary Campbell said, “It is the right time for this study.  The U.S.-New Zealand relationship is important on many levels ranging from a common vision on the empowering impact of trade to the fundamental value of a safe and secure Asia-Pacific region.  CSIS has a reputation for doing solid research and putting focused findings in the hands of policy makers.  I am looking forward to these recommendations for taking a solid relationship to new levels.”

Ambassador Moore added, “This is an important study. It will be honest, robust, and will underpin and identify those areas we need to focus on and build on.  This can be a roadmap that makes a good relationship even better.”

The Pacific Partners study was directed by a high level Board of Advisors comprised of leaders from both the United States and New Zealand, including:

The study was published in February 2011 in conjunction with the Partnership Forum. 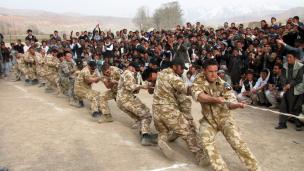