Over the last 15 years, there has been a growing global recognition on the pivotal role that private investment can play in achieving the Sustainable Development Goals (SDGs) and building markets in emerging economies. While appetite for investing in emerging markets might be rising, aid from developed country governments is waning. Foreign assistance—also known as Official Development Assistance (ODA), that is, funding provided by governments to developing countries—will not (and should not) close the $2.5 trillion annual investment gap necessary for reaching the SDGs. Many groups reference the transformative power and scale of the private sector as the answer for filling global development investment gaps, but questions from these private institutions around risk and other issues remain. In this regard, Development Finance Institutions (DFIs) can be instrumental in steering private capital into developing countries.

DFIs are government-backed institutions that invest in private-sector projects in low- and middle- income countries. They are structured as either multilateral or bilateral organizations seeking to invest in commercially sustainable projects, often in concert with private investors. Every year, CSIS tracks the commitments made by the 30 biggest DFIs to chart the growth of this source of development funding (see Annex 1 for a listing of the DFIs considered).1 This policy report updates the findings from our last update: DFIs Drive the Development Agenda to Center Stage.

Since 2016, CSIS has compared annual growth of the global DFI community to ODA. What has become clear is that while ODA is still the dominant form of development funding at $146 billion, DFIs have become a central part of the global architecture for achieving the SDGs (Figure 1). For 2017, CSIS research shows the global DFI system has reached a plateau: DFIs committed $87 billion in non- sovereign, private sector development financing. While this number is up from around $86 billion in 2016, it is still below the over $90 billion in record commitments from 2012 and 2014. However, we believe this plateauing of investment will reverse soon due to a series of steps taken by DFIs and their shareholders and trends taking place in emerging markets.

Since 2000, DFIs have grown from almost $12 billion in annual investments to $87 billion in 2017—an increase of six times. Over the same time span, ODA has almost tripled from approximately $54 billion to $146 billion. DFI growth has slowed since the global recession just as needs in emerging markets have peaked. After the 2009 global recession, while privately funded development dipped by almost 6 percent, public official development assistance (ODA) rose by around 7 percent.

DFIs utilize similar financial instruments to other large private institutions in their investment strategies, usually relying on equity, quasi-equity, guarantees, insurance, risk management, loans, or other special vehicles like cooperation funds. Regionally, there is healthy investment diversification across the globe. However, one common issue remains: the countries with the lowest per capita income receive small investment attention, primarily due to lagging existing financial infrastructure, investable deals, and perceived risk. That trend begs the question if the private sector has a role in developing extreme frontier markets, or if their tools should be reserved for countries demonstrating progress? The paradox is that private sector investment is seen as most transformative in fragile contexts but is usually not applied to countries needing the biggest transformations. In terms of sectors, DFIs focus mostly on investing in financial markets, infrastructure, insurance, or trade finance. These industries demonstrate the lowest risk, highest return, and least necessity for an existing market base in a country.

The International Finance Corporation (IFC) is the World Bank’s DFI. As one of the largest DFIs in the world, IFC accounted for almost 14 percent of the global DFI commitments in 2017. IFC committed over $18 billion in non-sovereign, private financing tools in 2013. Since then, IFC commitments have dropped by 35 percent in 2017, to reach $12 billion.

Annual commitments for 2017 primarily leveraged loan products, followed by equity and quasi-equity, with limited focus given to guarantees, then risk management. Guarantees took a massive hit, dropping from almost $7 billion in the IFC annual portfolio in 2013 to $540 million in 2017. Equity and risk management also dropped, while loans moderately improved by about $1 billion.
In 2017, IFC’s geographic focus favored Latin American and the Caribbean followed by sub-Saharan Africa, Europe and Central Asia, South Asia, and East Asia in order of commitment level. Smaller amounts were invested in the Middle East and North Africa. IFC invested more in only one region in 2017 than 2013— South Asia. All other regions received fewer commitments in 2017 than in 2013.

Charting the Future of DFIs

Charting the trendline of DFI growth from 2000 until now, DFIs should have surpassed $100 billion in annual investment for the first time between 2015 and 2016. However, they only invested around $82 billion globally that year. Some of the reasons for limited DFI growth include:

The combination of these phenomena—either being necessary regulations meant to protect both investors and investees, budget decisions from governments, or strategy of investors—have resulted in lagging interest from initially very aggressive DFIs. The resulting situation is that appetite from emerging markets is at an all-time high for investment, while interest is waning from developed governments. The private sector can fill that gap, but first, their current concerns around risk and “investability” must be assuaged. While investment in developing countries is needed, there may be a vacuum of deals, no marketplace for linking capital with deals, lagging leadership for innovative projects, or structural impediments to growth.

However, we believe that in the next five years, DFIs commitments will pick up thanks to initiatives from some of the world’s biggest DFIs (Figure 2). The current process of recapitalization taking place in several DFIs along with the U.S. creation of the International Development Finance Corporation (USFC) and investors’ appetite to rebalance their portfolios towards emerging markets are signs that this “plateau” in DFI’s investments will reverse.

The first reason for this reversal is that many DFIs are undergoing a recapitalization process, which will allow them to expand their operations in developing countries. In 2018, IFC shareholders approved a $5.5 billion capital increase, bringing the total paid-capital to triple its original levels. Beyond IFC, the United Kingdom is also scaling its DFI activities through the CDC Group. In 2016, the UK introduced legislation to increase CDC’s funding cap from 1.5 billion pounds to 6 billion pounds, with further measures to allow an increase to 12 billion pounds. The new U.S. International Development Finance Corporation (USDFC) reportedly will have a $60 billion portfolio cap, almost triple Overseas Private Investment Corporation’s (OPIC) current portfolio. In 2018, Canada created its own DFI, FindevCanada, and has just made its first investment. The European Union is also planning on scaling up its development finance tools through blended finance and guarantees, by expanding the 2017 External Investment Plan (EIP). These capitalization increases help DFIs commit to diversifying their portfolios across geographies, instruments, risk landscapes, and industries. As most of these institutions make money for their governments, these increases could spell further profit and self-sustainability.

Secondly, in 2018, the United States passed what could be its most revolutionary soft power-focused legislation in decades. This legislation, the Better Utilization of Investments Leading to Development Act of 2018 or the BUILD Act of 2018, scales up the United States’ current DFI—OPIC—to become the USDFC. It provides a significant boost to U.S.-backed financing for global development since it expands OPICs lending capacity from 30 billion to 60 billion, with an aim to crowd in more private sector investment. OPIC did $4 billion worth of deals in 2018 and three years from now, and we expect that the new USDFC will be able to do $8 billion. The legislation also equips the USDFC with more and better investment tools (such as the capacity to lend in local currency, provide first loss guarantees and make equity investment) to surmount impediments which have been limiting growth and impact. For years, the inability to reinvest earnings or go beyond its debt ceiling has hindered OPIC. The new U.S. DFI addresses those problems, scales financial sustainability with development impact, and challenges the role of China as a new development investor. With this massive undertaking, however, there are still many questions around the kind of tools the USDFC will deploy and the type of sectors and regions to target.

Thirdly, impact investing has been growing in importance in recent years. These funds and foundations seek a social or environmental impact as well as a financial return that align to enterprise funds dual mandate or “return” and “development.” In 2017 alone, impact funds invested $35 billion in diverse sectors such as microfinance, energy, health, and agriculture are forecasted to grow 8 percent in 2018. Emerging markets can become more mainstream targets for investment (rather than being corporate social responsibility, as they are now) as banks, pension funds, and other institutions continue to think about future regional, instrumental, and industrial diversification strategies. If and when other institutional investors commit to impact investing as a strategic goal, then DFIs could become the primary advisor and guide for navigating emerging markets. With increasing market saturation in developed economies, aging, and maturing appetites in emerging markets, it is only a matter of time until DFIs receive a more prominent focus.

DFIs have grown drastically over the past 30 years and—regarding new initiatives like the BUILD Act and the USDFC—have a bright future. DFIs will continue to become more important for global development as publicly funded ODA wanes and emerging markets appetite for capital increases. In general, DFIs are increasingly being asked to go to tougher places, to countries struggling with fragility. And as interest in growing ODA wanes, DFIs will need to expand their toolboxes to compliment traditional sources of development finance. Governments need to recommit to DFIs now to anticipate those needs in the future.

DFIs’ growth over the last few decades suggested their commitment levels would surpass ODA sooner rather than later. DFIs have not yet surpassed traditional ODA. A combination of external economic and regulatory factors, however, have driven DFI potential downward. DFIs will still surpass ODA, but in a 10- year time horizon. Given current attention on the role of private in global development, DFI commitments will play a growing role in the years to come. 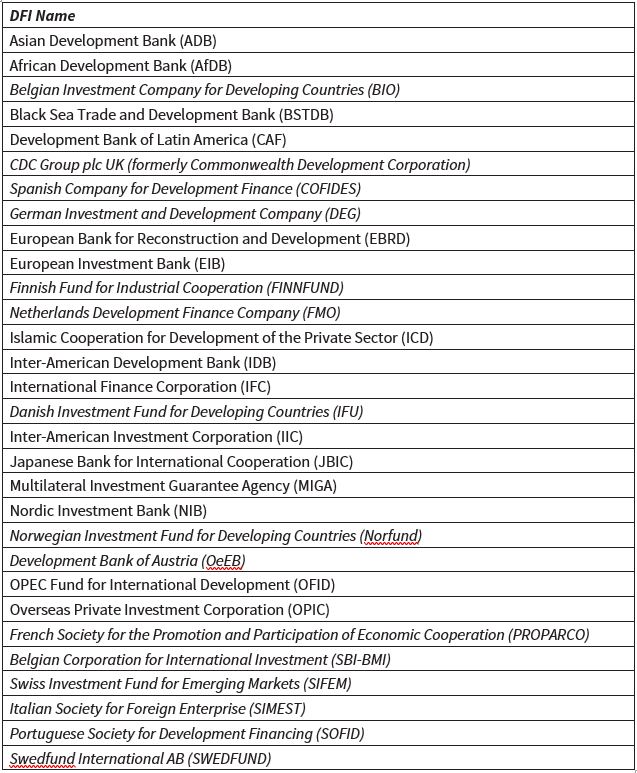