Building China’s “One Belt, One Road”

On March 28, China’s top economic planning agency, the National Development and Reform Commission (NDRC), released a new action plan outlining key details of Beijing’s “One Belt, One Road” initiative. Chinese president Xi Jinping has made the program a centerpiece of both his foreign policy and domestic economic strategy. Initially billed as a network of regional infrastructure projects, this latest release indicates that the scope of the “Belt and Road” initiative has continued to expand and will now include promotion of enhanced policy coordination across the Asian continent, financial integration, trade liberalization, and people-to-people connectivity. China’s efforts to implement this initiative will likely have an important effect on the region’s economic architecture—patterns of regional trade, investment, infrastructure development—and in turn have strategic implications for China, the United States, and other major powers.

A1: The “Silk Road Economic Belt” and “21st Century Maritime Silk Road” are initiatives first introduced by Xi in the fall of 2013 during visits to Kazakhstan and Indonesia, respectively. They are expected to feature prominently in China’s 13th Five-Year Plan, which will run from 2016 to 2020 and guide national investment strategy throughout that period.

Often referred to jointly as the “One Belt, One Road,” details released so far by China’s official media outlets show the “Belt” as a planned network of overland road and rail routes, oil and natural gas pipelines, and other infrastructure projects that will stretch from Xi’an in central China, through Central Asia, and ultimately reach as far as Moscow, Rotterdam, and Venice. Perhaps awkwardly named, the “Road” is its maritime equivalent: a network of planned port and other coastal infrastructure projects that dot the map from South and Southeast Asia to East Africa and the northern Mediterranean Sea.

The new Belt and Road plan, jointly released by the NDRC and the Ministries of Foreign Affairs and Commerce, highlights that the scope of the initiative will extend well beyond infrastructure construction. The program will also include efforts to promote greater financial integration and use of the Renminbi by foreign countries, create an “Information Silk Road” linking regional information and communications technology networks, and lower barriers to cross-border trade and investment in the region, among other initiatives. New regional institutions, such as the Asian Infrastructure Investment Bank (AIIB) and New Silk Road Fund (NSRF), are also designed in part to complement and support the Belt and Road’s development.

The plan is also notable for its mixing of traditional Chinese diplomatic language (e.g., emphasizing sovereignty and nonintervention) alongside a newer rhetorical focus on adherence to high standards and international norms and the “decisive” role of the market and industry in driving the initiative. This echoes the pledge made by China’s leadership at the November 2013 Third Plenum to “give the market a decisive role in resource allocation,” but it remains to be seen whether or not market forces and commercial considerations will in fact play a critical role in driving the new Silk Road forward.

Q2: What is Beijing trying to achieve with this initiative?

A2: There are important economic and geopolitical drivers of the initiative, though Beijing is likely more focused on the former at present given its domestic economic challenges.

Specifically, the Chinese leadership is struggling to manage a difficult transition to a “new normal” of slower and more sustainable economic growth. The infrastructure projects proposed as part of the Belt and Road—many of which would run through some of China’s poorest and least developed regions—could provide stimulus to help cushion the effects of this deepening slowdown. Beijing is also hoping that, by improving connectivity between its underdeveloped southern and western provinces, its richer coast, and the countries along its periphery, the Belt and Road will improve China’s internal economic integration and competitiveness and spur more regionally balanced growth. Moreover, the construction is intended to help make use of China’s enormous industrial overcapacity and ease the entry of Chinese goods into regional markets. At a time when many large state-owned enterprises are struggling to stay afloat and banks are stuck in a cycle of rolling over ever-growing and progressively less viable loan portfolios, the projects that make up the Belt and Road could provide vital life support and serve as a useful patronage tool for compensating vested interests threatened by efforts to implement market-oriented reforms.

On the foreign policy front, the Belt and Road reflects many of the priorities Xi Jinping identified at a major Chinese Communist Party gathering on foreign affairs held last November. These included a heightened focus on improving diplomacy with neighboring states and more strategic use of economics as part of China’s overall diplomatic toolkit. Against the backdrop of a regional “infrastructure gap” estimated in the trillions of dollars, the initiative highlights China’s enormous and growing resources and will provide a major financial carrot to incentivize governments in Asia to pursue greater cooperation with Beijing. Over the medium to long term, successful implementation of the initiative could help deepen regional economic integration, boost cross-border trade and financial flows between Eurasian countries and the outside world, and further entrench Sino-centric patterns of trade, investment, and infrastructure. This would strengthen China’s importance as an economic partner for its neighbors and, potentially, enhance Beijing’s diplomatic leverage in the region. Increased investment in energy and mineral resources, particularly in Central Asia, could also help reduce China’s reliance on commodities imported from overseas, including oil transiting the Strait of Malacca.

Q3: Does this initiative involve a free trade area or the creation of another kind of international institution?

A3: No, this is clearly not a regional free trade area, and it involves no binding state-to-state agreements. Instead, it is at its heart a pledge by China to use its economic resources and diplomatic skill to promote infrastructure investment and economic development that more closely links China to the rest of Asia and onward to Europe. In this regard, it reflects China’s preference to avoid if possible formal treaties with measurable compliance requirements in favor of less formal arrangements that give it flexibility and allow it to maximize its economic and political skills.

Q4: What are the potential benefits to Asia?

A4: The “One Belt, One Road” has been referred to as China’s version of the Marshall Plan, a comparison Beijing has sought to downplay as being freighted with geopolitical undertones that it claims are absent in its initiative.

Motivations aside, the initiative is a powerful illustration of China’s growing capacity and economic clout—and the Xi administration’s intent to deploy them abroad. Properly implemented, the projects that comprise the Belt and Road could help enhance regional economic growth, development, and integration. According to the Asian Development Bank, there is an annual “gap” between the supply and demand for infrastructure spending in Asia on the order of $800 billion. Given that infrastructure is at the heart of the Belt and Road, there is room for the initiative to play a constructive role in regional economic architecture. In addition, if this leads to more sustainable and inclusive growth, it could help strengthen the political institutions in the region and reduce the incentives and opportunities for terrorist movements.

Q5: What are the potential risks?

A5: Implementing the Belt and Road will entail significant risks and challenges for China and its neighbors. Beijing’s past difficulties investing in infrastructure abroad, especially through bilateral arrangements, suggest that many of the proposed projects could well end up as little more than a series of expensive boondoggles. Given Chinese construction companies’ poor track record operating in foreign countries (including frequent mistreatment of local workers), a major increase in the scale of their external activities increases the risk of damaging political blowback that could harm Beijing’s image or lead to instability in host countries—particularly if the efforts do not generate lasting benefits for local economies. Enhanced regional connectivity might also increase the likelihood of the consequences of poor conduct abroad finding their way back to China.

Another risk is that many countries in Asia and abroad (including the United States) are concerned about the geopolitical impact of the Belt and Road. Although Beijing has sought to allay these concerns in its latest plan, stressing the “win-win” potential of the initiative, its efforts will have important foreign policy implications for a number of key regional players, including Japan, India, and Russia. Moscow is particularly concerned about the initiative translating into increased Chinese influence in Central Asia, an area it has long viewed as within its sphere of influence and where Sino-Russia competition has been noticeably intensifying of late. Meanwhile, India has been especially alarmed by Chinese investments in Sri Lanka, which New Delhi likewise views as part of its backyard.

Hence, there is a clear risk that Beijing’s efforts—well-intentioned or not—will heighten geopolitical tensions in an already tense region. There are also direct security implications of the project. The Maritime Silk Road in particular will likely expand China’s capacity to project its growing naval power abroad, while increased Chinese involvement in building regional information technology infrastructure could create new channels for Beijing to exert its influence in the region.

Alternatively, there is a substantial chance that these lofty plans will not come to fruition. China’s development strategy of “build it and they will come” has already run into difficulty at home. Should the same thing happen abroad, it could generate not only political backlash against China, but borrowers’ failure to pay back their loans, or businesses’ inability to recoup their investments could end up placing additional stress on the Chinese economy rather helping to marginally ease a deepening slowdown.

A new era of industrial policy kicks off with signing of the Chips Act
The Washington Post | Jeanne Whalen
August 10, 2022
Commentary 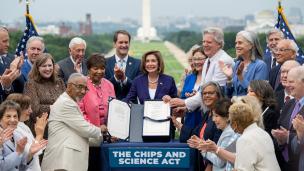 China Is the Wrong Industrial Policy Model for the United States
By Scott Kennedy
August 9, 2022
In the News

Inside the geo-politics and high stakes of semiconductors
Wbur | Scott Tong, Paul Triolo, Scott Kennedy
August 3, 2022
In the News

China’s Covid Zero Could Last for Years Because It Works for Xi
Yahoo Finance | Bloomberg News
August 2, 2022
In the News

China’s Covid Zero Could Last for Years Because It Works for Xi
Yahoo News | Bloomberg Newa
August 2, 2022
In the News

Chip stocks plunge as Nancy Pelosi lands in Taiwan. Here’s why the chip sector in particular could lose big if China follows through on its threat of ‘strong countermeasures’
Fortune | Yvonne Lau
August 2, 2022
View all content by this expert