What Can 24 Satellites Do for U.S. Missile Defense?

Despite some missile defense advocates' claims that 24 satellites could form the basis of a boost-phase space-based missile interceptor (SBI) system, many physicists do not agree.1 A better question is how could a satellite constellation of this size best contribute to U.S. missile defense?

For almost 40 years, missile defense advocates in the United States have envisioned a constellation of satellites positioned in overlapping orbits around the Earth and loaded with weapons designed to intercept missiles before they reach their targets. One of the space-based missile interceptor (SBI) systems most commonly proposed is a "hit-to-kill" model, where interceptors destroy missiles or warheads during flight using the kinetic energy of impact.2 In a hit-to-kill SBI system, these orbiting interceptors fire thrusters and change their trajectory in order to hit their targets. The range of a space-based interceptor—the distance it can travel away from its initial position on orbit—is limited by how fast the interceptor can maneuver out of orbit, the amount of propellant onboard, and the allotted time before it must reach its target. When an SBI system is modeled, these constraints work together to greatly limit the efficiency of any interceptor constellation and increase the required number interceptors on orbit to offer coverage to threat regions on the Earth's surface.

Advocates for deploying a constellation of SBIs often cite the findings from a classified 2011 Institute for Defense Analyses (IDA) report to support their claim that SBIs could offer effective boost-phase missile defense at a reasonable cost.3 But earlier this year, the Union of Concerned Scientists identified a common mistake in interpreting IDA's results: a constellation of 24 satellites could only be useful for midcourse missile defense—intercepting missiles after their engines finish burning and before they re-enter the atmosphere.4 Boost-phase missile defense—targeting missiles in their first and most vulnerable stage of flight—would require hundreds or thousands of interceptors.5

According to an unclassified letter describing details from the 2011 IDA report, 24 satellites could form a "limited" SBI layer and cost approximately $26 billion over its 20-year operational lifetime, including a full replacement after 10 years. The IDA analysis goes on to note that a "global" satellite constellation of 960 satellites, which could likely offer boost-phase coverage, would cost approximately $282 billion over the same period.6

How effective would a 24-satellite SBI layer be defending against missile launches in their boost phase? What about in the midcourse phase? What if 24 satellites were used for a different missile defense purpose entirely, like space-based sensing for midcourse tracking and discrimination?

According to analysis from the American Physical Society, RAND Project Air Force, and the CSIS Aerospace Security Project, a 24-satellite constellation is not enough for boost-phase missile defense.7 When placed in a constellation to offer optimal coverage of North Korea, for example, 24 satellites would leave the Korean peninsula completely uncovered over 75 percent of the time.8 Furthermore, these satellites would pass overhead in visible, predictable paths. An adversary would know with certainty when the constellation would provide no coverage and plan its attack accordingly. Since any gap in coverage is effectively no coverage, any constellation that does not offer continuous coverage does not meaningfully contribute to the broader United States' Ballistic Missile Defense System (BMDS).

Without a doubt, a 24-satellite SBI system is physically incapable of maintaining continuous coverage over even a small relatively region like Korea for boost-phase missile defense. 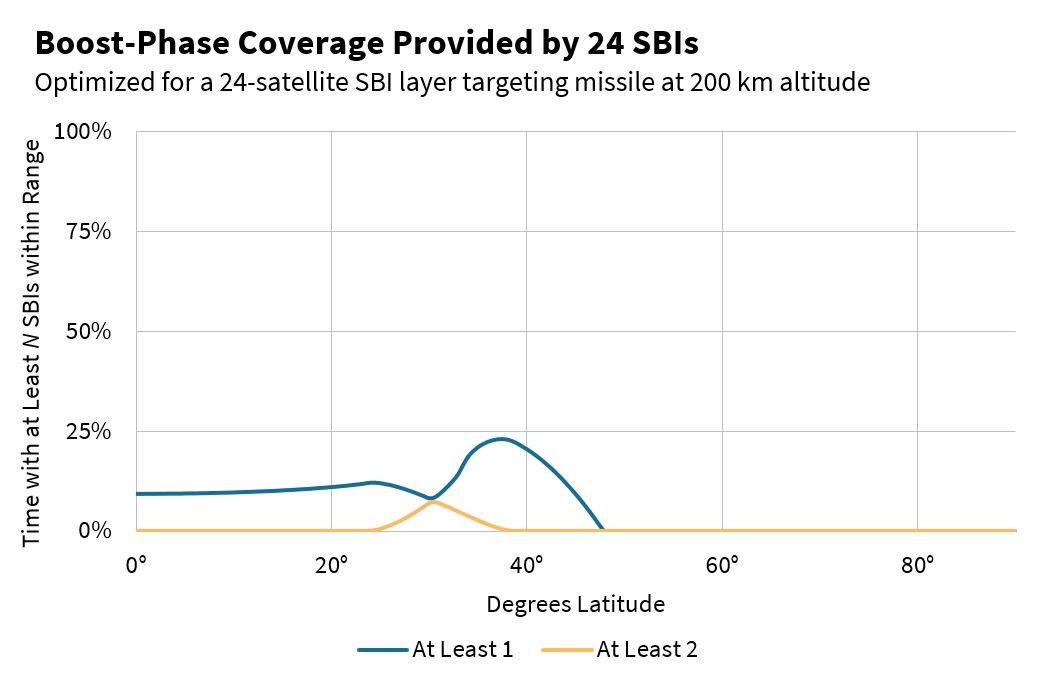 Figure 1: Boost-Phase Coverage for a 24-Satellite SBI System. 9 If 24 satellites were oriented in four orbital planes, at an altitude of 300 kilometers and 40.5° inclination, North Korea (ranging from approximately 38°N to 43°N) would be left uncovered over 75 percent of the time.10

Without a doubt, a 24-satellite SBI system is physically incapable of maintaining continuous coverage over even a small relatively region like Korea for boost-phase missile defense.

24 Satellites Could Be Enough for a Midcourse SBI Layer

Depending on its orientation, a 24-satellite SBI layer could effectively contribute to limited midcourse missile defense. Since the midcourse phase represents the majority of a missile's flight (upwards of 10 minutes for an intercontinental ballistic missile), interceptors would have much more time to reach their target than they would during a missile's boost phase (which may only last two or three minutes).12A 24-satellite constellation in the same orbits as described in the previous section would provide continuous midcourse missile defense coverage for missile trajectories below 60°N, which would cover a North Korean missile strike targeting Guam and the West Coast of the continental United States, including Seattle and Los Angeles.13 Missiles traveling to the United States from Russia, China, or Iran, however, would travel over the Earth's north pole and would not be fully covered by this particular SBI constellation. 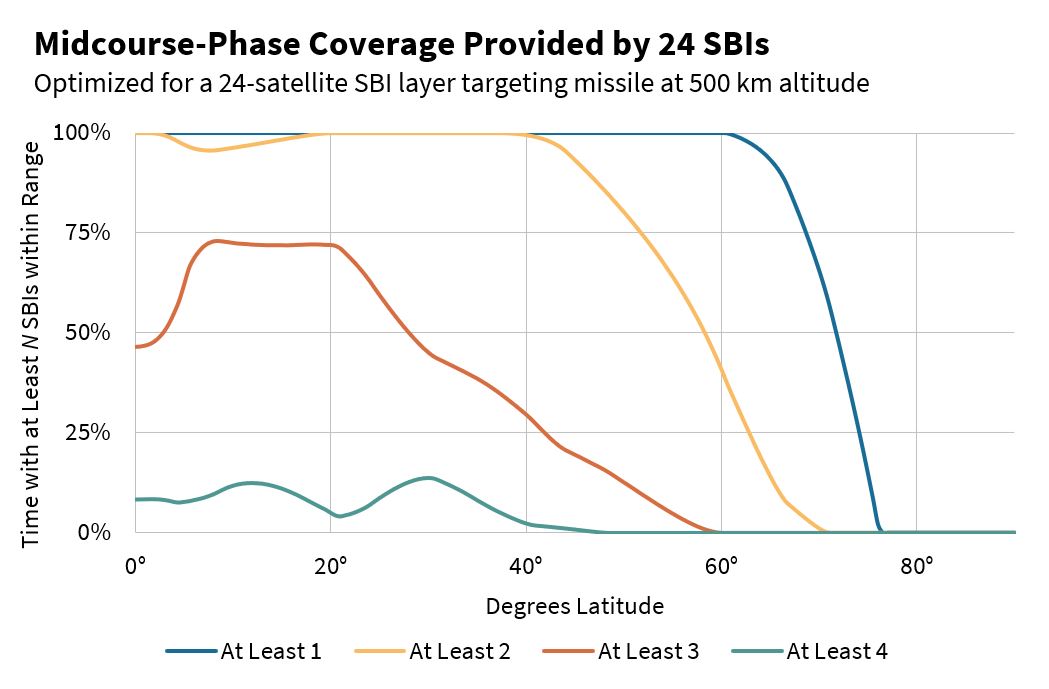 Figure 2: Midcourse-Phase Coverage for a 24-Satellite SBI System. 14 If 24 satellites were placed in the same orientation as those in Figure 1, the missiles that reach their midcourse phase between 60°S and 60°N latitude would always be within reach of at least one interceptor. For some latitude bands, like that between 20°N and 40°N, there are always two or more interceptors within reach.

Although 24 satellites may be enough to reach a North Korean missile during its midcourse phase, an interceptor would not be able to successfully strike its target without sufficient midcourse target discrimination—specifically a greater fidelity of tracking data to distinguish the warhead from decoys and debris. To achieve this capability, some missile defense advocates propose the deployment of a space-based sensor (SBS) layer.15

24 Satellites Are Enough for an SBS Layer

Although a constellation with only 24 satellites offers limited continuous midcourse-phase and no continuous boost-phase coverage, the same number of satellites could provide excellent world-wide sensor coverage.

The already-deployed Space-Based Infrared System (SBIRS) satellites track missiles in their boost phase—honing in on the heat signatures produced by rocket engines using infrared sensors. They are not designed to track missiles during their midcourse phase when they must be observed as relatively cold objects against the even colder background of space. After a missile's engines burn out, the heat signature goes dark, and they cannot be easily tracked using infrared systems. An SBS layer in low Earth orbit could use radar or optical sensors to monitor missiles mid-flight—well past the boost phase—discriminating between warheads, decoys, or other debris created during the midcourse phase.16

The proposal to build an SBS layer for midcourse tracking and discrimination is not new.17 First proposed as part of the Reagan administration's Strategic Defense Initiative, an SBS layer—nicknamed "Brilliant Eyes"—was first envisioned in the late 1980s.18 In the 1990s, the Clinton administration included an SBS layer in its proposal for the SBIRS program, calling it "SBIRS-low." 19 In 2001, the Missile Defense Agency took control of the program, renaming SBIRS-Low the "Space Tracking and Surveillance System" (STSS), and scaled the program back to just two demonstrator satellites (STSS 1 and STSS 2), which were launched in 2006.20

Although STSS was originally proposed as a 20- to 30-satellite constellation, there are currently no plans to build out the program, and the two demonstrator satellites are not integrated into the overall BMDS architecture. 21

Suppose a 24-satellite SBS system were launched to the same altitude and inclination of the two STSS demonstrator satellites. That constellation would offer full-Earth coverage, sensing missiles launched from anywhere on Earth during their midcourse phase. 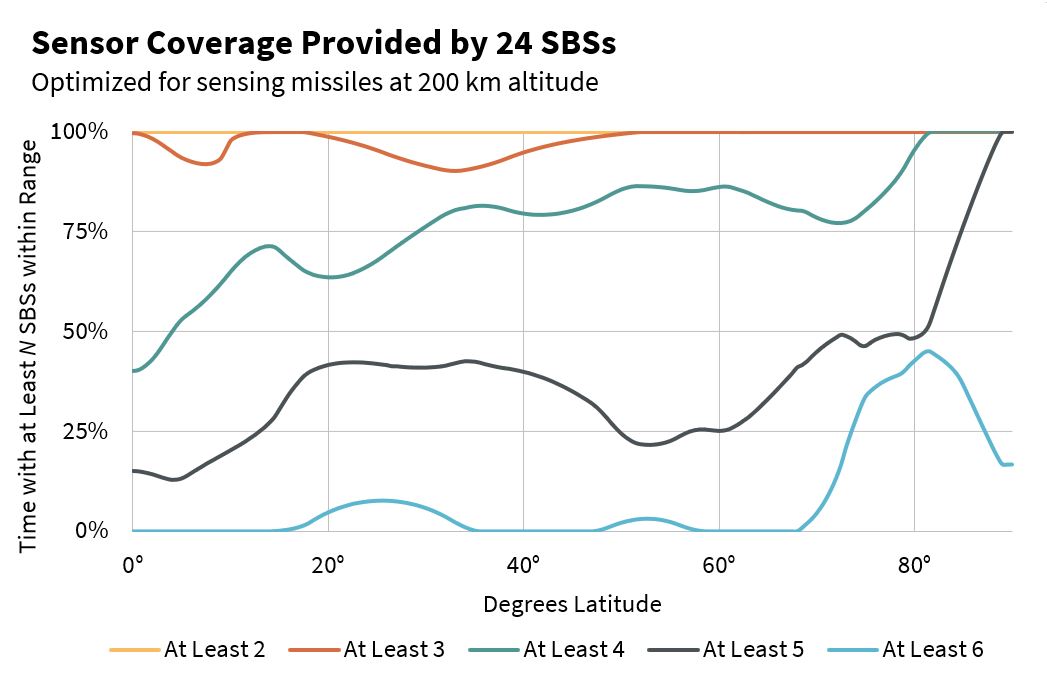 Figure 3: Sensor Coverage for a 24-Satellite Space-Based Sensor Layer. 22 If 24 satellites were oriented in constellation with parameters similar to the two STSS demonstrator satellites (1350 km circular orbits with 58° inclination),23 missiles launched from anywhere on Earth would be within view of at least two sensors for the entirety of the midcourse phase of their flights. Missiles flying to significantly higher latitudes than 200 km could be sensed by many more than two satellites.

Space-based sensors stay in orbit as they track missiles and discriminate between a missile's warhead and other debris that may have been created during flight. Unlike interceptors, a sensor's range is constrained by the Earth's horizon (a sensor cannot track a missile if it is on the other side of the world) and the atmosphere (observing a missile at a low angle relative to the horizon can cause signal fade and distortion). 24 Thus, missiles that reach higher altitudes can be seen by more sensors in the 24-satellite constellation. If a missile reaches an altitude of 1000 kilometers or higher, for example, five or more sensors in this hypothetical constellation can track it for a portion of its trajectory, no matter its destination or origin. This redundancy is extremely helpful since the accuracy of missile tracking and discrimination only increases with additional sensors in contact.

[A]n interceptor would not be able to successfully strike its target [in its midcourse phase] without sufficient midcourse target discrimination.

SBI systems are regularly touted for their ability to strike missiles during their boost phase. A constellation with only 24 satellites, however, is not enough to be effective at boost-phase missile defense. When considering midcourse intercepts, the same constellation fairs better—offering limited coverage to some portions of the Earth.

An SBS layer, on the other hand, would operate well with only 24 satellites in low Earth orbit. An added benefit is that the same constellation, when not being used to track missiles, could be used to track other satellites in space. It would complement the Air Force’s existing space situational awareness architecture, to better track other space objects and more accurately warn of potential collisions.24

Due to the coverage limitations of hit-to-kill SBIs, a constellation of 24 satellites would be a more effective missile defense system if it supported sensors rather than interceptors.

Thomas G. Roberts is a program coordinator and research assistant for the Aerospace Security Project at the Center for Strategic and International Studies in Washington, D.C.