Germany Races to Prepare for a Gas Cutoff

With Europe racing to prepare for next winter, Russia continues to curtail its pipeline gas exports. On July 21 the Nord Stream 1 pipeline returned from scheduled maintenance at just 40 percent of capacity. Reduced volumes or an unscheduled shutdown will jeopardize efforts by Germany and other EU economies to refill their gas inventories by late fall. The European Commission has urged all member states to reduce their gas use by 15 percent beginning on August 1, and the International Energy Agency is advocating emergency plans for gas shortages this winter. The risks to EU economies are growing.

A1: The Nord Stream pipeline, with nameplate capacity of 55 billion cubic meters (bcm) per year, was shut down July 11 for maintenance and returned to service on July 21 at just 40 percent of capacity. Nearly four weeks before this maintenance period began, Gazprom cut Nord Stream export volumes by 60 percent, blaming export controls in Canada that delayed the return of a gas turbine undergoing maintenance in a Siemens Energy facility. The German government successfully lobbied Canada for sanctions exemptions for six turbines being serviced in Canada. A turbine has now been shipped to Germany but may not be installed at a critical compressor station in Russia until late July. The German economy ministry claims this turbine is a replacement part and believes Russia is using the issue as a pretext to curtail gas exports. In a letter dated July 14, Gazprom declared force majeure on supplies to several major gas buyers including Germany’s RWE and Uniper, retroactively applying this designation for supplies beginning on June 14.

The ongoing Nord Stream threats are part of a broader pattern. Russia halted gas supplies to Poland and Bulgaria in late April after those countries refused to pay for gas imports in rubles. It subsequently cut off gas supplies to Finland, the Netherlands, and Denmark. In June, overall Russian pipeline flows to Europe via Nord Stream, Turk Stream, and Ukraine fell by more than 40 percent over the previous month, to just 4.7 bcm.

Q2: What will Russia do next?

A2: Russia is cutting off gas supplies and threatening more shutdowns to pressure European customers and thwart their plans to prepare for next winter. The key question is whether Russia wants to maximize pressure now and derail Europe’s plans to refill its gas inventories by the fall, or if Moscow wants to keep its powder dry until later in the year. As of July 19, EU-wide gas storage was 65 percent full. The European Union has urged all member states to replenish their inventories to 80 percent of capacity by November (Germany has a target of 95 percent by that date). Lower export volumes at Nord Stream have already made it difficult for countries to achieve this target, but an extended shutdown of the pipeline could make it impossible. Germany’s Federal Network Agency—a regulatory agency that covers gas, electricity, and other sectors—estimates that if Nord Stream remains at 40 percent of capacity and the country reduces its re-export volumes, it will fail to meet its inventory target. In various scenarios with zero Nord Stream supplies, Germany will be unable to meet winter demand without large reductions in consumption and re-export. 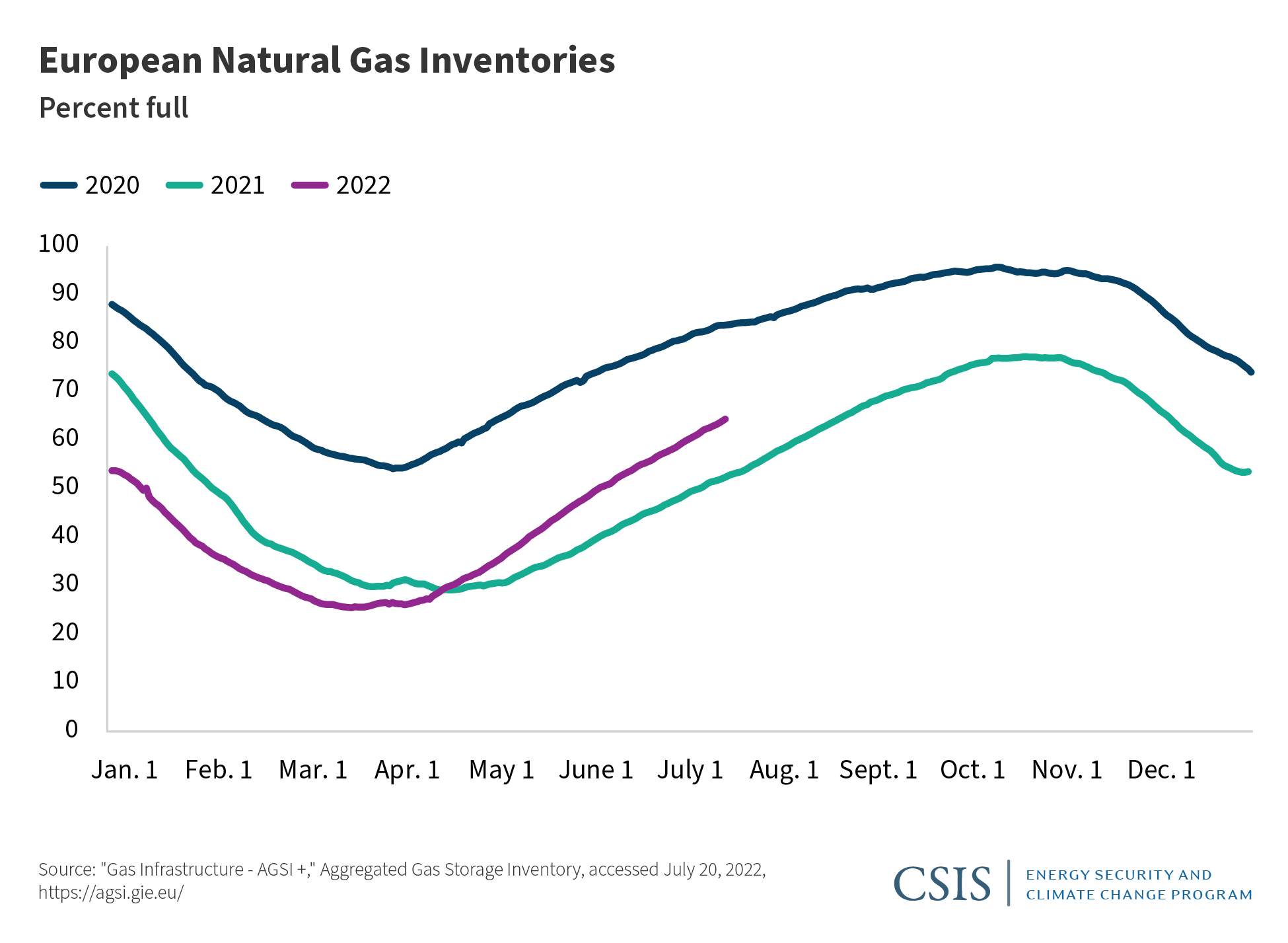 Nord Stream troubles are hardly finished. Russia continues to cast doubt on future flows, blaming sanctions-related difficulties. Supplying gas at lower volumes will squeeze European economies while continuing to generate export revenues from Russia, boosted by the steep climb in gas prices since June. For now, Russia has stopped short of a complete shutdown of Nord Stream, since doing so would deprive Russia of export revenues, remove its strategic threat, and give EU policymakers several more months to adjust. But it is hard to imagine that Russia will enable an easier glide path for Europe ahead of this winter.

European policymakers are assuming the worst. European Commission president Ursula von der Leyen suggested several weeks ago that Europe had to prepare for a full cutoff of Russian gas. She has urged all member states to generate contingency plans and coordinate efforts to cut gas demand and maximize energy efficiency. Brussels is encouraging immediate cuts in gas demand to avoid hasty decisions over gas rationing later in the year in the event of a sudden disruption. On July 20, the European Commission adopted a demand reduction plan targeting a 15 percent demand cut beginning on August 1.

Q3: How is Germany preparing?

A3: Germany, the world’s third largest net gas importer, is preparing for a full shutoff of Russian gas. Guided by its Emergency Plan for Gas, Germany is taking both demand- and supply-side measures, with the former playing a more critical role in the coming months. A gas scenario analysis by the Federal Network Agency identified demand reduction as key to safeguarding security of supply for Germany and its neighbors this winter. (Germany is a gas transit country, and several countries including the Czech Republic, Poland, and Switzerland depend on its re-exports.)

Gas demand in Germany fell by 14 percent in the first five months of 2022 compared to last year, due to higher temperatures in the spring months as well as higher prices, but the country is taking several additional measures to reduce demand. In industry, Germany is introducing an incentive mechanism to save gas. Major consumers and suppliers can offer their unused gas in an auction, with winning bidders getting paid for the fuel they make available to the market. In the power sector, Germany is reactivating emissions-intensive coal-fired power plants, in a “bitter” decision for the Greens who are part of the governing coalition. Even extending the use of nuclear power plants now seems possible, depending on the results of an ongoing stress test for the electricity grid. Previously, in an assessment in March, the relevant ministries vetoed nuclear power extension. Germany’s three remaining nuclear power plants are scheduled for phase-out by the end of 2022.

In June, after Nord Stream volumes were cut, Germany declared a stage two emergency (in line with EU regulations, Germany’s Emergency Plan for Gas has three stages). If policymakers assess that market-based measures will not be sufficient to safeguard supplies this winter, the country will move to stage three of its emergency plan, involving sovereign measures including gas rationing.

On the supply side, the share of Russian imports decreased from 55 percent in 2021 to 26 percent by June 2022, in part due to supply cuts by Russia. Germany is taking various measures to increase supplies from other countries. For example, the government requires operators to fill their leased storage up to 95 percent by November 1 or risk forfeiting this space to the government. The government bought 1 bcm of gas in March and made available a credit line of €15 billion to fill unused storage space. These measures increased indirect liquefied natural gas (LNG) imports via Belgium and the Netherlands. Germany has no domestic LNG import capacity at present, but has plans for at least five floating LNG import terminals as well as two permanent onshore sites. The challenge, however, is not only to fast-track terminals, but to secure volumes in a tight market. German companies have been reluctant to sign long-term deals, partly due the conflict of goals between immediate gas needs and longer-term plans to phase out fossil fuels. The LNG supply contracts already signed are either short-term contracts, or long-term deals with flexible terms that allow shipments to be diverted or cancelled for a fee. The first German floating LNG import terminals are expected to start operation by January 2023, perhaps just in time to help Germany make it through the latter part of the winter.

Q4: What are the risks to the German economy?

A4: A shutoff of Russian natural gas would hurt the EU’s biggest economy, but the scale of damage is uncertain. Various studies estimate an economic contraction of 0.2 to 5 percent of GDP in 2022, with deeper impacts in 2023 and lesser impacts in later years. This compares to an economic contraction of 5 percent of GDP due to the pandemic in 2020.

A key variable is how gas is rationed. If households and the energy sector are fully protected and all other sectors are cut off equally, the economic effect would be more severe. Additional rationing of supplies to gas intensive industries such as non-metallic minerals and the chemical industry could soften the economic impact. Rationing gas for industries with strong downstream linkages such as iron, steel, or paper, however, could be risky: the negative effects on other industries could outweigh any benefits.

GDP loss can be minimized if households and the energy sector share some of the burden—but this would entail changing the currently protected status of households in Germany. The Federal Ministry for Economic Affairs and Climate Action—which would be responsible for gas rationing—is questioning the underlying EU regulation. According to Minister Robert Habeck, the regulation is designed for short-term and regional supply interruptions, not for the current situation. While households will remain partly protected, the government may suggest that households lower temperatures this winter to reduce cutoffs for industry. New energy-saving measures released on July 21 include a ban on heating swimming pools in private homes in winter. As of now, the ministry has not indicated which sectors will be targeted first in the case of gas shortages.

Germany is grappling with higher costs for gas supplies and for building new infrastructure, and it is bailing out a major energy firm. The government has now taken a 30 percent equity stake in Uniper, its largest gas importer, and the development bank KfW has extended its credit line from €2 billion to €9 billion. Uniper has been forced to buy gas at higher prices to substitute for Russian supplies without being able to pass on the added cost to consumers. But Germany now plans to introduce a “general mechanism for all gas importers to pass through 90 percent of the replacement costs for missing Russian gas” as of October 1. Like the bailout of the German airline Lufthansa during the pandemic, the capital injection in Uniper requires a legal amendment. A new article in Germany’s energy security act allows rescue measures for energy companies. The energy security act has existed since 1974 and has been used by the government to enhance its crisis management toolkit. The draft law was approved by the cabinet on July 5, passed the parliament in the following days and came into effect on July 12.

European Union , Russia , Energy and Sustainability , and Energy and Geopolitics