New imagery analysis from the Center for Strategic and International Studies (CSIS) of Russian operations in Libya indicates the breadth and depth of Russian involvement, as well as its limits in altering the conflict’s trajectory, as seen in recent setbacks for Moscow’s primary partner, General Khalifa Haftar and the Libyan National Army (LNA). Imagery released in late May by U.S. Africa Command (AFRICOM) displayed Russia’s deployment of at least 14 combat aircraft, including Su-24 attack, MiG-29 fighter, and Su-35 interceptor escort aircraft, from bases in Russia and Syria to Libya’s Al Khadim and Al Jufra air bases. A closer examination of Russia’s deployment at Al Jufra Air Base reveals not only an expansion of Russian air activity but also of its ground forces, namely the Russian private military company (PMC) Wagner Group, the core component of Russia’s intervention in Libya.

Since 2015, Russia has provided military, diplomatic, and financial support to Libya’s eastern-based government in Tobruk and the LNA in its war against the UN-backed Government of National Accord (GNA) in Tripoli. Since 2017, Russian support has centered on training, equipping, and advising the LNA and its commander, General Khalifa Haftar, for its push into central and western Libya, alongside Haftar’s other backers, Egypt and the United Arab Emirates. At the vanguard of Russian military efforts has been the Wagner Group, which by 2018 had deployed several hundred mercenaries to multiple training sites, airfields, forward bases, and key energy and infrastructure sites, thus supporting the LNA as well as securing Russian interests. Russian PMC activity surged in the summer of 2019 to bolster Haftar’s flagging western Libya campaign and enable an LNA offensive against Tripoli. By early 2020, up to 1,200 Wagner mercenaries were on the ground in Libya, to then be supported from the air with the arrival of Russian combat aircraft.

Strategically located in central Libya, Al Jufra Air Base has served as the main air and logistics hub for LNA advances into western Libya and launching point for the Tripoli offensive. The airfield hosted multiple Libyan air force squadrons during the Gaddafi regime, and dozens of aircraft remain abandoned there. Russian aircraft and Wagner mercenaries reportedly began operating at Al Jufra in 2019, and that presence expanded in 2020. CSIS imagery analysis of Al Jufra from June 6, 2020 displays the breadth and depth of Russian support and activity. 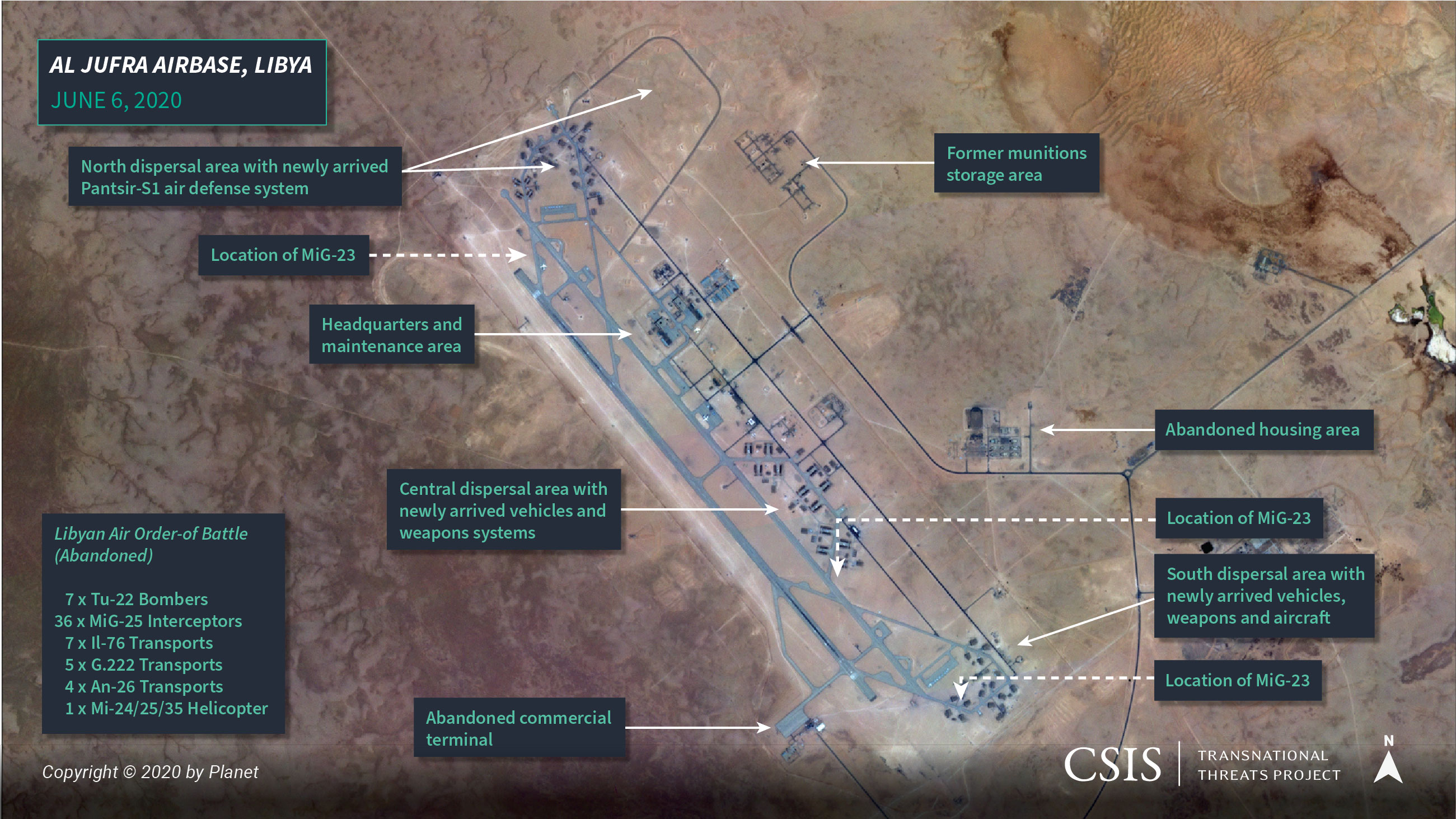 Analysis of additional imagery beginning in mid-May suggests a buildup of Russian forces at Al Jufra and readying for an influx of aircraft. Russian Pantsir-S1 surface-to-air missile (SAM) and anti-aircraft artillery systems are deployed on the northern side of the base, most likely to deter and defend against Turkish airstrikes. New ground weapons, equipment, vehicles, and tents were observed across the facility, including at a MiG-29 hangar, probably in preparation for the aircrafts’ arrival. 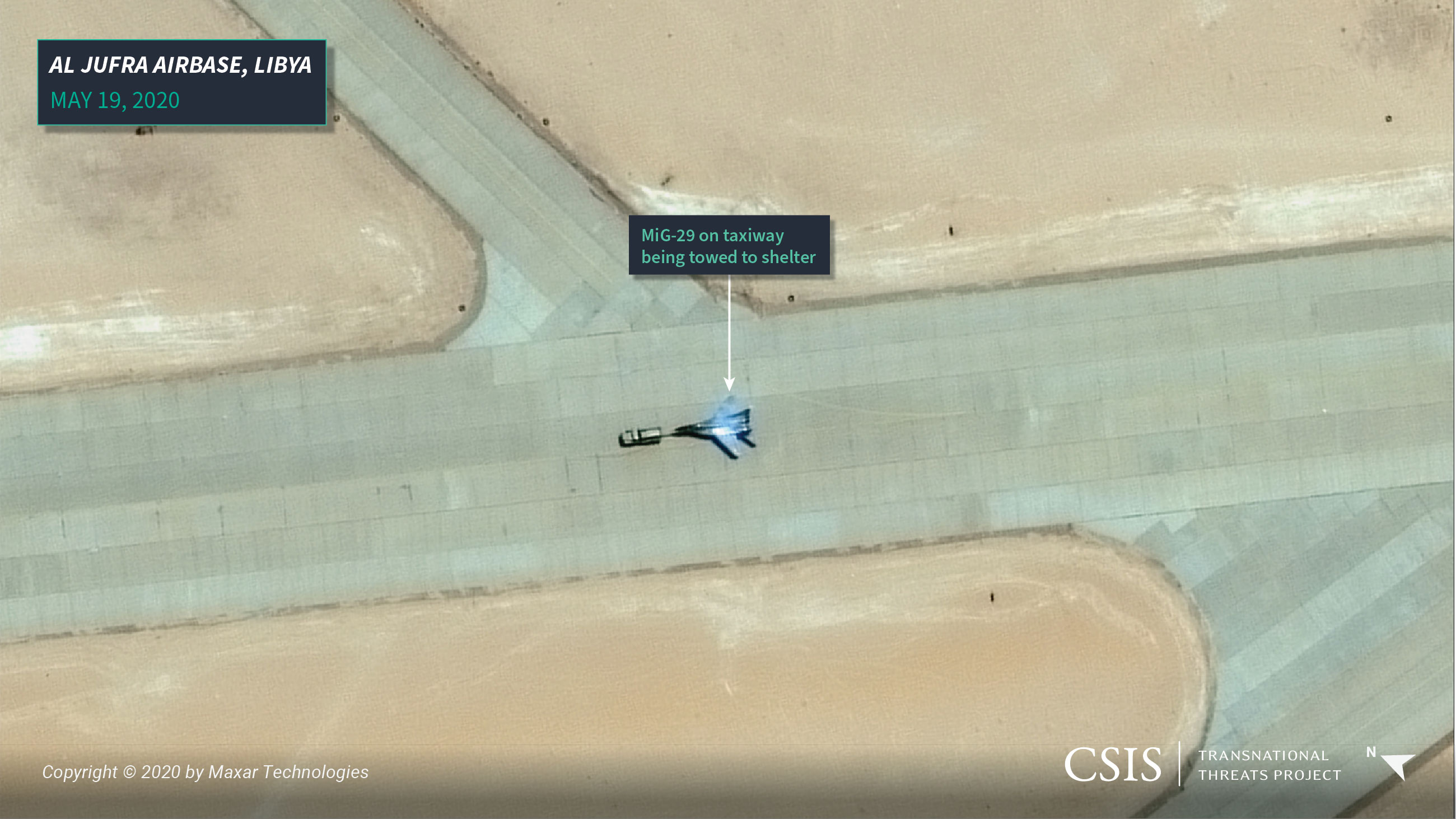 The arrival of MiG-29 fighters and Su-24 attack aircraft at Al Jufra on May 19 was most likely intended to provide enhanced close air support and offensive firepower to LNA and Wagner Group ground forces operating to the north, on Tripoli’s southern outskirts. There, by late May 2020, Wagner and LNA fighters were increasingly bogged down by Turkish-backed GNA forces after rapid gains earlier in the year, achieved in large part through growing Russian ground combat power.

While Russian PMC personnel have been training and equipping LNA forces in 2017 for a variety of ground, air, and air defense missions, in the fall of 2019 Wagner Group forces began to take on direct combat roles for the Tripoli offensive. Several hundred Wagner Group specialists have forward deployed with LNA units in and around Tripoli, employing Russian assets, including snipers, anti-tank guided missiles, electronic warfare, reconnaissance unmanned aerial vehicles, SAMs, and precision-guided artillery, to execute vital combat tasks.

Al Jufra Air Base has served as a critical transport and staging area for forward-deployed Wagner and LNA units operating in and around Tripoli. However, since April, as the Turkish-backed GNA counteroffensive has erased many of the LNA’s gains, Al Jufra also appears to be serving as the fallback location for Wagner Group forces retreating from the Tripoli assault. In April, GNA forces seized Al Watiyah Air Base to the west of Tripoli, forcing Russian PMCs to withdraw, abandoning multiple Pantsir-S1 SAM systems and other equipment. In May, GNA and Turkish forces pressed south and, by May 24, compelled the withdrawal of hundreds of Wagner Group personnel. According to open-source reporting, Russian fighters retreated south with heavy weapons and equipment to the key junction town of Bani Walid, located 180 kilometers south of Tripoli, and on May 25 departed for Al Jufra.

The imagery below depicts the arrival of a large contingent of Russian forces and equipment at Al Jufra on May 28. Based on geospatial analysis and open-source reports, we assess this contingent was most likely the retreating Russian elements from Bani Walid. 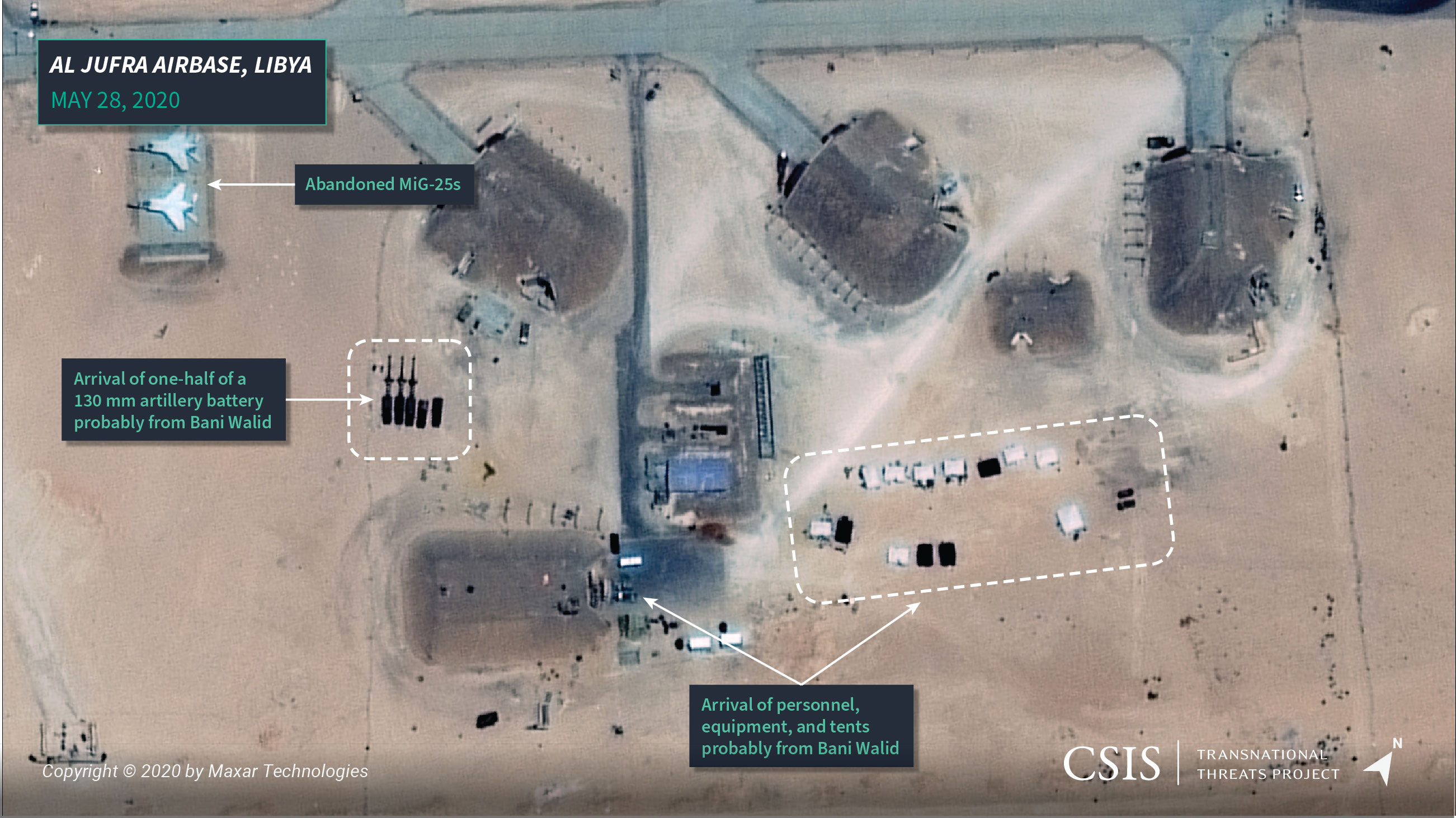 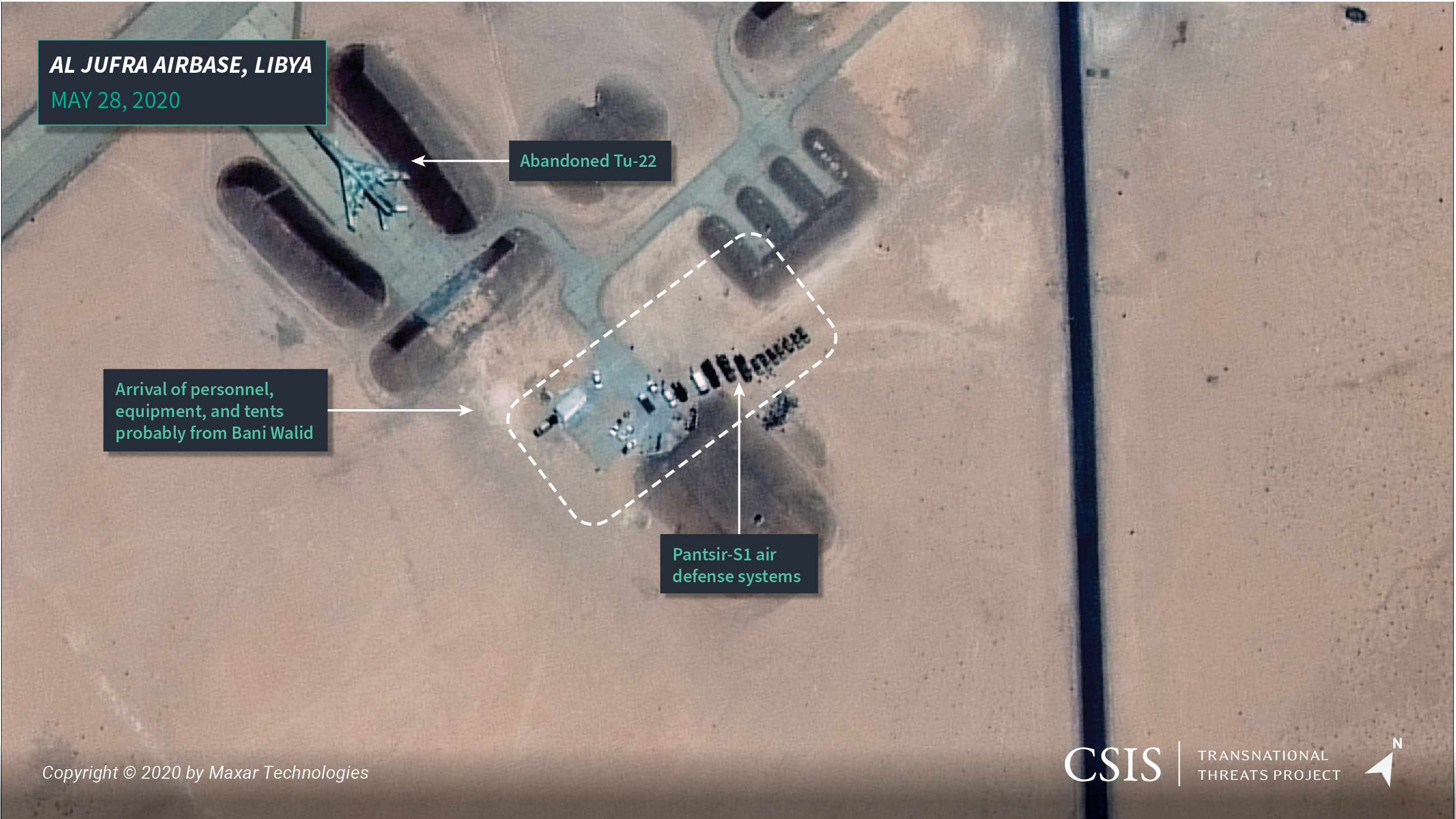 Image 3 indicates the arrival on May 28 of one-half of a Russian 130 mm towed artillery battery, accompanying equipment and vehicles, and numerous personnel as indicated by new tents on the base. Image 4 depicts the arrival, on the same day, of a new Pantsir-S1 system, along with additional vehicles, equipment, and personnel, most likely withdrawn from LNA and Wagner Group forward locations south of Tripoli.

Russia’s intervention in Libya and deployment of PMCs achieved significant LNA territorial gains while strengthening Moscow’s geostrategic position in the country but has also revealed the limits of its PMC-led proxy warfare approach. Haftar’s Wagner-enabled assault on Tripoli triggered a large-scale escalation from Turkey, which itself deployed proxy forces, including thousands of Syrian fighters, to stall LNA advances in early 2020. With Moscow still denying Russia’s presence and operations in Tripoli, Turkey and the GNA have pressed their counteroffensive and, as of mid-June 2020, have retaken most of the LNA’s advances from earlier in the year, including critical positions in Tarhuna, Sirte, and Bani Walid. 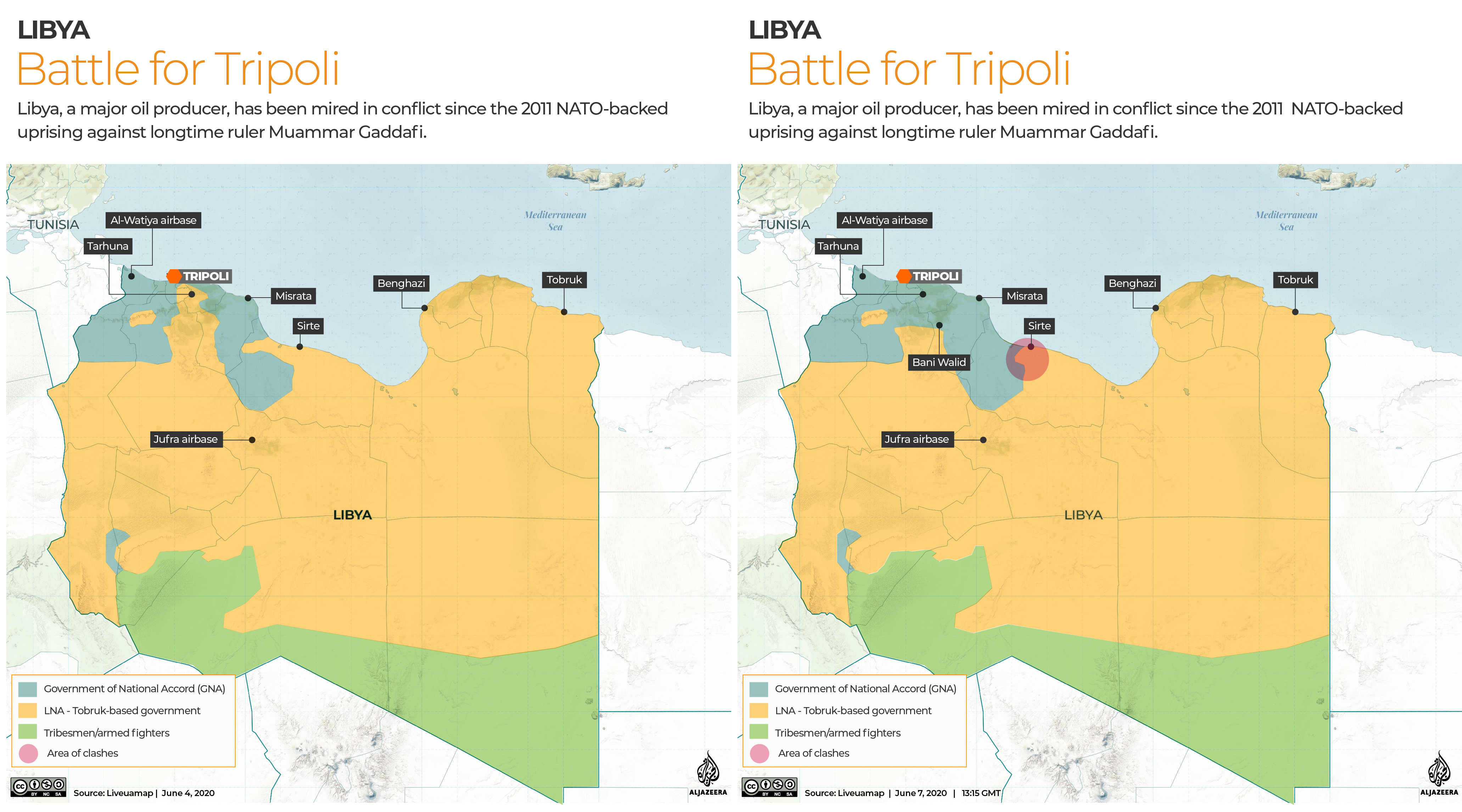 
Despite the withdrawal of hundreds of Wagner Group mercenaries from Tripoli, Russia almost certainly remains committed to supporting Haftar and will continue to provide military support to the LNA, including at strategic locations and bases such as Al Jufra. The imagery below from June 8 depicts a Russian Su-24 attack aircraft taxiing on an Al Jufra runway and a MiG-29 fighter in flight over the base, demonstrating continued Russian military activity. 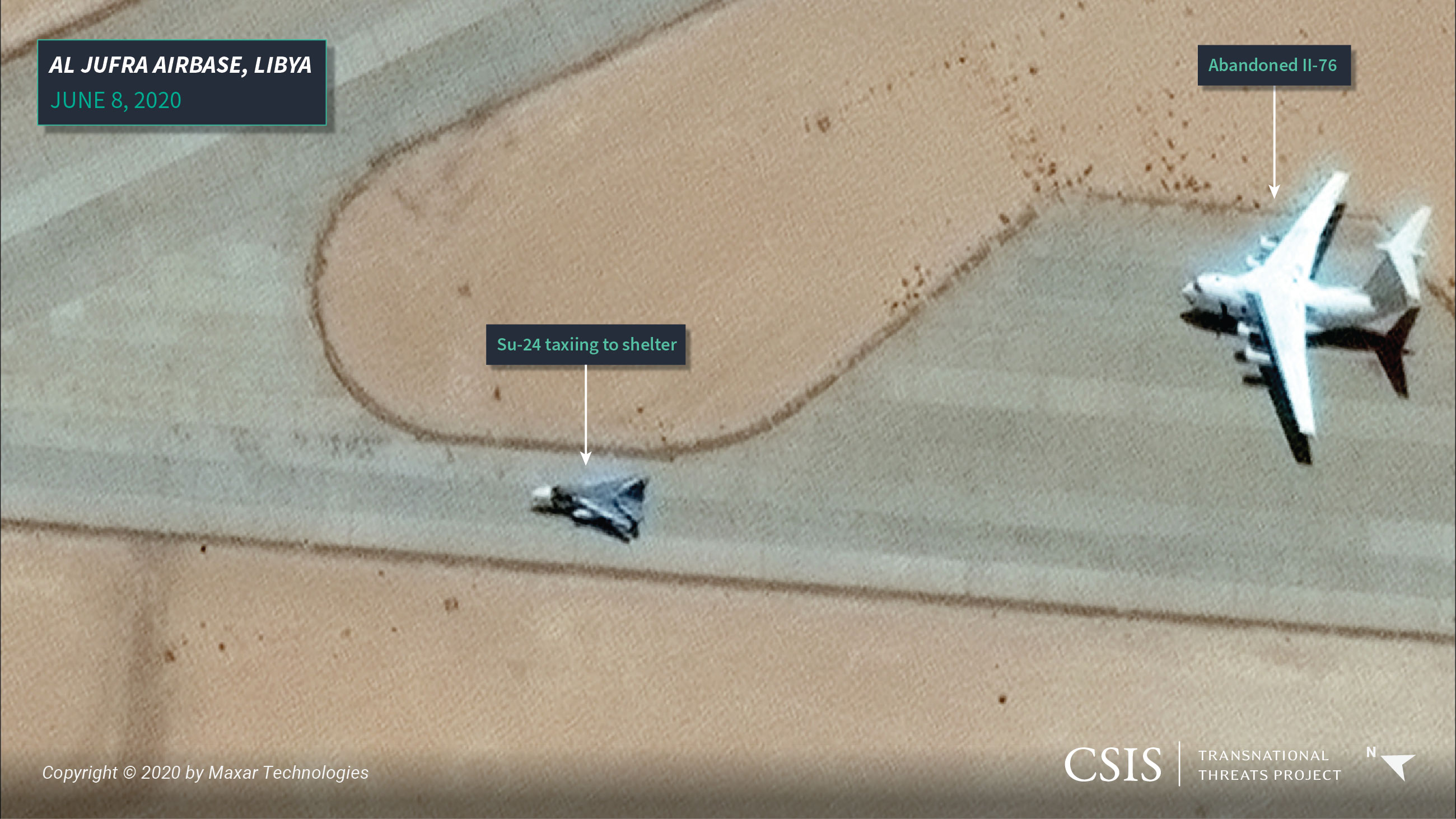 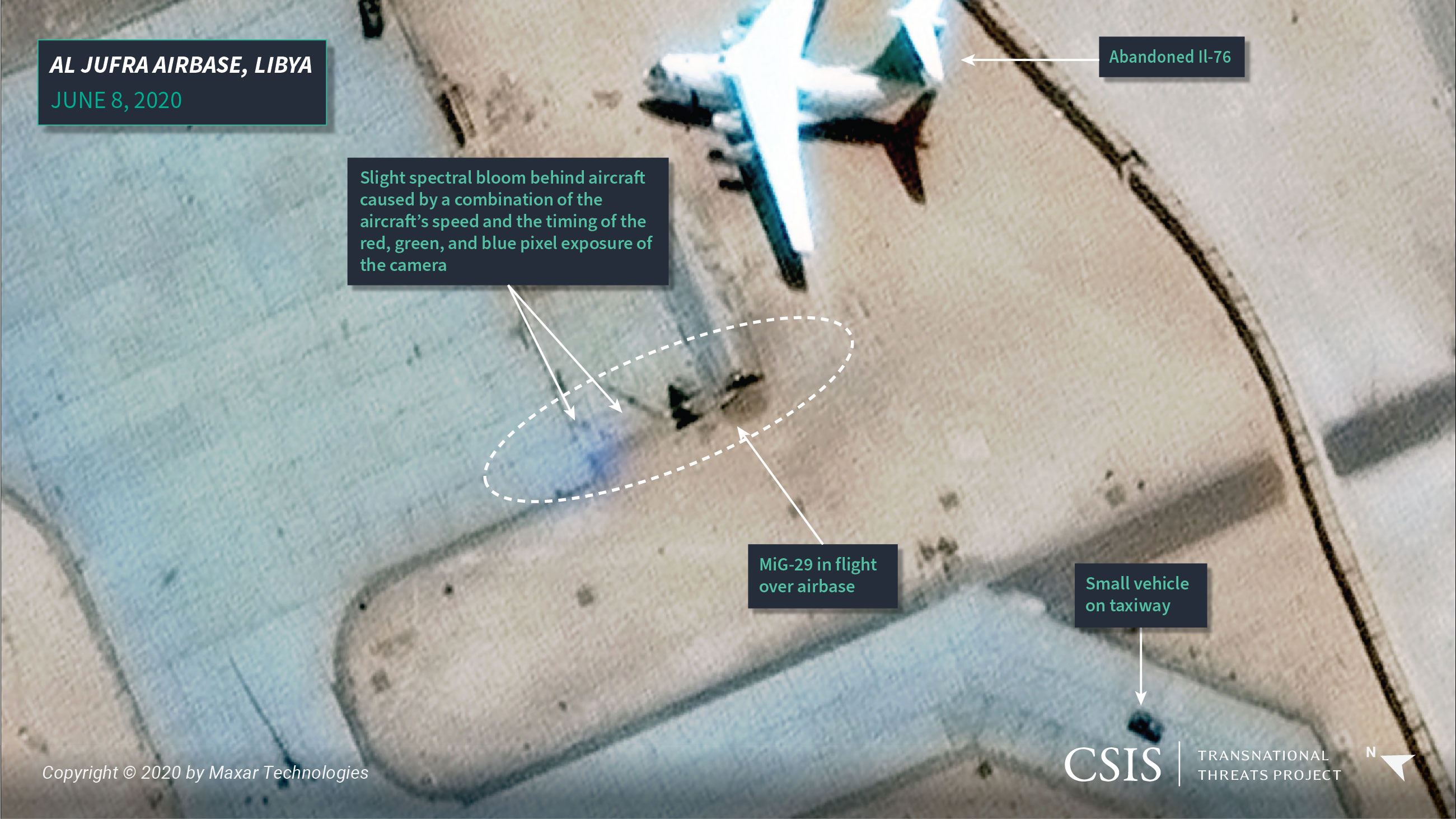 While Moscow weighs the importance of LNA setbacks and heavy Wagner Group losses, including dozens of fighters killed and key weapons systems such as UAVs and Pantsir-S1s seized or destroyed, PMC forces and key assets such as combat aircraft are likely to remain deployed at Jufra and key sites in eastern Libya. While Russia’s PMC-led intervention met its limit on the frontlines of Tripoli, it has ensured for Moscow a new strategic foothold in North Africa and on the Mediterranean.

Brian Katz is a fellow in the International Security Program at the Center for Strategic and International Studies (CSIS) in Washington, D.C. Joseph S. Bermudez Jr. is senior fellow for imagery analysis (non-resident) at CSIS.