A Post-Covid-19 Reset: The Future of Africa’s Foreign Partnerships


A new relationship is possible. In the wake of a once-in-a-century pandemic, there is an opportunity for sub-Saharan African countries and their external counterparts to establish more equitable, collaborative, and constructive partnerships. While the region so far has curbed a massive spread of Covid-19, it remains mired in an economic crisis and vexed about insufficient assistance from the outside world. African governments and publics are asking for greater equity in vaccine distribution, more generous debt relief, and targeted investment in key economic sectors. Moreover, African leaders say they are fed up with the unequal treatment in the global community, the harassment of their citizens abroad, and the zero-sum premise of global power competition.

If a reset is in the offing, Africans and their international partners need to be clear-eyed about the trends reshaping the region. It is also necessary to manage expectations: there almost certainly will be tensions and trade-offs about what is needed, what is wanted, and what is possible in a post-Covid-19 world. Building new relations will take foresight and persistence; African and international governments will need to tackle pressing challenges with an eye toward addressing and resolving enduring threats and systematic barriers to peace, prosperity, and equitable partnerships.

In a post-Covid-19 world, sub-Saharan African countries will wrestle with seven policy imperatives. While the first two challenges stem directly from the pandemic and related upheaval, the other five have troubled the region for years. These recent and longstanding dynamics are reshaping sub-Saharan Africa, spurring a recalibration of its foreign ties. 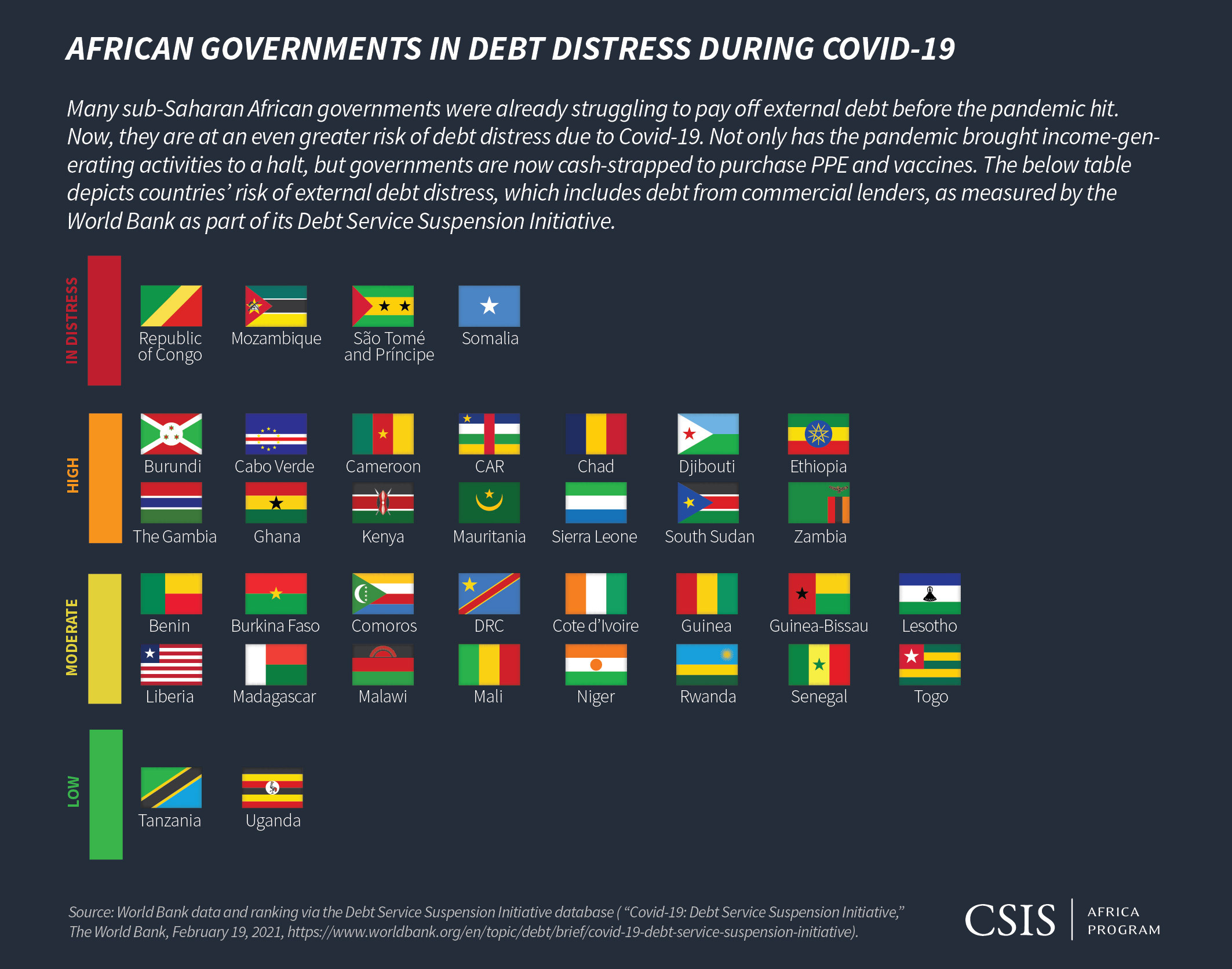 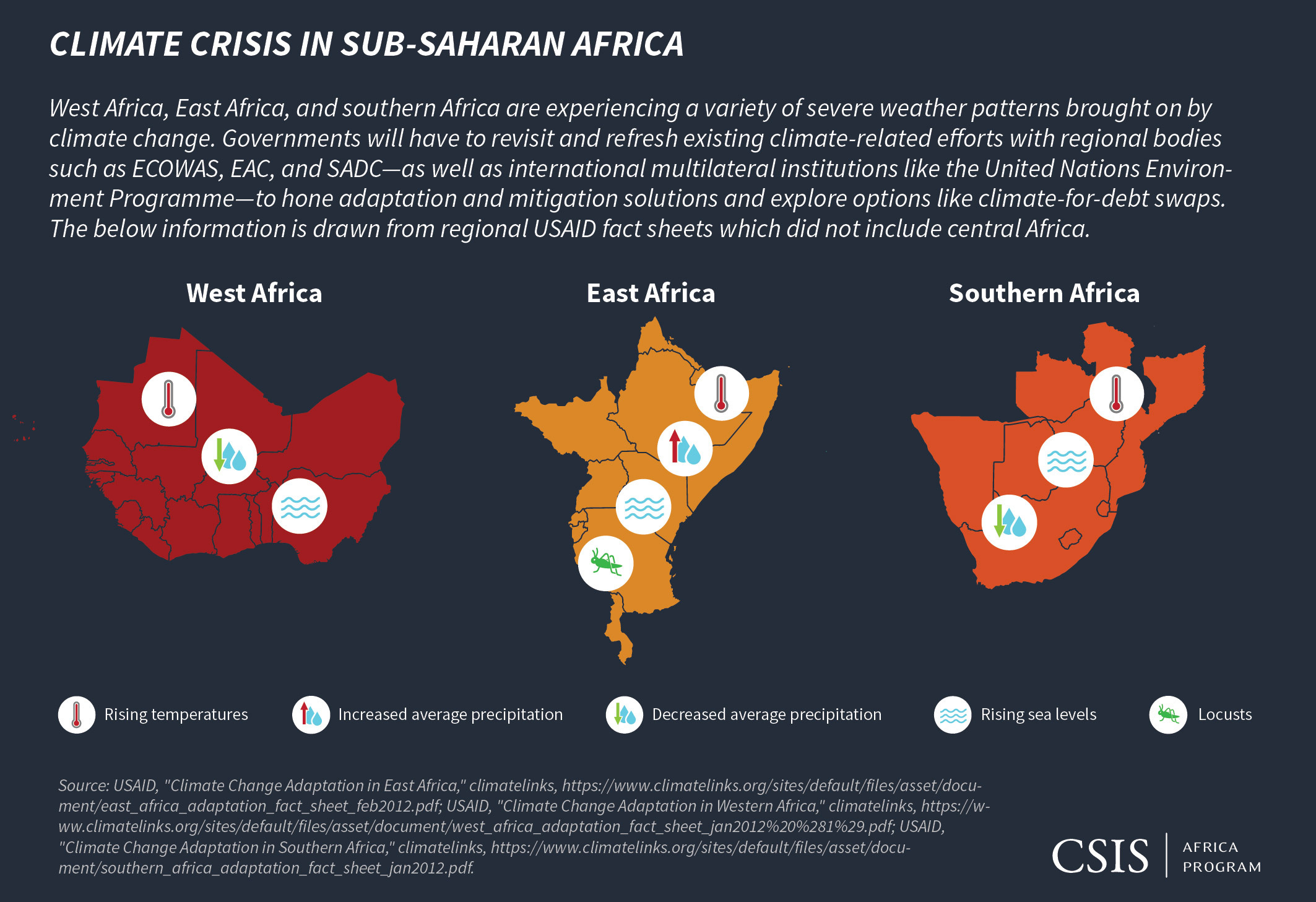 Wanting More from Each Other

Even before the pandemic, there was an emerging consensus that sub-Saharan Africa’s relations with external partners were due for an overhaul. In 2017, Ghanaian president Nana Akufo-Addo thundered that “we can no longer continue to make policy for ourselves in our continent on the basis of whatever support that the Western world can give us.”12 Several foreign partners, from the United States to China, Russia, and India, pledged to increase engagement and break from past practices. Even the small island country Malta vowed to be different; its representative to the African Union proclaimed its policy could no longer be about selling Twistees, an iconic Maltese snack. He stated that it was essential “to take a different view, and engage, and Malta should be there, changing the way Europe speaks about Africa, and speaking about SMEs [small and medium-size enterprises], both for Africa and for Malta.”13

Since the Covid-19 outbreak, however, African leaders and publics have sharpened their critiques of and insisted on much more from their foreign partnerships. The region’s governments have tapped into public frustration about the virus’s foreign origins, the shallowness of the international response, and overbearing public health guidance from countries that are failing to curb their own outbreaks.

Foreign governments have tried to respond, at times falling over themselves to prove that they are more responsive than their geopolitical rivals. At least 24 countries have provided medical supplies and financial assistance to sub-Saharan Africa between March and December 2020.19

But Priorities Are Not Entirely Aligned

The tension between what Africans, African governments, and external partners want from one another acts as a brake on a post-Covid-19 reset. It may not be possible to reconcile these different agendas, but understanding and acknowledging these disagreements and trade-offs between priorities are prerequisites for a new relationship.

African publics have the most varied views about external partners. In a recent Afrobarometer poll, 32 percent of Africans surveyed in 18 countries viewed the United States as a model, 23 percent admired China’s system, and only 11 percent sought to emulate a former colonial power.23

It may not be possible to reconcile these different agendas, but understanding and acknowledging these disagreements and trade-offs between priorities are prerequisites for a new relationship.

Since the era of African independence, most regional leaders have been nimble in their positions toward international partners, navigating their personal and political goals, the demands of their citizens, and the realities of international affairs. While leaders have shown uncommon piques of anger during the past year, most have shifted in rhetoric rather than in substance. The pandemic’s crushing blow to their economies and unsettled political and security dynamics have privileged caution over catharsis.

Africa’s international partners have their own constraints, enmeshed in Covid-19 and political crises at home and predisposed to prioritize specific countries and issue sets. While President Biden has promised a change in U.S. foreign policy, the world has become more adversarial and less reflexively multilateral in approaches to sub-Saharan Africa during the past four years.

While President Biden has promised a change in U.S. foreign policy, the world has become more adversarial and less reflexively multilateral in approaches to sub-Saharan Africa during the past four years.

Even with these tensions, there is a series of practical steps to remake Africa’s post-Covid-19 relations with external partners. First, there is the easy task of treating each other with more dignity and mutual respect. External powers also should recommit to multilateralism and agree to lower the temperature of geopolitical competition. Second, there is the more difficult undertaking to dismantle preexisting barriers to economic growth, including debt and illiquidity, and ramp up investment in key sectors. Finally, African governments and their foreign counterparts will have to accept the hardest missions: confronting longstanding weaknesses in their democracies, reconsidering decades-old security partnerships, and incurring some near-term costs to address the climate change challenge.

Start with the Easy Stuff

Sub-Saharan Africa’s foreign counterparts must discard the paternalistic, holier-than-thou approach to bilateral relations. There has to be a genuine partnership, treating each other as sovereign nations. A revitalized relationship must prioritize engagement with African counterparts because there are strategic issues on the table, not just because foreign policymakers favor specific leaders or pet issues. It is also necessary for foreign governments to tackle structural racism and prejudice in their own societies before expecting ties with African counterparts to reflect genuine mutual respect.

It is time to return to multilateralism and partnerships, ditching the Trump administration’s “America First” approach and penalizing countries that work with its adversaries. If the region and its foreign partners want to rebuild following the pandemic’s devastation, it is imperative to foster collaboration and walk away from the zero-sum approach to foreign relations. President Biden has set the right tone, rejoining the WHO on day one, and his administration has an opportunity to join other foreign governments in deepening its support of the AfCFTA. It is also essential to mull how to evolve beyond the standard African summit format.


African governments and their foreign counterparts will have to accept the hardest missions: confronting longstanding weaknesses in their democracies, reconsidering decades-old security partnerships, and incurring some near-term costs to address the climate change challenge.

Sub-Saharan Africa’s external partners will have to take on more nettlesome issues and realign their investment priorities to establish more productive post-Covid-19 relationships. Specifically, there is an urgent need to address the region’s debt crisis. As Ugandan president Yoweri Museveni lectured in May 2020, the region’s “external friends, if they are friends at all, should cancel all the multilateral and bilateral loans.”46 In addition, African counterparts should pivot to focus on health, technology, and urbanization programming.

The region is in debt distress, hobbling governments’ ability to recover from the Covid-19 pandemic. The Debt Service Suspension Initiative (DSSI) program, according to Brookings Institution’s Homi Kharas and Meagan Dooley, “falls well short” of what developing countries owe.47 If the foreign governments and the international financial institutions want to start a new relationship, they need to—as the ONE Campaign says—"rip up the rulebook." 48

Africa’s recovery from Covid-19 requires access to vaccines as well as a more comprehensive approach to the region’s communicable and noncommunicable diseases (NCDs). The pandemic also has made clear how much the region has been transformed over recent decades, requiring policymakers and investors to shift their resources toward technology and urban areas to meet current and future needs. 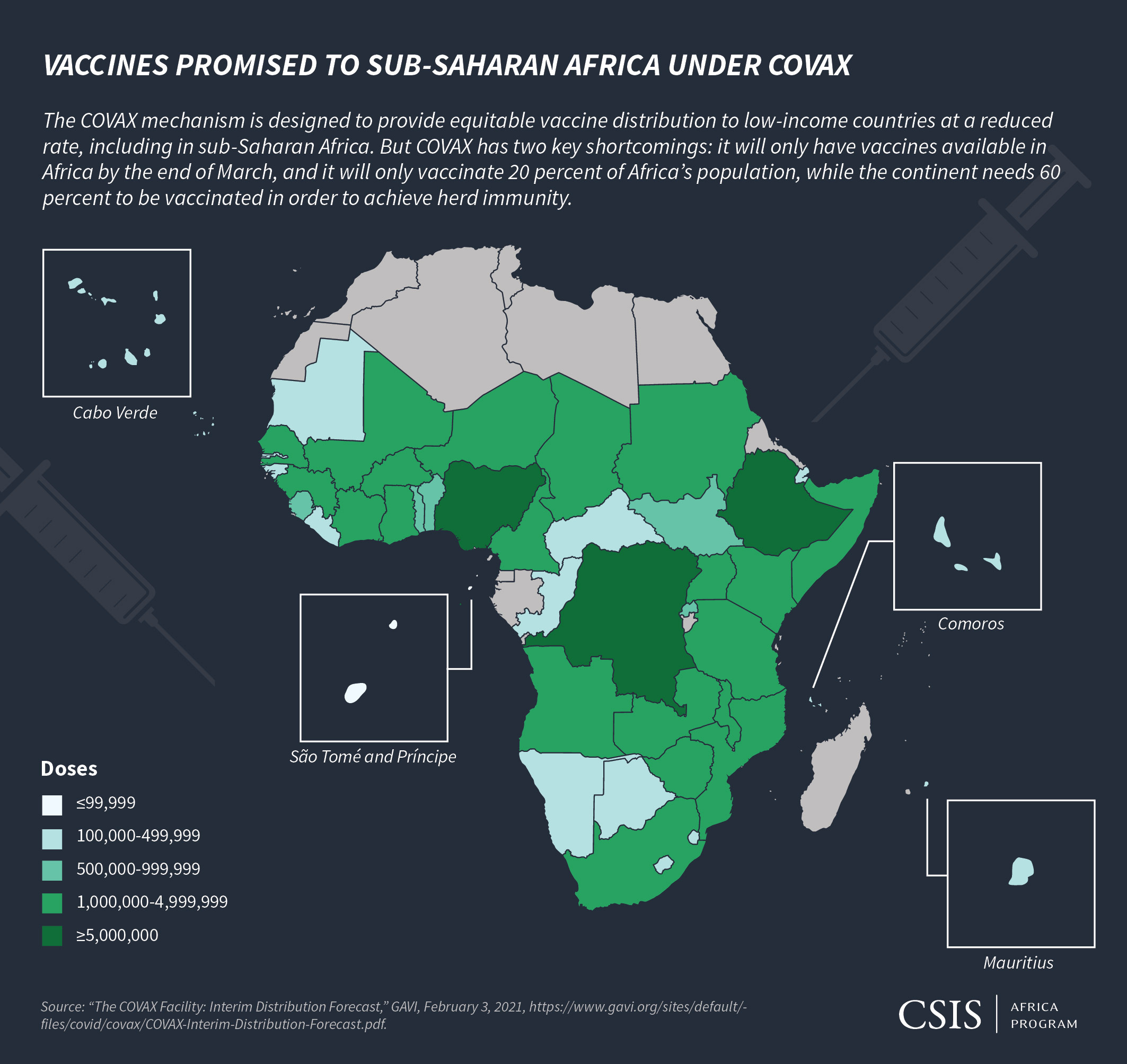 Finish with the Hardest Tasks

Sub-Saharan Africa’s external counterparts have to break with past practices, standing up for democracy and human rights even when doing so presents short-term consequences. While a values-based approach may exasperate current leaders and complicate some national security goals, expediency serves neither the interests of African citizens nor the long-term goals of Africa’s foreign partners. In addition, everyone must make sacrifices and incur short-term economic losses to address climate change.

While democracy is in short supply in the region, there is high demand for inclusive and accountable government. This partly explains the dramatic uptick in protests; sub-Saharan Africa saw the largest increases in antigovernment demonstrations in the world, with annual protests increasing by 23.8 percent each year between 2009 and 2019—more than twice the global average of 11.5 percent.61 It led to the downfall of authoritarian governments in Burkina Faso, Ethiopia, and Sudan. This groundswell affirms that Africa’s foreign partners should stop turning a blind eye and bankrolling autocrats they see as security and counterterrorism partners.

The security challenges across the region have resulted in untold tragedies and loss of human life. Africa’s foreign partners, however, have either too often stuck with the same course of action or precipitously withdrawn security presence, as was the case in Somalia under President Trump. In January 2020, Senegalese president Macky Sall warned that “it would be a mistake, and it would be very misunderstood by Africans . . . because instead of coming to help, you wish to remove the little help there is.”63 It is imperative to rethink the key assumptions underpinning current strategies and reassess close partnership with abusive and antidemocratic governments that seek to trade on their reputations as committed counterterrorism forces.


Sub-Saharan African governments are unnerved by the impacts of climate change on their economies and livelihoods, as well as its potential to contribute to insecurity. While African countries are some of the most vulnerable to impacts of extreme weather, they are among the least prepared and will require external assistance to adapt to this existential challenge.67

Judd Devermont is director of the Africa Program at the Center for Strategic and International Studies (CSIS) in Washington, D.C.

This brief is made possible with generous support from the Embassy of Japan.