Alberto Fernández and the Pandemic: From Co-president of Half of Argentines to President of All

The most forceful response to the Covid-19 pandemic in the Americas has occurred in Argentina. And in a level of national unity almost never seen outside of when the Argentine national soccer team is playing, virtually all Argentines support President Alberto Fernández’s efforts to protect Argentina from the virus.

The 2019 Election of President Alberto Fernández

In May 2019, former President Cristina Fernández de Kirchner handpicked Alberto Fernández to be the candidate of her Frente de Todos (FDT) alliance, as well as herself as its vice-presidential candidate. When Alberto Fernández finally competed head-to-head against then-President Mauricio Macri on October 27, 2019, he only won 48 percent of the vote, 6 percent ahead of Macri.

After an extremely polarizing election season, Fernández was considered by a substantial portion of the population to be the president of only half of Argentines, with virtually all of those who voted for his presidential rivals having a negative opinion of him. To top it off, his leadership was viewed as compromised by the shadow of Cristina Fernández de Kirchner.

Honeymoon, Economic Crisis, and the Arrival of the Pandemic

Until the arrival of Covid-19, Fernández spent his first three months in office grappling with the country’s severe economic crisis, which featured an unsustainable debt burden, a 50 percent inflation rate, anemic economic growth, and high unemployment.

On March 20, Fernández implemented a sweeping quarantine in response to Covid-19, presently extended until April 26. The measures confined Argentines to home except to make absolutely necessary trips to purchase food and medicine or to work in essential industries, with the definition of “essential” much more narrowly defined than in the United States. 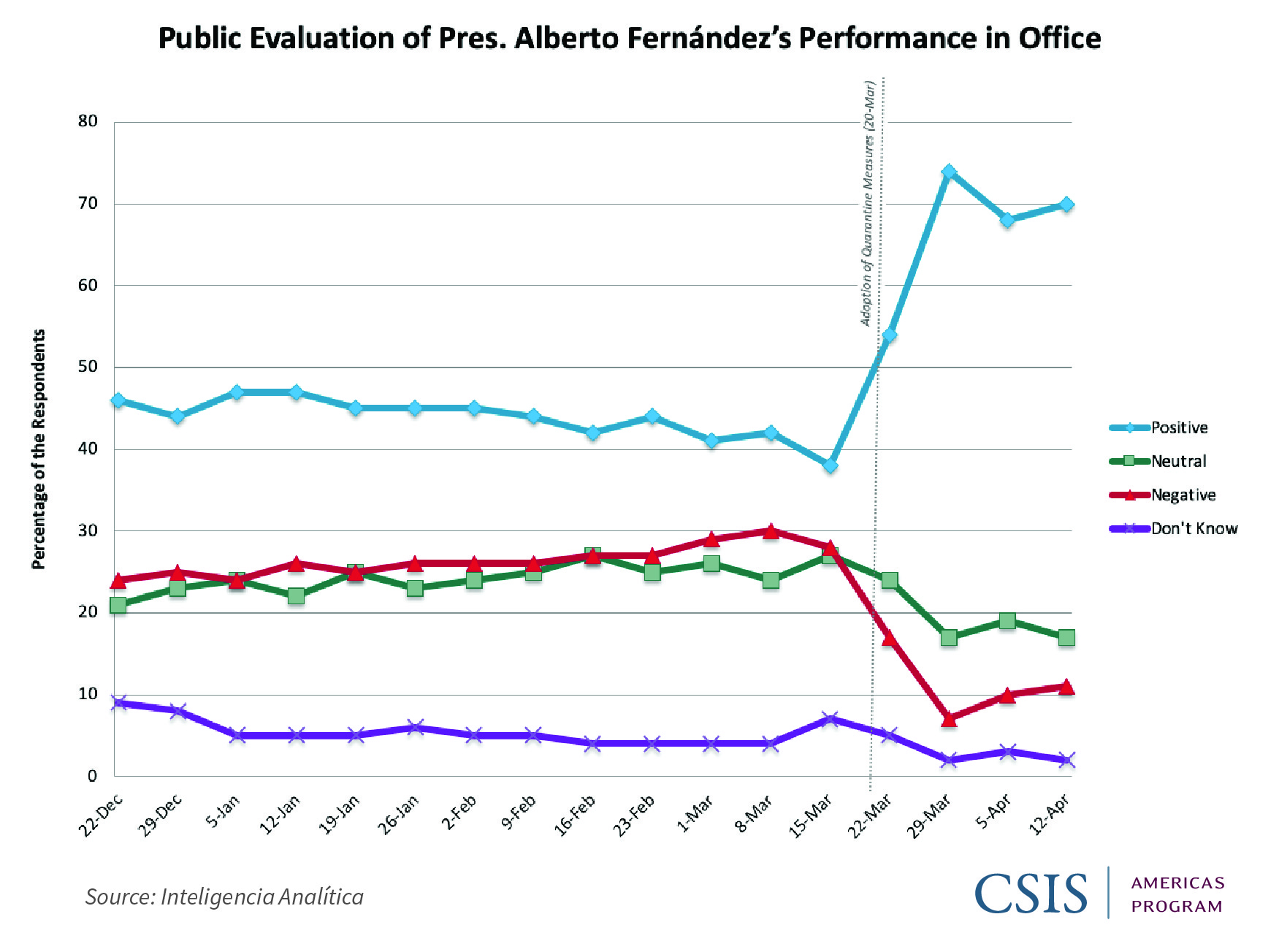 Fernández owes his high approval rating to his decisive and effective response to Covid-19. In spite of the severe limits placed on citizen mobility along with the adverse short-term economic impact of the government’s policies, an overwhelming majority of Argentines are strongly supportive of Fernández’s response.

Nine out of ten (91 percent) Argentines support the measures Fernández has adopted to confront the pandemic, with more than 69 percent totally in support and 22 percent largely in support. In contrast, only 2 percent are in total disagreement.

The dramatic positive shift in President Fernández’s approval rating is a testament to his will and ability to transform himself in this time of profound crisis from a partisan head of government to a unifying head of state. In doing so, he stands in sharp in contrast to his presidential colleagues in Brazil (Jair Bolsonaro), Mexico (Andrés Manuel López Obrador), and the United States (Donald Trump), who have proven unable to pivot from the role of a divisive and partisan head of government to the role of a unifying head of state. In presidential systems, these two positions are occupied by the president, in contrast to parliamentary systems, where two distinct individuals serve as head of government and head of state, such as Prime Minister Boris Johnson and Queen Elizabeth in the United Kingdom.

That said, Fernández’s boost in support has come largely from members of Argentina’s middle and upper-middle class, who largely voted for Macri. And just as they rapidly changed their opinion of Fernández from negative to positive due to his successful handling of the Covid-19 crisis to date, they could rapidly return to their formerly negative position if Fernández’s Covid-19 cure pushes Argentina into a deep recession rife with social conflict and economic misery.

The Economic Challenges Ahead

And before Fernández can begin to think about economic recovery, he will need to resolve the internal conflict in his FDT governing alliance, of which he is not yet the undisputed leader. For Fernández to have any realistic hope of putting Argentina back on the path toward sustained economic growth and prosperity, he first will have to put his FDT house in order.

Even when Covid-19 was seen as an isolated public health problem in China, Argentines’ expectations for the country’s economic future were not good. At the start of the new year, only 35 percent of Argentines expected the country to be better off economically in six months, versus 28 percent who expected it to be worse off (the remainder thought it would be the same or did not know). As of the second week of April, these proportions had flipped, with 39 percent now expecting Argentina to be worse off in six months and an even more meager 22 percent believing the country will be better off.

Underneath the broad support for Fernández’s Covid-19 measures is a growing anxiety about the future. Across the country, 85 percent of Argentines are worried about what could happen to their job after the quarantine ends, with a large majority (59 percent) very worried.

Extending the above to the specific worry of job loss, among residents of metropolitan Buenos Aires, where more than one-third of the Argentine population resides, two-thirds (68 percent) are either very worried (38 percent) or worried (30 percent) about losing their job as a result of the current quarantine. Furthermore, 86 percent are worried about how the quarantine has reduced their personal income, with more than 52 percent very worried.

The clock is thus ticking on Fernández’s ability to maintain Argentines under strict quarantine. This is especially the case in the Buenos Aires metro area, where 25 percent of the population does not have enough food or money at home to last more than two days and another 28 percent only has enough to last three days. While the government distribution of food aid (“bags of food”) addresses some of this need, soon more and more of these individuals will feel pressure to leave home to work in order to feed their families.

Amid the Covid-19 pandemic, President Alberto Fernández’s decisive and skillful leadership has earned him the admiration and respect of an overwhelming majority of Argentines, including scores who voted for his rivals a mere five months ago. Fernández has unified Argentines behind a single national cause like no other leader in recent memory and has the incipient potential to be remembered as one of Argentina’s great leaders.

However, before even beginning to think about entering Argentina’s pantheon, Fernández will need to vanquish the threat of Covid-19, become the undisputed leader of his FDT alliance, and successfully jump-start the economy to save the jobs of those who still have them and create new opportunities so others will be able to find new ones. These are formidable challenges, to say the least, but at least to date, Fernández has proven himself to be better able to confront the Covid-19 challenge then Presidents Bolsonaro, López Obrador, and Trump. While his odds of success are long, they are not impossible.

Mark P. Jones is a senior associate (non-resident) with the Americas Program at the Center for Strategic and International Studies in Washington, D.C. Sebastián Galmarini is a professor at the Universidad de Buenos Aires.

The authors are grateful to Marcelo Escolar, director of Inteligencia Analítica, for providing the data employed here.