The United States and China have always had a complicated relationship when it comes to liquefied natural gas (LNG). But after several false starts, and a few twists, the United States is now China’s second-largest LNG supplier, and several Chinese companies have signed up to buy U.S. LNG on a long-term basis. This is a major turn. And it is a sign that the commercial logic tying these two geopolitical rivals together is strong and will persist alongside and, sometimes, despite of their broader political animosity.

History of a Complicated Relationship

The early signs were that the United States and China would trade LNG. In November 2010, a Chinese company (ENN) was among the first to sign up to buy LNG on a long-term basis from a U.S. export project. But that deal was never finalized and none came to succeed it until February 2018. In the intervening years, Chinese companies signed long-term contracts to purchase LNG from every conceivable supplier—but not the United States.

It is unclear why Chinese companies avoided the United States. Maybe they attached a risk premium to U.S. supply that others did not. Maybe they wanted a clearer signal from Beijing to proceed. Or maybe the Chinese government wanted a clear signal from Washington that such deals would be allowed (Washington would counter that such a message was delivered). Either way, eight LNG projects have come online or are under construction in the United States, but very little of that capacity has had any Chinese buyers, investors, or financiers.

Even in the absence of long-term agreements between U.S. sellers and Chinese buyers, China imported U.S. LNG through intermediaries or from the short-term market. In 2016, over 9 percent of U.S. LNG went to China, and China ranked third among U.S. customers. China retained this position in 2017, receiving almost 15 percent of U.S. LNG exports. Then, as part of an escalating trade war with the United States, China imposed tariffs on U.S. LNG—at the rate of 10 percent in September 2018 and then 25 percent in June 2019. Soon enough, U.S. LNG exports fell to zero.

Despite the escalation in tension, there were a number of initiatives to strengthen ties. In November 2017, the state of Alaska and the Alaska Gasline Development Corporation signed a preliminary agreement with Sinopec and others to participate in the Alaska LNG project (that agreement expired). In February 2018, the first long-term contract between a Chinese company (CNPC) and a U.S. LNG supplier (Cheniere Energy) was finally executed. And in April 2019, a deal for a Chinese company (ENN) to take over an existing LNG contract from a U.S. LNG project (Freeport) fell through, reportedly because approval for the transaction was not granted in time by the U.S. government.

A more decisive turning point came in February 2020 when the Chinese government issued tariff waivers for a number of products, including LNG, as part of an agreement with the Trump administration to de-escalate the trade war between the two countries. Slowly, U.S. LNG started going to China again. These volumes grew with time, and so far in 2021, the United States has emerged as China’s second-largest LNG supplier, surpassing Qatar and Malaysia and trailing only Australia. This represents a major shift at a time when trade tensions remain high. Nominally, these waivers were part of the trade deal between the United States and China; but in practice, the massive increase in flows is easier to explain given China’s thirst for LNG. 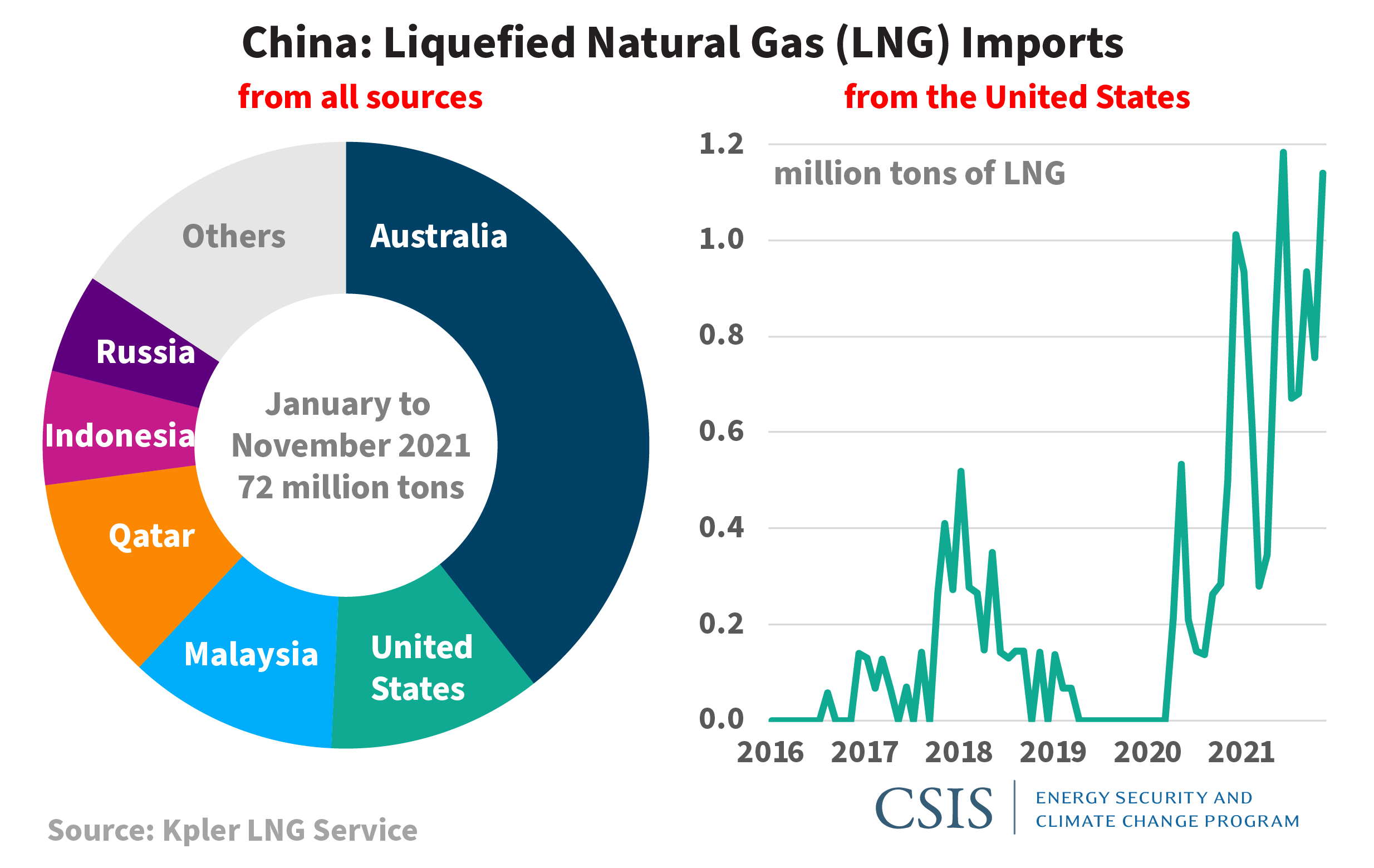 At the same time, Chinese companies are finally signing long-term deals to buy U.S. LNG. In October and November 2021, four such deals were executed with a diverse set of buyers: ENN, Sinopec, Sinochem, and Foran Energy. After years of avoiding a commitment to buy U.S. LNG, Chinese companies have finally made their move. And they have done so without a relaxation in tensions or a political deal between Washington and Beijing, at least not a public one or anything beyond the trade truce that was negotiated in early 2020. That too is significant, making a turning point in the relationship between China and the United States.

This growing trade is a reminder of the power of supply and demand. Politics can lubricate a commercial relationship and it can sure stop one. But energy can overcome serious political obstacles when the commercial logic is strong—a fact that applies just as well to hydrocarbons as it does to solar, batteries, and other low-carbon products. China and the United States may be geopolitical rivals, but they are tied to each other in energy terms: China is importing fossil fuels from the United States, and the United States is importing low-carbon energy technologies from China. Managing these flows amid rising tensions is a major challenge for both countries.

The growth in trade is also a testament to China’s appetite for LNG. China’s demand for LNG is set to grow sharply in 2021, one of the highest growth levels ever. In September 2021, the Chinese government reportedly told Chinese companies to secure as much LNG as they can no matter the price. The urgency to secure energy seems to have overridden whatever squeamishness the Chinese may have in buying U.S. LNG. A country this hungry for energy has only limited luxury to pick its suppliers.

For Beijing, the reliance on the United States and Australia for half of its LNG imports must be uncomfortable, especially when tensions with both countries are high (of course, China is a major gas producer and pipeline importer too; LNG supplied 28 percent of the country’s gas in 2020). This possible dependence on Australia and the United States has been a long time coming. Still, its arrival is an ominous sign for Beijing as its thirst for a cleaner fuel must be accompanied by a dependence on countries it sees as rivals.

For the United States, this new chapter presents opportunities: a number of U.S. LNG projects are looking to start construction over the next few years, and strong demand from the world’s largest LNG market can only help them to the finish line. More generally, as U.S. competitors like Qatar and Russia have stepped up in LNG, these deals are a reminder that U.S. LNG can compete on equal footing.

At the same time, the president has set a target to reduce U.S. greenhouse gas emissions by 2030, which requires a reduction in emissions from gas. How will the United States reconcile these competing pressures—to reduce emissions from hydrocarbons at home while responding to the market pull for U.S. commodities overseas? China’s arrival as a U.S. LNG buyer shows that the answer to that question will depend not only on Washington, or even Houston, but on the pace and trajectory of the energy transition elsewhere. And on that count, it seems the demand for LNG in general and U.S. LNG, in particular, remains strong—and just got a big boost.