In 2019, the CSIS Korea Chair celebrates its tenth anniversary as the premier independent platform in Washington for the advancement of major policy issues of common importance to the people of the Republic of Korea and the United States. Korea occupies a central place in U.S. strategy in Asia and plays a critical role in shaping peace and stability in the world's most prosperous and growing region.

Through nonpartisan, expert analysis of ongoing policy opportunities and security challenges facing the region, the CSIS Korea Chair promotes a greater understanding of relations between the United States, Korea, and Asia.

To celebrate its tenth anniversary, the Korea Chair will engage in new, cutting edge projects that will push the bounds of policy research on Korea, including satellite imagery, microsurveys, and big data/predictive analytics.

Sinpo Update: No Significant Developments
Based on recent satellite imagery of Sinpo South Shipyard reviewed by Joe Bermudez and Victor Cha, there is no evidence that the “newly built submarine” inspected by Kim Jong-un on July 23, 2019 has been launched.

The 66-year alliance between the U.S. and South Korea is in deep trouble
In a Korea Chair Platform, CSIS Trustee Richard Armitage and CSIS Senior Advisor and Korea Chair Victor Cha discusses the troubles the U.S.-ROK alliance face.

On Monday, September 30, 2019, we hosted the 9th annual JoongAng Ilbo-CSIS Forum at CSIS, which brought together renowned scholars, experts and officials to talk about peace and denuclearization, seeking solutions to the Korea-Japan conflict, and U.S.-China relations.

Our keynote speaker was Ambassador John Bolton, the National Security Advisor to President Donald Trump from 2018 to 2019.

Closing Keynote Address by The Honorable John C. Rood, the Undersecretary of Defense for Policy 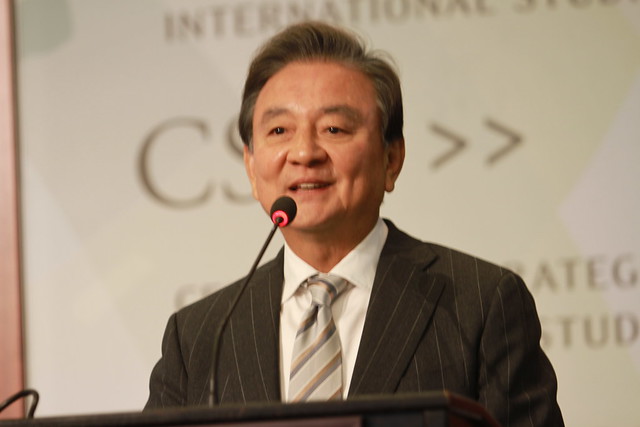 North Korea’s Strong Hand Against the U.S.
In this Korea Chair Platform, Dr. Sue Mi Terry, Senior Fellow at the Korea Chair, argued that Kim Jong-un has been negotiating with the United States from a position of strength, and that he ultimately has no intention of denuclearizing North Korea.

Collateral Damage: What U.S.-China Competition Means for Korea
CSIS Korea Chair Dr. Victor Cha explores the impact of U.S.-China competition for South Korea, and explain why caught between its security patron and its giant neighbor, South Koreans increasingly will be forced to choose between the two, and in ways that are detrimental to the longstanding U.S.-ROK alliance. While South Korea’s preferred position has always been to hedge between the U.S. and China, choosing one or the other now is difficult is difficult because of three dilemmas that South Korea face.

North Korea Fine Tunes its Sea-Based Ballistic Missile Capabilities
On October 2, 2019, North Korea tested what may have been a submarine launched ballistic missile (SLBM) from waters northeast of the Wonsan, Kangwon Province area into the sea between Korea and Japan. CSIS Joseph Bermudez, Victor Cha and Dana Kim look at what this means for North Korea’s capabilities.

Undeclared North Korea: The Kumchon-ni Missile Operating Base
In this new Undeclared North Korea report by Joseph Bermudez and Victor Cha, CSIS Beyond Parallel looks at the Kumchon-ni missile operating base. This is the first comprehensive public report detailing the development, organization, and threat posed by the Kumchon-ni base, which is tasked with not only strikes against the southern half of Japan, but is also capable of striking all of South Korea, and houses a battalion- or regiment-sized unit equipped with Hwasong-9 (Scud-ER) medium-range ballistic missiles (MRBM).

On August 28, CSIS Korea Chair and Japan Chair co-hosted The Honorable Randall Schriver, the Assistant Secretary of Defense for Indo-Pacific Security Affairs at the U.S. Department of Defense for an importance discussion on the importance of U.S.-Japan-Korea trilateral defense cooperation, moderated by Dr. Victor Cha.

CSIS on the Japan-Korea Crisis

The Japan-Korea crisis is important to regional relations in Asia and for the United States. Read what CSIS experts  Dr. Victor Cha, Dr. Katrin Katz, Mr. Matthew Goodman and others has to say about this critical issue.

On July 31 – August 2, we held the Seoul Program of the U.S.-Korea NextGen Scholars Program in Seoul, South Korea. At the Seoul Program, the NextGen scholars participated in a series of meetings at the Blue House, the Ministry of Foreign Affairs, the Ministry of National Defense, the Ministry of Unification, the U.S. Embassy Seoul and the Institute for National Security Strategy to discuss U.S.-ROK relations, U.S.-DPRK relations, inter-Korea relations, and ROK-Japan relations. The scholars also had the opportunity to meet with the NextGen senior advisors in Korea and members of the business and media communities to discuss their work. They also visited the new Chey Institute for Advanced Studies to learn about their initiatives. Lastly, the scholars spoke at about their research to professors and students at public events held at Korea University and Seoul National University. 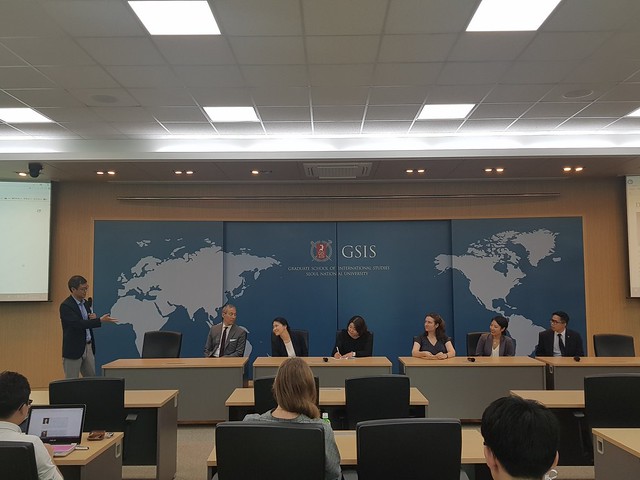 As the Kim-Trump meeting at the DMZ last week suggests a reset in the denuclearization diplomacy after the failed summit in Hanoi, the United States must fashion a new negotiation strategy.  Here, Victor Cha of CSIS and Congressman Ami Bera (D-CA) offer some ideas for a strategy going forward (originally published in Chosun Ilbo, 2 June 2019).

Trump, North Korea, and the Rush for Peace

In the May/June 2019 edition of The National Interest, Dr. Victor Cha wrote about the South Korean government’s rush for a peace declaration with North Korea, the status of the U.S.-DPRK relations and the likelihood of a denuclearization agreement.


U.S. Policy Toward North Korea After the Second Summit

Victor Cha, senior adviser and Korea Chair for CSIS, testified before the Senate Committee on Foreign Relations Subcommittee On East Asia, The Pacific, And International Cybersecurity Policy on “U.S. Policy Toward North Korea After the Second Summit” on March 26, 2019.

CSIS Joe Bermudez and Victor Cha looked at satellite imagery acquired on March 21, 2019 and over the past six months and found that the No. 17 Explosives Factory near Hamhung, North Korea is active. The No. 17 factory is important because it is one of the primary, if not the primary, producer of large solid-propellant rocket motors for ballistic missiles such as the Pukguksong-1 and-2. 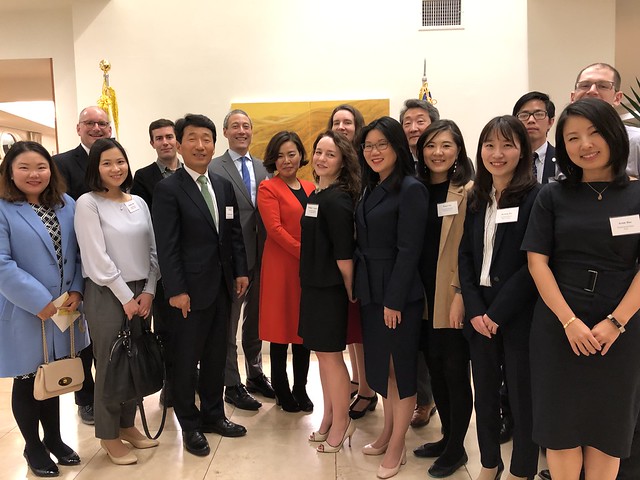 As part of the U.S.-Korea NextGen Scholars program, our eleven scholars will publish an op-ed as part of the program. These op-eds were workshopped at the Los Angeles Program, with feedback provided by the program chairs and the Senior Advisory Board throughout the program.

In this article, Dr. Katz argues that conflicts between South Korea and Japan plays into the hands of North Korea and China, and while U.S.’ mediation this time around may not reap immediate success, the costs of complacency are certain.

Stephanie Kim, “The US admissions scandal shows that perceptions of opportunity are narrowing,” Times Higher Education, March 28, 2019.
In this article, Dr. Kim argues that if Americans lose faith in alternative routes to success, entry to top universities could become as cut-throat as it is in South Korea.


Benjamin Young, “Why the Second Summit Between Donald Trump and Kim Jong Un Failed,”  History News Network, April 7, 2019. In this article, Dr. Young explains why the Hanoi Summit was a failure whilst urging that the autocratic nature of the Kim regime and human rights issues not to be forgotten, despite the friendlier atmosphere of the U.S. – North Korea relations today.

A new CSIS Beyond Parallel snapshot on March 19 by Joe Bermudez and Victor Cha finds no activity of significance at the vertical engine test stand or launch pad at the Sohae Satellite Launch Facility.

In the third of our series “Undeclared North Korea” looking at the approximately 20 undeclared missile bases by North Korea, CSIS Joseph Bermudez, Victor Cha and Lisa Collins looked in depth at the Sangnam-ni missile operating base in Hochon County in South Hamgyong province, North Korea. Sangnam-ni is an operational missile base that houses a battalion- or regiment-sized unit equipped with Hwasong-10 (Musudan) intermediate-range ballistic missiles (IRBM).

In the run-up to a second Trump-Kim summit, South Korean diplomatic sources reported on Monday (January 28th) “Seoul and Washington last week confirmed that Pyongyang will scrap its Tongchang-ri [Sohae] missile engine test site and launch pad in the presence of international experts.” As of January 20, 2019, commercial satellite imagery of the Sohae Satellite Launch Facility shows that no new dismantling activity has occurred at the vertical engine test stand or rail-mounted processing building since August 2018. CSIS Victor Cha and Joe Bermudez explored in this snapshot what the latest satellite imagery tells us about the potential dismantlement at Sohae.

Though the subject of speculation by open-source researchers for years, new research undertaken by CSIS Beyond Parallel has located 13 of an estimated 20 North Korean missile operating bases that are undeclared by the government. In the 2nd report of our series on these bases, Korea Chair’s Joseph Bermudez, Victor Cha and Lisa Collins explored the Sino-ri Missile Operating Base, which is located 212 kilometers north of the DMZ and houses a regiment-sized unit equipped with Nodong-1 medium-range ballistic missiles in depth.

Dr. Victor Cha appeared on PBS Newshour on January 1, 2019 with Amna Nawaz and Jenny Town to analyze Kim Jong-un’s New Year address. The segment was viewed by U.S. president Donald Trump, who tweeted after the show.

With the December 26 groundbreaking ceremony at the Panmun station on the east side of the Kaesong Industrial Complex, North and South Korea are moving forward with inter-Korean railway cooperation as a key engine for advancing inter-Korean reconciliation and building the infrastructure for eventual unification. Railway re-connection would allow the Korean peninsula to be integrated into a rail network spanning the Eurasian continent through China and Russia. This report is the second in a series of CSIS original reports by Victor Cha, Joseph Bermudez and Marie DuMond on the inter-Korean and Korea-Eurasian railway connections including analysis, satellite imagery, and an overview of technical specifications.

Though the subject of speculation by open-source researchers for years, new research was undertaken by CSIS Beyond Parallel has located 13 of an estimated 20 North Korean missile operating bases that are undeclared by the government. Missile operating bases are not launch facilities. In this new report, Korea Chair’s Joseph Bermudez, Victor Cha and Lisa Collins explored one such missile base in depth, the Sakkanmol Missile Operating Base, one of the closest to the DMZ and Seoul.

The Markets: Private Economy and Capitalism in North Korea?

The growth of markets is the single most significant socioeconomic development to occur in North Korea over the last 20 years. An understanding of this change is critical for the formulation of North Korea policy, but the underlying issues have been relatively understudied in comparison to North Korea’s nuclear weapons program and prospects for denuclearization. In 2017 and 2018, Beyond Parallel launched a pioneering and original data collection project on markets in North Korea to study the changes happening in the country. As featured in “North Korea’s ‘Money Masters’ Hold Keys to Kim’s Economic Revival” by Jonathan Cheng in the Wall Street Journal.

On Monday, October 29 from 2:00pm to 4:00pm, the CSIS Commission on Strengthening America's Health Security hosted a screening of its new film, The Gathering Health Storm Inside North Korea, followed by a roundtable discussion with regional experts and providers of humanitarian assistance moderated by film co-director J. Stephen Morrison. Dr. Victor Cha and Dr. Sue Mi Terry both participated in the new film and in the film screening at CSIS.

A View Inside North Korea

Since 2016, CSIS has partnered with an organization that has a successful track record of conducting discrete and careful surveys in North Korea. Beyond Parallel has commissioned this organization to administer micro-survey questionnaires in provinces across North Korea. The questionnaires are carried out as natural in-person conversations between those conducting the interviews and the respondents. The individuals administering the questions are carefully trained to avoid asking leading questions or eliciting specific answers so as to protect both the integrity of the interview project and as well as safety of the people involved in the conversation. Explore the results and related commentaries by visiting the project page.

A Team of Their Own
By H. Andrew Schwartz, Victor Cha
In The Impossible State
December 16, 2019
On Demand Event