Every year, the Director of National Intelligence issues a global annual threat analysis as part of their testimony to Congress, providing a Worldwide Threat Assessment of the U.S. Intelligence Community. This year, Director Daniel R. Coats followed up his testimony by issuing a formal statement for the record on March 6, 2018.

As might be expected, he raised threats like China, Russia, Iran and North Korea. However, Director Coats also focused on drug poisoning and deaths as a critical new threat to the U.S. His statement warned that,

Americans in 2016 died in record numbers from drug overdoses, 21 percent more than in 2015...Worldwide production of cocaine, heroin, and methamphetamine is at record levels. US mortality from potent synthetic opioids doubled in 2016, and synthetic opioids have become a key cause of US drug deaths...Mexican criminal groups will continue to supply much of the heroin, methamphetamine, cocaine, and marijuana that cross the US-Mexico border, while China-based suppliers ship fentanyls and fentanyl precursors to Mexico- Canada-, and US-based distributors or sell directly to consumers via the Internet.

To illustrate his points, Coats also included a striking graph on the major causes of premature death in the United States shown in Figure One. To show trends based on hard data, he covered the period from 1999 to 2016. He also focused on the four leading causes.

The trends by cause show very clearly why he focused on the threat from drug deaths:

The American Death Rate from Terrorism

Director Coats did not ignore the threat from terrorism. His statement made this clear:

At the same time, it is interesting to note just how low a threat terrorism has been in terms of its casualties over the same period. If Director Coats had attempted to include the number of deaths in the U.S. since 1998, they would have been so low that the only time they would have made even a slight visible impact on the graph would have been during "9/11,"and the attacks on the World Trade Center and the Pentagon in 2001.

Figure Two shows the number of U.S. deaths from terrorism using the START data base – which is the unclassified data base issued by the National Consortium for the Study of Terrorism and Responses to Terrorism maintained by the Homeland Security Department of the University of Maryland. The U.S. government Counter Terrorism Center no longer attempts to provide public estimates of the trends in terrorism but START is the data base the State Department uses in its annual country reports on terrorism.

There is no way to count the number of serious accidents, wounds, and major survivable medical problems from drug use and compare them directly with the impact of wounds from terrorist attacks. It is clear, however, that the ratio of serious violent attacks, crash wounds, suicide wounds, and drug-related medical problems to deaths is far greater in all four cases than the non-fatal wounds from terrorism.

It is tempting to preface the number of deaths from terrorism with the world "only" when comparing them to the other major sources of premature deaths. This is unfair and unrealistic for several reasons. Every death matters. Terrorism relies on fear and its political effects, not casualty numbers, for its effectiveness. And, the figures mighty be far, far higher if it were not for the massive counterterrorism efforts the U.S. has made inside and outside the United States since "9/11."

At the same time, it is striking that the United State government no longer even attempts to track the global trends in terrorism and does not make public any estimates of the relative effectiveness of its counterterrorism efforts. Somewhat surprisingly, it has also ceased to make any estimates of the cost of such efforts.

Neither any Administration or part of Congress has ever published an official estimate of the cost of the U.S. wars on terrorism – which now approach 17 years in the case of Afghanistan and 15 years in the case of Iraq – or of its other counterterrorism activities overseas. It is clear, however, that the wars in Afghanistan and Iraq/Syria have been fought largely as wars on terrorism as have U.S. military actions in Africa, the Philippines and other parts of the world total at least two trillion dollars since "9/11," and some estimates put the cost as high as $4 to $6 trillion.[i] President Trump's FY2019 request for only the war fighting part of the cost of Overseas Contingency Outlays –which does not include many actual warfighting costs– was some $62 billion.

Even if one ignores the massive cost of America's "long wars" overseas, even the most limited estimate of the cost of the fight against terrorism is remarkably high. The OMB did publish a very rough partial estimate of the cost of homeland security through FY2017 as part of its annual Analytic Perspectives on each Federal budget request. However, it ceased to do so when President Trump came to office.

The last such report for FY2017 had many major gaps – and never linked the trillions of dollars spent on wars and other counterterrorism efforts overseas to the domestic effort. It did, however, show that even a limited amount of the Federal effort had a very high cost relative to the effort to fight drug deaths, traffic deaths, and other efforts to protect American lives.

The OMB estimated that the total domestic cost of counterterrorism efforts by the Federal departments and agencies contributing to "Homeland Security Funding" with unclassified budgets had risen from $43.5 billion in FY2015 to $50.4 billion in FY2017. This did not include state and local government costs or those of the private sector and NGOs. It does not seem to have included the cost of efforts by the U.S. intelligence community.

OMB did estimate that only part of this funding actually went to fight terrorism. The cost of the total Federal effort to "prevent and disrupt terrorist attacks." went from $35.4 billion actual in FY2015 to a request for $35.6 billion in FY2017 – a drop in the percentage going to the domestic fight against terrorism.

Interestingly enough, the Analytic Perspectives for the FY2019 Request may have ignored terrorism but did make an effort to cost federal efforts in cybersecurity for the first time. These costs rose from $5.9 billion in FY2017 to $6.2 billion in FY2018, and $6.5 billion in FY2019.

There are no meaningful estimates of the future costs of U.S. wars to fight terrorism – or even for the small portion that goes to Overseas Contingency Outlays beyond 2019. The technical estimates in the Analytic Perspectives for the FY2019 Request (Table 23-9, p. 301) project a major rise in the total cost of the Department of Homeland Security from an actual total of $50.5 billion in FY2017 to a request for $64.5 billion in FY2019 and $69.3 billion in FY2013, to $85.5 billion in FY2028. Much of this cost, however, will have nothing to do with counterterrorism, and there is no way to determine what program – if any – the Administration has for either the present or the future.

Providing a Meaningful Assessment of the U.S. Fight Against Terrorism

The U.S. has often made "transparency" a critical priority in advising other governments. It is all too clear, however, that three Administrations and the U.S. Congress have made no real attempt to measure the cost of the U.S. fight against terrorism, assess the overall trends in the threat, measure the effectiveness of U.S. efforts, or assess the extent to which such spending represents the proper priorities compared to other uses of the money. If anything, the Trump Administration and the Congress have regressed sharply on the amount of data that is provided on counterterrorism and related wars over the last few years.

This is not a partisan issue. Administrations of both parties have failed to provide even the most basic costing and assessment of total domestic counterterrorism efforts and the cost of related wars. The one open-source data base on terrorism – once maintained by the Counter Terrorism Center – was cancelled years ago.

A comparison of the premature deaths in Figure One with the deaths from Terrorism in Figure Two hardly tells the story. It is, however, a warning about a major failure to know either the cost of U.S. efforts or their value. 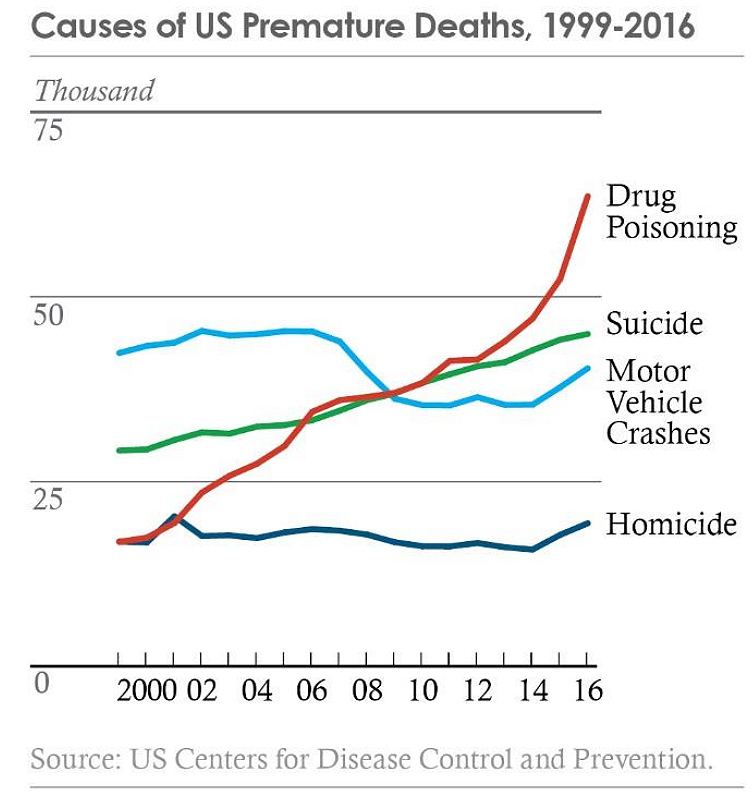 Figure Two
Comparable START Estimate of U.S. Deaths in Terrorist Attacks - Part One
At Scale of Figure One 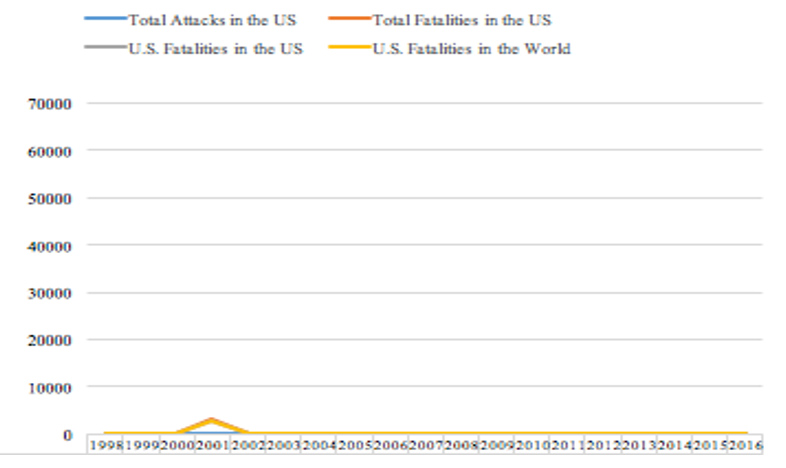 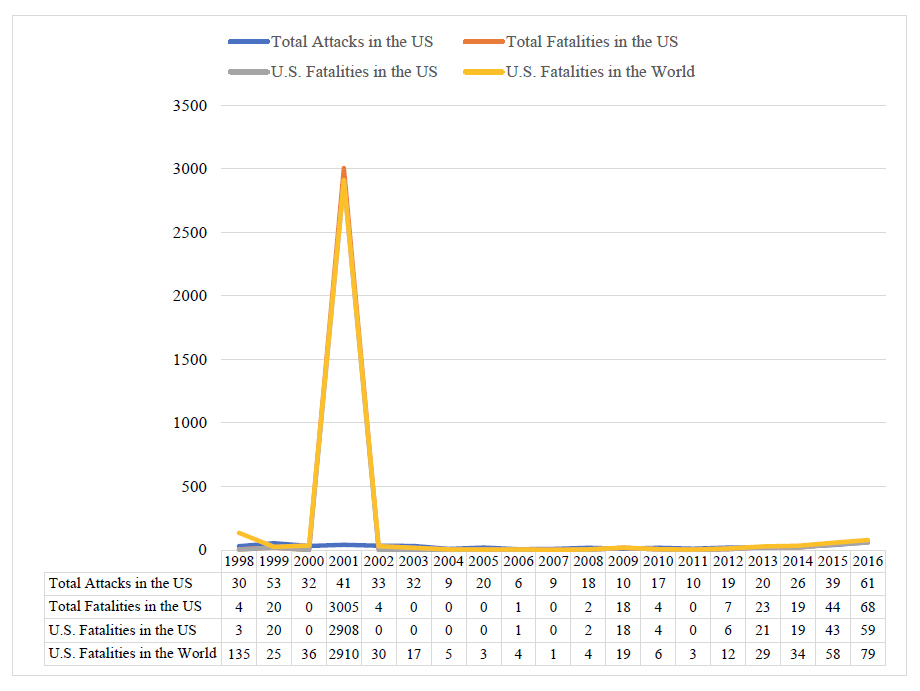 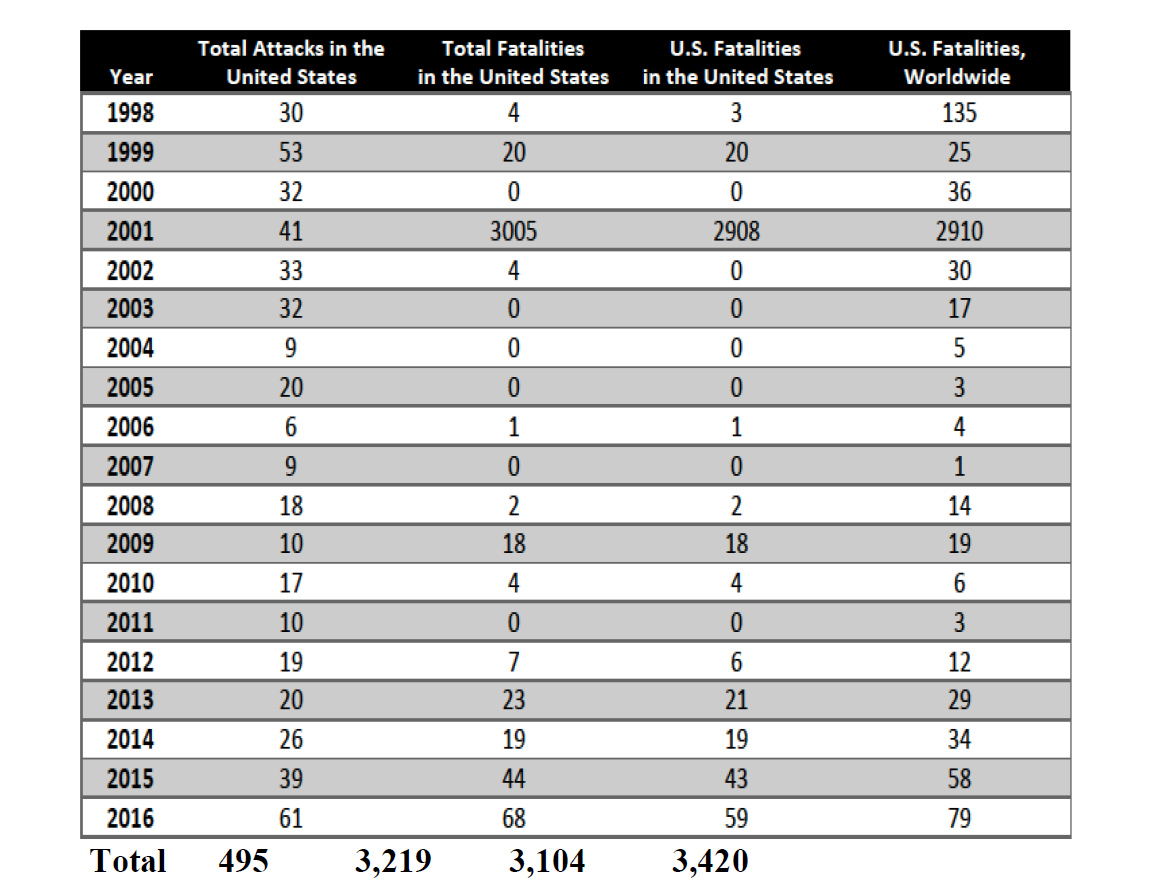 Figure Three
Comparable START Estimate of U.S. Deaths in Terrorist Attacks at Scale of Figure One 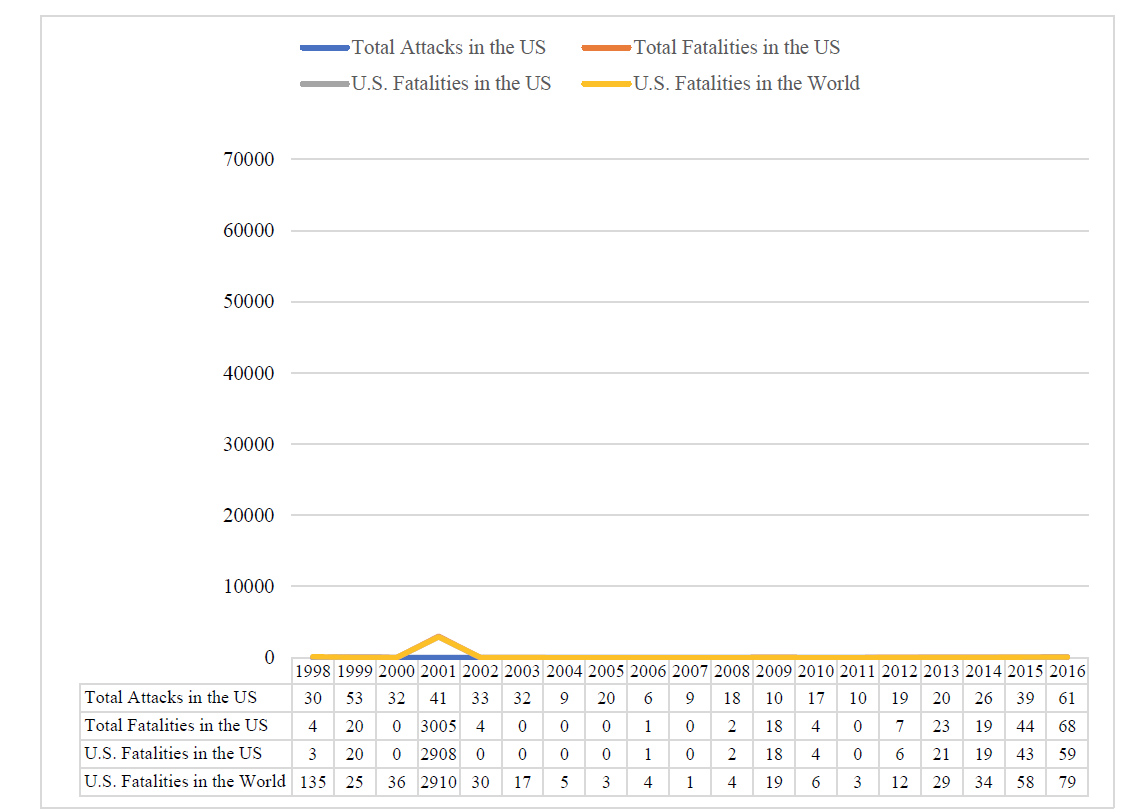