It has been over three months since the Modi government increased its majority in Parliament. Yet little has been done or said to enthuse the investor community. The opportunity to put up a fresh “India is open for business” beacon is fading; a few minor foreign direct investment (FDI) reforms announced in late September have not burnished Prime Minister Modi’s image as a reformer. Paired with the fact that foreign firms are looking for options beyond China, such an opening may not come again for some time. India is sitting on a unique opportunity to attract investment but must move with renewed urgency in enacting key reforms.

A great deal of India’s economic reforms in recent years are driven by the focused goal of moving up the World Bank’s “Doing Business” report. Indeed, India made outstanding process, moving from 142nd place in the 2015 edition of the rankings up to 77th place in the 2019 edition. But these improvements, while “real,” are also due to an unrelenting method of reforming those specific areas measured by the World Bank. For an example of what this means in practice—India’s big jump to 77th place last year was partially due to developments in the “Trading Across Borders” subcategory. India’s score jumped from 55.86 points to 77.46 points due to a range of process improvements. However, India simultaneously increased customs duties and expanded import substitution rules—policy shifts not part of the World Bank’s quantitative assessment of the business environment.

The Budget Speech delivered by Finance Minister Nirmala Sitharaman could have been a powerful vehicle for the Modi government to lay out its reform priorities. Instead, the budget seems to focus on rural development—a key driver of recent state and national elections. And the Budget Speech was far from a “call to arms” to boost the real economy, despite reference to a handful of pending foreign investment relaxations. That same month, the International Monetary Fund lowered India’s expected economic growth rate for the year by three-tenths of a percent, down to 7.0 percent. The Reserve Bank of India is even more pessimistic, now estimating expected growth of 6.9 percent this fiscal year, and additional downward revisions appear imminent.

There should be a burning urgency to enacting business reforms. As the U.S.-China trade fight deepens, multinational firms are starting to consider alternative options for manufacturing to support global supply chains. More reports are emerging of firms relocating manufacturing to Vietnam, Malaysia, Mexico, among other nations. India is sometimes referenced in such lists, though with a massive domestic market and nearby access to other large markets like Bangladesh, Myanmar, and Southeast Asia.

India faces another strong headwind in trying to win global capital flows—the fact that the United States and India have a slow-boil trade fight of their own. Both sides seem to be leaning towards “fight” instead of “fix.” Hopefully an expected visit to Washington, D.C. by new Minister of Commerce & Industry Piyush Goyal can begin to repair the damage. If this fight continues to burn, India’s attractiveness as a manufacturing base erodes.

There is still time for India to throw up a beacon to potential investors, and recommit to deep economic reform. We at CSIS have revisited our India Reforms Scorecard, crafting a new list of 30 major economic reforms to stimulate growth and job creation. It is also critical to follow the spirit of the World Bank’s “Doing Business” report, not simply the defined features. And the Modi government’s early commitment to press states to reform needs new blood, as states control many key features of the business environment such as access to electricity, most business licenses, and more. Global investors are searching for the “next big thing” and it could be India- if India were to move with anticipation and desperation. 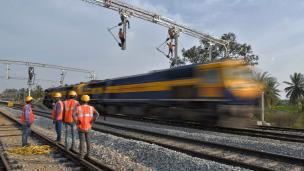 Russian weapons are creating a headache for the US as it looks for partners to counter China
Business Insider | Christopher Woody
May 11, 2021
In the News

U.S.-India Commercial Ties: In Search of Ambition
By Richard M. Rossow
February 10, 2021
View all content by this expert