In July 2020, Venezuela’s state oil company, Petroleos de Venezuela (PDVSA), spilled over 26,000 barrels of oil into the Caribbean as it attempted to reactivate its El Palito refinery that for years had been lacking proper maintenance. The oil washed ashore Morrocoy National Park, coating nine miles of beaches and damaging one of the country’s most biodiverse ecosystems, one rich in mangroves and coral reefs. Scientists commissioned by the National Assembly projected that the Morrocoy coast could take a half-century to recover. The Nicolás Maduro regime downplayed the spills, impeding offers to clean up by volunteers and environmental groups.

That same refinery produced two more spills in 2020, just a few of the over 46,000 oil and pollutant spills that have occurred in Venezuela since 2010 as the country’s state oil company operates with inadequate technical capacity and maintenance. The spills are emblematic of a much larger environmental crisis that has afflicted the country for years, damaging ecosystems and endangering local communities from the Caribbean coast to the Amazon rainforest. This environmental component has attracted little international attention with global responses focused on the country’s humanitarian crisis.

This environmental crisis illustrates how extensively Venezuela’s institutions have collapsed during the Chávez and Maduro administrations. But just as the environmental situation is inexorably linked to the country’s political crisis, so too must it play a role in an eventual solution.

Venezuela once led the region in environmental policy and conservation efforts. In the latter half of the twentieth century, Venezuela established 29 protected areas, and 70 percent of the country’s south was protected in a combination of national parks, biosphere reserves, and a UN Educational Cultural and Scientific Organization (UNESCO) World Heritage site.

Former president Hugo Chávez proclaimed a commitment to environmental justice but skirted environmental responsibilities and deepened the country’s dependence on oil. Beginning in 2011, the Ministry of Environment stopped publishing key environmental statistics ranging from water quality to wildlife endangerment, mining, and fisheries. The country’s environmental administration and law enforcement system was even further dismantled once Maduro became president in 2013. Since then, the Ministry of Environment has been restructured three times, culminating in its complete dismantling and transition into the Ministry of Ecosocialism. Notably, the Maduro regime has undermined institutional capabilities for regulating and monitoring deforestation just as informal logging becomes increasingly necessary for many Venezuelans who now rely on wood as a substitute for cooking gas. Regime officials continuously violate environmental laws with impunity, for example, by reportedly using its joint venture with a Turkish company to clandestinely sell illegally logged wood.

PDVSA’s environmental standards and technical capacity have weakened tremendously since then. As conditions inside Venezuela worsened, thousands of technically skilled oil industry workers left the country, their spots filled through political patronage. The company’s decaying infrastructure and lack of trained personnel make oil spills and other accidents frequent and contingency plans nonexistent. Ironically, though Venezuela is producing a fraction of its 2001 output, it is flaring so much gas that experts believe emissions have not been reduced correspondingly. (Exact data is difficult to find as neither PDVSA nor the Ministry of Ecosocialism generate or publish data on PDVSA’s methane and carbon dioxide emissions.)

In 2020, PDVSA and its joint venture partner reportedly abandoned a floating storage and offloading (FSO) tanker carrying 1.3 million barrels of crude oil. By the summer, with its staff reduced from 72 to 5, the FSO had tilted, and water was reportedly seeping in, raising concerns about a potential spill that would have disastrous consequences for neighboring Trinidad and Tobago and the Caribbean more broadly. Maduro’s security forces arrested a national oil workers union official for alarming the media about the tilting ship. 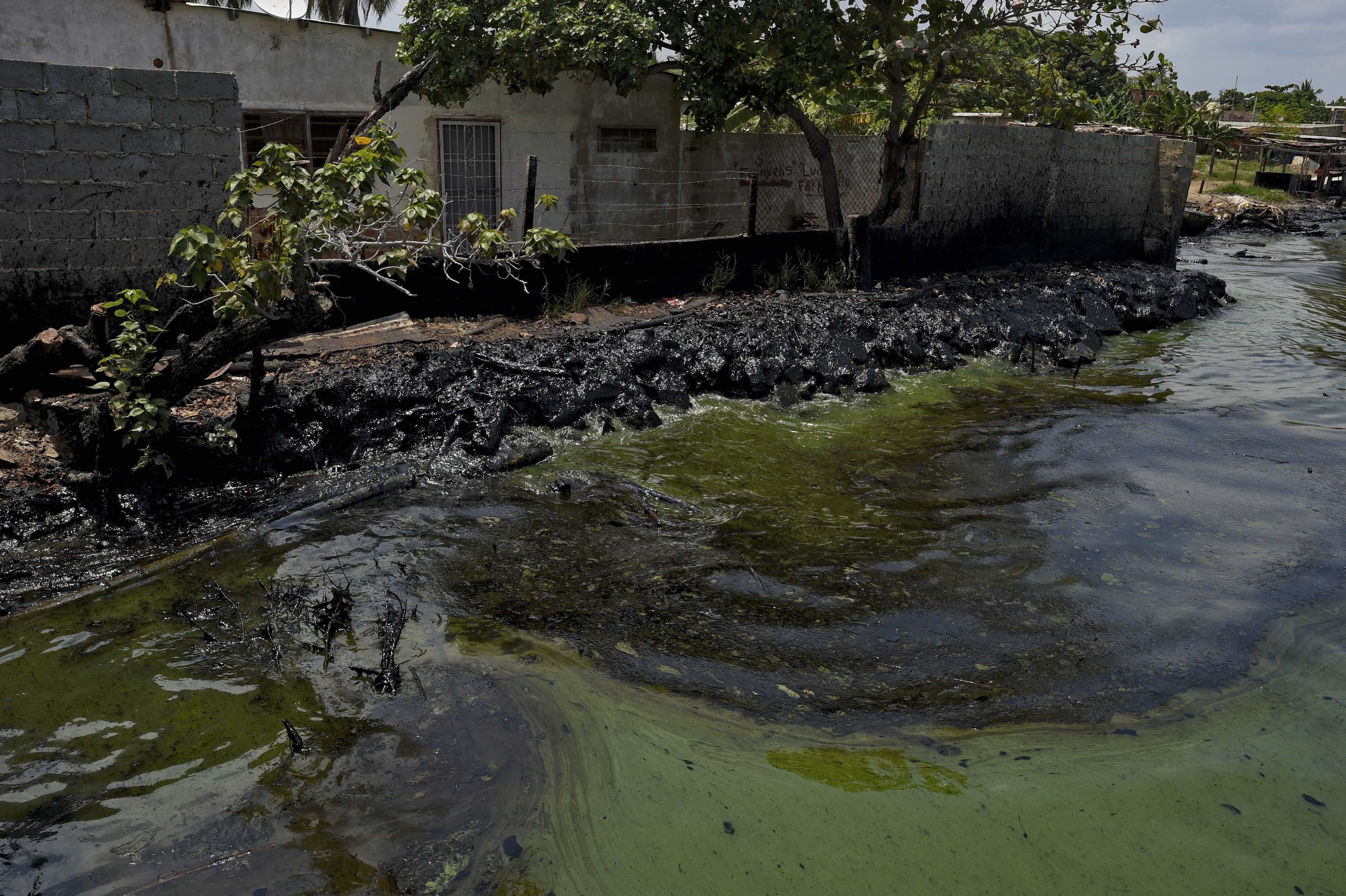 Lake Maracaibo, a longtime centerpiece of the Venezuelan crude industry, is now an emblem of the country’s decaying oil industry. From the 1930s to the 1970s, environmental protection provisions were limited, as expected during an era when environmental concerns had not yet turned into strong policy. The ecosystem was already polluted, but the situation worsened dramatically as the oil industry collapsed under Chavez’s policies. The waters are now covered by a “permanent black tide” since all measures to prevent spills have been abandoned, and many oil wells have been leaking continuously for years. The lake’s flora and fauna have been severely affected. Local fishing communities are exposed to dangerous levels of contaminated seafood and water and are increasingly unable to sell their catch, which is often coated in oil. In 2016, the opposition-controlled National Assembly passed a law intended to promote conservation in the Lake Maracaibo region, but the law was later rejected by Maduro’s rubberstamp legislature, the National Constituent Assembly.

The Mining Crisis in Southern Venezuela

Last year, CSIS published a report detailing the environmental, security, and human rights implications of illegal mining in southern Venezuela. Mining has rapidly accelerated since 2016, when the Maduro regime designated a vast swath of the country’s territory as the “Orinoco Mining Arc” without conducting any environmental impact assessments or consulting indigenous communities. These mining operations—controlled by an array of actors, including Venezuelan security forces, nonstate armed groups, and local gangs—are causing irreversible damage to the environment. Venezuela’s Amazon rainforest is being logged to make way for mines, mining camps, and roads. Most of the operations rely on archaic mining techniques and take place in rivers, polluting downstream ecosystems and communities with mercury. The mines also produce sediments and tailings that have damaged turbines at the Guri dam, the source of over half the country’s electricity. 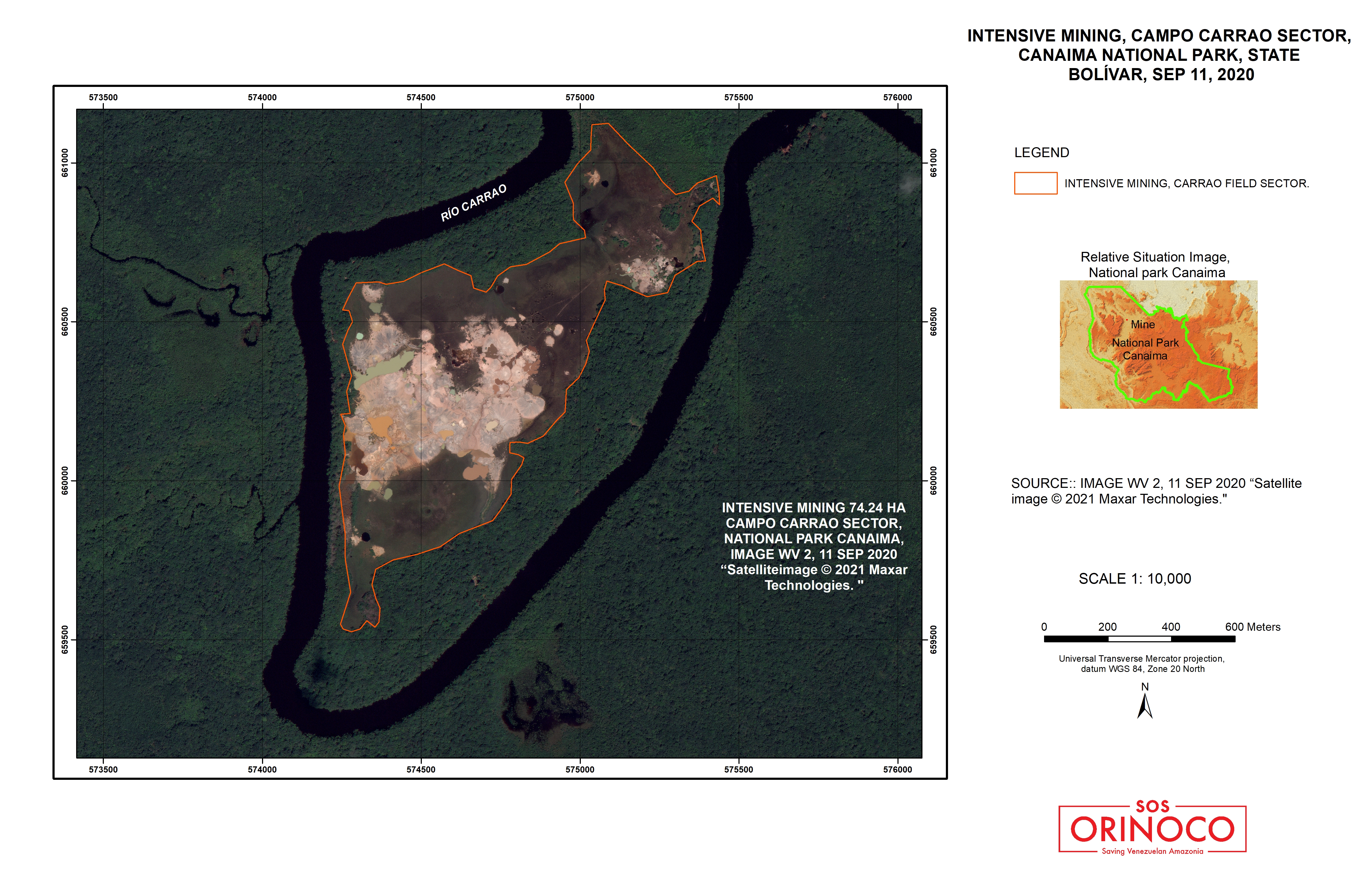 Mining operations have not ceased despite the fact that the opposition-controlled National Assembly passed the Organic Mega Reserve Law in 2018, which legally repealed Maduro’s Orinoco Mining Arc decree. Instead, mines have proliferated, now extending beyond the Arc into protected areas and subjecting indigenous communities to increased violence and human rights abuses. According to SOSOrinoco, there are at least 59 illegal mining clusters inside Canaima National Park, a UNESCO World Heritage Site.

Regime loyalists are building private mansions and resorts in national parks and other protected areas, including Los Roques Archipelago National Park, where new construction is banned per local laws. This construction has intensified now that high-level officials are subject to targeted international sanctions and unable to travel. In the past four years, 10 tourism-related buildings were constructed on the island of Gran Roque, the only populated island in the archipelago.

Venezuela’s environmental crisis has regional and global implications. Venezuela is among the 10 most biodiverse countries in the world and home to 13 percent of the world’s bird species, meaning that the Maduro regime’s activities pose a threat to global biodiversity. This environmental crisis is also contributing significantly to climate change, especially since Venezuela contains 6 percent of the Amazon rainforest, one of the world’s most critical carbon sinks. By using crumbling infrastructure and flaring gas, PDVSA is accelerating emissions in a country that is already significantly affected by droughts that have been linked to climate change. Venezuela’s oil spills also pose a threat to the Caribbean, and mercury from gold mining flows downstream, where it poisons communities that consume freshwater fish and possibly reaches neighboring countries.

Venezuela’s environmental crisis is inherently tied to its political situation. The Maduro regime is increasingly protecting itself from mounting international pressure at the expense of Venezuela’s natural resources and pristine biodiversity. Without a negotiated solution or change in government, the regime will likely continue to irreversibly damage the environment, silence environmental activists, and threaten indigenous communities.

The Biden administration, which has repeatedly advocated for international coordination to mitigate climate change, protect rainforests, minimize biodiversity loss, and safeguard environmental justice communities, should incorporate Venezuela into its regional environmental strategy. So should other key institutions, including environmental groups, the UN Environment Program, and development banks such as the Inter-American Development Bank, which recently launched its Amazon Initiative.

Conversely, as the Biden administration, Lima Group, and European allies continue to define their political strategy toward Venezuela, they should make sure to incorporate the full scale of these environmental concerns into their analysis. If and when conditions are ripe for a renewed negotiation effort, the negotiating agenda should include environmental security. Otherwise, prospects for a lasting peace will be slim. The oil industry and mining crisis will directly impact a day-after government’s ability to stabilize the economy, recuperate vast swaths of the territory from armed groups, protect public health, and safeguard human rights. Even if a peaceful transition occurs, the environment will also be a central factor in the country’s long-term stability. As Venezuela’s heavy crude becomes less and less desirable on the global market, the country will need to diversify its economy and lessen its dependence on oil. Tourism—particularly ecotourism—may provide one key avenue for diversification, but only if Venezuela’s pristine natural habitats are still intact.

In this regard, a future transitional government in Venezuela should be encouraged and helped to take the following steps:


Cristina Vollmer Burelli is a senior associate (non-resident) with the Americas Program at the Center for Strategic and International Studies (CSIS) in Washington, D.C. Claudia Fernandez is a research associate with the CSIS Future of Venezuela Initiative.