The New Challenges in Aid to Afghanistan

No one can dismiss the need to help Americans and other foreigners safely leave Afghanistan and to protect the Afghans who served the U.S. and other allied countries during the war. There also is a need to aid many of the Afghans who have become refugees outside the country and who often require extensive support to adapt to a new culture and economy as well as funds to live on until they can get the jobs they need to survive on their own.

The Afghans who had to leave Afghanistan, however, are only a small portion of the Afghans who need some form of aid and U.S. help. It is time to look at those who still remain in Afghanistan and the country’s deeper problems and needs. The United States needs to start planning now to provide the aid they will need during what may well be a decade long period of transition – and one where the U.S. may be able to persuade the Taliban to modernize and avoid any support of terrorism and extremist movements.

This paper focuses on the challenges in providing such aid. It addresses the scale of Afghanistan’s post-collapse economic crisis, and it examines the critical problems in Afghan governance and economics that must now be addressed. It looks at the uncertainties in the ways in which the Taliban may evolve and govern, and it suggests a number of ways the U.S. could best serve its strategic and humanitarian goals in providing aid.

The key areas of analysis include: 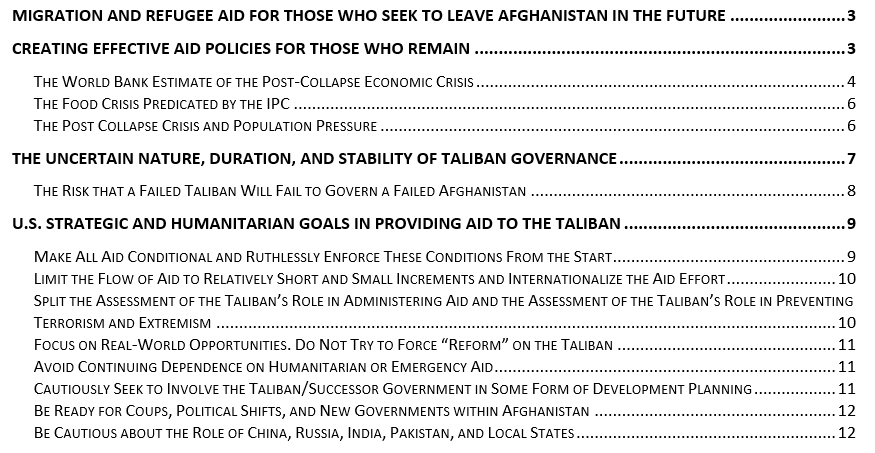 This report entitled, The New Challenges in Aid to Afghanistan, is available for download at https://csis-website-prod.s3.amazonaws.com/s3fs-public/publication/211028_Cordesman_Aid_Afghanistan.pdf?9N18awyxBRpJKvSr2v1e.NAHkOaUzF6.