In the early hours of Wednesday, a military spokesman in combat fatigues announced on Zimbabwean state television that President Robert Mugabe and his family were “safe and sound” in custody, and that a military intervention had been staged to target the “criminals” around the president. Military forces seized the airport, and armored vehicles patrolled the streets, blocking roads to the main government offices in central Harare. South Africa’s President Jacob Zuma, who spoke with Mugabe by telephone, confirmed his well-being, and has called for an emergency meeting of the Southern African Development Community (SADC) to discuss the security and political situation.

Q1: What precipitated the military intervention?

Zimbabwe’s political crisis has been decades in the making, as a corrupt and ruthless ruling party, together with leadership of the security forces, have looted the country’s wealth and harshly suppressed political opponents and critics. The current crisis arises in the run-up to the 2018 national elections, as the ruling ZANU-PF has been split over who should succeed Mugabe, in power since Zimbabwe gained its independence 37 years ago. Frontrunners for the position have been Vice President Emmerson Mnangagwa, a liberation war veteran with strong ties to the military, and Grace Mugabe, the president’s controversial and profligate wife. Last week, the president sacked Mnangagwa, accusing him of disloyalty in a move that was interpreted as clearing the way for Grace to step in as her husband’s successor. A number of liberation veterans have been recently expelled by Mugabe, but Mnangagwa’s firing provoked a stern warning by Army Chief General Constantine Chiwenga, who on Tuesday vowed that the military would step in to “protect the revolution” if necessary. The military followed through on its threat within a day.

Q2: What does it mean for the future of Zimbabwe? What happens next?

It is not at all clear how the military intervention and the power struggle within ZANU-PF will play out. The military has insisted that its intervention is not a military coup (it is), but rather is aimed at the “criminals” who have surrounded Mugabe and who “are causing social and economic suffering in the country.” This may be a sign that they will look for some semblance of a constitutional transition, a process managed by Mnangagwa and his cohorts in the run-up to national elections currently scheduled for July or August 2018. Such a process is unlikely to be free or fair. Mnangagwa and his fellow “securocrats” have long been complicit in Mugabe’s most egregious abuses, from the massacres in Matebeleland in the 1980s that left 20,000 dead to the most recent spate of assaults, abductions, and assassinations of government critics and activists. The securocrats further have deeply vested interests in retaining power, having amassed considerable wealth from farms, businesses, and diamond concessions. There is little guarantee that a post-Mugabe Zimbabwe will be any better governed, although Mnangagwa could be somewhat more sensitive to international opinion and may have a more genuine interest in economic revival. It is too early to presume that Grace and her acolytes will go quietly, and too soon to rule out the possibility of violent conflict.

Mugabe’s departure would not fix the country’s problems, but the current upheaval does provide some possibility of change. It also offers a potential opening for concerted diplomatic persuasion and pressure to help shape the eventual transition and push for a more open, transparent, and credible process. The new leadership—transitional or otherwise—will want to halt the country’s economic decline, which has accelerated since a brief period of recovery in 2011-2012. The government has been in negotiation with the World Bank, IMF, and African Development Bank to repay outstanding debt arrears, and the prospect of fresh lines of credit gives these institutions some leverage in pressing for transparency and reform. South Africa, along with the neighboring southern African states, will be loath to see a protracted or violent transition period and can bring their considerable economic and political influence to bear if they see the situation deteriorating. Mugabe’s credentials as a liberation hero have helped insulate him for criticism and rebuke from fellow African heads of state. But neither Mnangagwa nor any other potential successors enjoy the same standing and will likely face more direct and candid diplomatic intervention. China’s role could be critical. While the United States and (until recently) European powers have sought to isolate Mugabe and his most corrupt associates, China has been a critical source of loans and debt relief, investment and business partnerships, with deep ties on both sides of the current ZANU-PF divide. China’s main interest will be stability and a resolution of the immediate crisis; it will be less likely to press for democratic reforms in the run-up to eventual elections.

Q3: What are U.S. interests in Zimbabwe?

It is not yet clear what importance the Trump administration will attach to the current crisis and the potential political and diplomatic opening it provides. Zimbabwe has always ranked high on the U.S. democracy and human rights agenda in Africa—as a source of outrage at the regime’s brutal tactics and of exasperation at Mugabe’s seeming imperviousness to external pressures. Both President George W. Bush and President Barack Obama were directly engaged on the issue, and U.S. diplomatic efforts had the full weight of the White House and senior State Department leadership behind them. In contrast, U.S.-Africa engagement has not loomed large on the Trump administration’s policy portfolio, and U.S. support for democracy and human rights promotion broadly has been downgraded, eclipsed by security threats and commercial interests perceived by the Trump White House as more immediate and strategic.

There are other brutal, autocratic regimes in Africa, but Zimbabwe has been particularly galling to U.S. policymakers. At independence in 1980, the country enjoyed a strong, outward-looking economy, education, and health systems that ranked among the continent’s best, and a highly skilled and educated cadre of professionals and civil servants. The stunning economic collapse that began in the late 1990s—which saw the economy shrink by half and inflation rise into the sextillions—was seen as a self-induced catastrophe, driven by a haphazard redistribution of farmland to Mugabe’s political cronies, massive looting of state coffers, and egregious economic mismanagement. In the wake of the collapse, Zimbabwe went from a surplus grain producer to a country in chronic need of emergency food assistance, and all this played out in the midst of the HIV pandemic—Zimbabwe’s adult prevalence rate was estimated at 25 percent in 2003. Today, health funding and emergency food aid make up the lion’s share of U.S. assistance to the country--$261 million in 2016.

Sanctions imposed by the U.S. on individuals and businesses seen as complicit in the ruling party’s abuse have had limited effect. In fact, to U.S. consternation, Mugabe was fairly successful in blaming U.S. sanctions for the country’s economic meltdown and portraying U.S. criticism of his government as motivated by racist and imperialist impulse. In diplomatic terms, the U.S. government has been most active in pressing Zimbabwe’s neighbors, members of SADC, and in particular South Africa, to use what leverage they have to push Mugabe and his party to undertake meaningful reforms. But with SADC unwilling to take up that role, U.S. policy has largely been reduced to waiting for Mugabe to depart the scene. Ironic then, that after years of waiting for this moment, the new administration appears unlikely to seize the opportunity.

Jennifer G. Cooke is director of the Africa Program at the Center for Strategic and International Studies (CSIS) in Washington, D.C.

Most Recent From Jennifer G. Cooke

Feed the Future in Ghana
By Jennifer G. Cooke
June 6, 2018
In the News

Confronting the Problem of Fake News in Africa
November 30, 2017
Commentary 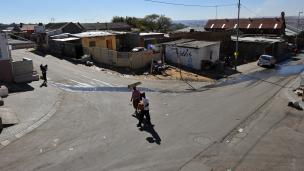 South Africa at a Crossroads
November 2, 2017
View all content by this expert