China: The Civil-Military Challenge: (Updated and Expanded) Volume One of a Graphic Net Assessment


This report is a greatly updated and expanded version of Volume One of a two-part e-book that helps to explain the shifts in China’s strategic position and the reasons why major changes are needed in U.S. strategy. It is entitled, China: The Civil-Military Challenge: Volume One of a Graphic Net Assessment. It is available for download on the CSIS website at https://csis-website-prod.s3.amazonaws.com/s3fs-public/publication/220104_Cordesman_Civil_Military_0.pdf?q6hgG_yJSC2YCH58ek3BbTlq_Z59NrFj.

This volume focuses on the civil-military dimensions of the changes in China’s capabilities and on the fact that China – unlike the U.S. and most other states – integrates its civil and military strategy and development plans. It shows how China’s civil development has greatly increased its capability to compete on a global level in both civil and military terms and to conduct what might be called “white area warfare”: China’s ability to achieve major strategic gains through purely civil means and without the use of force.

Volume One also serves as a critical introduction to the more conventional analysis of China’s military development in Volume Two. It draws on excerpts from official U.S. and strategic partner studies to provide a broad overview of China’s growing civil-military capabilities to compete with the United States and other powers. It provides a wide range of summary data on the trends in China’s development and future plans that show how China’s civil strategy, politics, economics, research activities, manufacturing base, and global role have evolved in ways that interact with its military development and actions on a global level.

It shows the extent to which the military trends in China’s growing capabilities, which are analyzed in Volume Two, reflect the impact of an integrated civil-military strategy as well as political and economic efforts that go far beyond U.S. and allied efforts. Unlike the U.S. and most of its strategic partners – whose concepts of strategy focus on combat in Clausewitzian terms – China focuses on Sun Tzu’s emphasis of winning without fighting where possible and on “battles” where civil maneuvers and the use of military forces with limited or no combat produce a lasting form of victory.

Volume Two – which is entitled China: The Growing Military Challenge – focuses on the trends in China’s military development. It draws on excerpts from official U.S. and strategic partner studies to provide a broad overview of China’s military strategy, defense policy, military organization and leadership, military spending, and impact on the military balance between U.S., Chinese, and Russian military forces. It can be downloaded from the CSIS website at https://www.csis.org/analysis/china-growing-military-challenge-volume-two-graphic-net-assessment.

Both volumes provide a wide range of graphs, maps, and tables that show how different various views are of the key data on a wide range of China’s evolving civil-military capabilities. This volume provides an updated graphic overview of the key developments in China’s growing civil capabilities to compete with the United States and other powers. Both volumes also warns how quickly China has progressed at the civil level since 1990 and that its civil capabilities should have at least as much attention as its military ones.

Important as recent military developments are, there is an acute danger in focusing on the military dimension – especially some given element of change like China’s progress in nuclear, missile, and other areas of military technology or on the near-term threat in the Taiwan Straits and South China Sea. Planning for the longer-term impact of China’s civil development and finding ways to shape some future structure of international competition at the diplomatic and economic levels that can limit competition, minimize confrontation, avoid war, and create new forms of cooperation is at least – and probably more – important.

Equally important, both Volume One and Volume Two show just how complex the trends in China’s evolving civil-military challenge are. They show how difficult it is to compare them with the trends in the U.S. and other states on a global level, how many different ways these trends can be estimated and compared, and how many conflicting views and uncertainties exist in virtually every key area.

Where possible, the graphics, maps, and trends in each Volume rely on official U.S. and Chinese reporting and on official reporting by international sources – including the UN, World Bank, and IMF. At the same time, they draw upon sources like the Congressional Research Service; official reporting by other countries like China, Japan, Taiwan, and South Korea; and on work by RAND, other think tanks, and expert sources to illustrate the range of different official and expert estimates. This version of the report also reflects suggested changes to its structure, new areas of coverage, and graphics drawn from several new sources that have been provided by the users of the first edition. There will be future updates and revisions; please send suggested additions and revision to Anthony H. Cordesman at acordesman@gmail.com.

It should also be noted that the text in both Volumes supporting the maps and graphics do not represent the authors’ views. It instead highlights official U.S. unclassified reporting as of late 2021. These excerpts are designed to give the reader an unclassified sumary of how the U.S. government assesses the related developments in China. Most excerpts come from the narratives in the declassified U.S. studies and intelligence data provided in the Annual Report to Congress: Military and Security Developments Involving the People’s Republic of China 2021 that was issued in early November 2021.

The key areas addressed in the Volume One include: 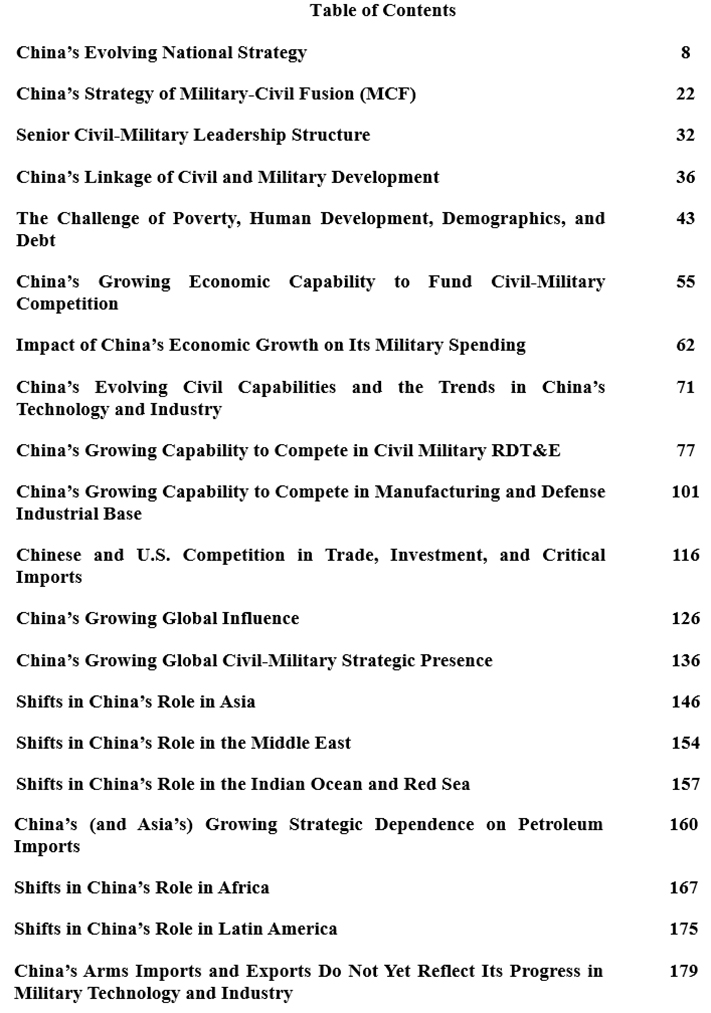