Call Houston and Wall Street for an Emergency Summit

Russia’s war on Ukraine has created one of the worst energy shocks since the 1970s. Sanctions on Russia have already taken oil out of the market. Talk of a U.S. ban on Russian crude and petroleum product imports, or even full sanctions on Russian energy exports, has sent the oil market into panic mode. Brent crude hit $139 per barrel on Monday before falling back. Energy security—an afterthought for the past decade—is a top priority again. The Biden administration is reaching out to countries like Saudi Arabia and even Venezuela to drum up more supplies. But what can it do to boost domestic oil and gas production?

First, it’s important to acknowledge that capital discipline has been holding shale companies back, not the White House. After a decade of debt-fueled production growth but poor financial performance, companies have kept spending in check. When oil prices rose last year, they resisted the temptation to raise capital expenditures. Instead, companies used higher revenues to pay down debt and return cash to shareholders via dividends and share buybacks. As a result, shale companies turned in stellar financial performance. Understandably, they want to stick with that game plan, and management teams have strong incentives to do so.

This year was always going to be different. The low reinvestment rate that let companies retain so much cash last year was unsustainable. Years of underinvestment by the global oil industry had taken a toll, and low inventories and dwindling spare capacity had the market on edge. Even before Russia’s attack on Ukraine, the oil market was sending strong signals that more supply was needed. The shale patch was set for a rebound. Most analysts expected U.S. crude production would grow by somewhere between 760,000 barrels per day (b/d) and 1 million b/d this year. (For context, the United States imported 670,000 b/d from Russia last year, mainly products and unfinished oil that refiners use for blending purposes, and imports from Russia have dropped since November.)

The soaring oil price means that market forces will do most of the heavy lifting to boost oil and gas production. But the Biden administration can catalyze this process. It should send a clear message that more investment in domestic oil and gas is needed to enhance energy security. It is time for an emergency summit on energy. The president should invite oil and gas executives as well as investors to the White House to discuss how the industry can raise output quickly.

This would be politically challenging. The Biden administration wants to focus on climate policy, not oil. Inevitably this type of meeting would lead some to accuse the president of backsliding on climate goals. But there will never be a better time for the White House to recalibrate its messages on domestic energy investment—and Biden could use this opportunity to hold the industry accountable on climate and emissions reductions.

Biden could offer some concrete measures to boost near-term production. The president could pledge to continue issuing drilling permits on public lands. The White House could consider a temporary royalty holiday on public lands, which could help squeeze more production out of states like New Mexico or Wyoming. Existing laws already allow onshore and offshore operators to apply for royalty relief, but there may be ways to broaden the program and simplify a cumbersome application process. If it wanted to go a step further, the administration could provide more clarity on the outlook for leasing, after a recent federal district court ruling cast doubt on upcoming lease sales by blocking the use of “social cost of carbon” requirements. Public lands make up a small share of total U.S. production, and the impact of federal leasing policy is often exaggerated. But these moves would show that the federal government wants to do its bit. 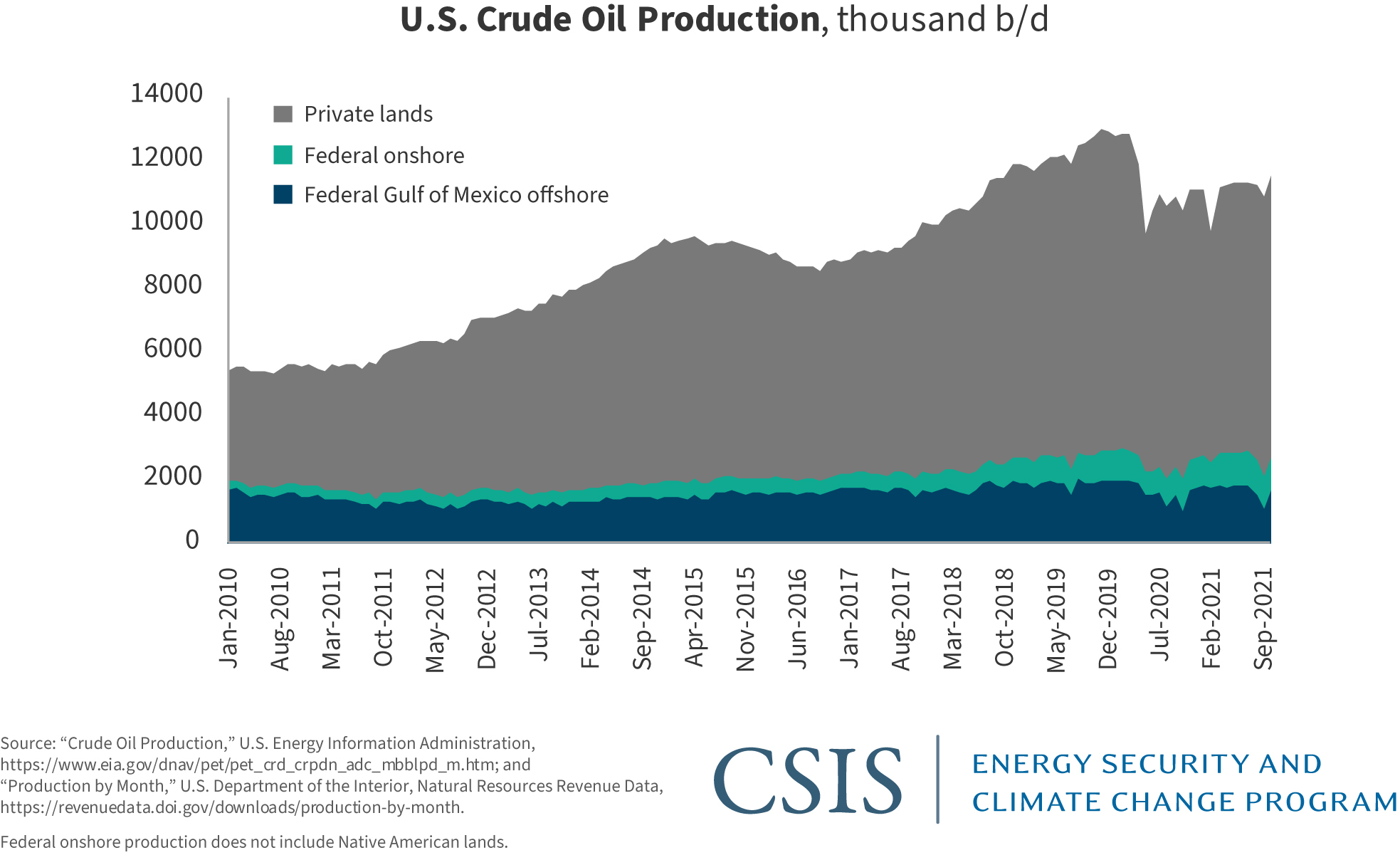 The White House could also offer policy support to boost U.S. liquefied natural gas (LNG) exports over the next five to ten years, as Europe seeks alternatives to Russian supplies. A number of proposed LNG projects have already won the necessary government approvals, and their challenge is to secure financial backing. This usually depends on locking up firm offtake deals. The federal government could help a few more projects reach the finish line by providing public finance, perhaps through direct loans or financial guarantees.

In return for this support, the Biden administration should extract commitments from oil and gas companies on methane emissions and low-carbon energy. Supporters of domestic oil and gas production often tout its low carbon intensity. Now is the time to prove it. Last November the Environmental Protection Agency proposed new rules on methane emissions, which would require companies to inspect well sites and equipment more frequently to find and fix leaks. These rules would impose limited costs on the industry and could deliver significant climate benefits—yet some industry associations have pushed back. This is an opportunity to secure strong support for stringent regulatory standards, as opposed to voluntary schemes, to cut methane emissions. With investors and buyers beginning to scrutinize the emissions intensity of gas, these changes will help secure the competitiveness of U.S. LNG exports. Biden should also encourage companies to firm up their commitments on carbon capture and storage, hydrogen, low-carbon fuels, and use of clean electricity at energy facilities to cut emissions.

Ultimately, the Biden administration just needs to play a supporting role as oil and gas companies take their cues from the market and from investors. Shale companies are in their best financial shape since the beginning of the unconventional oil and gas boom. With oil prices at this level, the industry has all the incentives it needs to raise production. Shale companies cannot simply flip a switch, and it will likely take six months or more to raise output, but a big ramp-up in production is all but inevitable. The White House can seize this opportunity to support higher production with lower carbon intensity.