In Defense of the Energiewende

For two decades, Germany has tried to steer its energy system from fossil fuels to renewable energy. This strategy, called Energiewende, is widely derided in the United States. It’s seen as expensive, ineffective, and unpopular. The stakes of that poor reputation are enormous: as countries respond to Covid-19, they look for examples to emulate, and it matters whether they see Germany as a success or a failure. Germany will also spend a lot of money to accelerate its energy transition, and if others think that Germany merely engages in pointless boondoggles, they might miss important signals about where the energy system is going. Getting the Energiewende right matters not just for history, but for policymakers today.

What the Critics Say

Coverage of the Energiewende is almost uniformly negative in the United States. Consider these representative headlines, covering almost a decade, from the New York Times and the Wall Street Journal, indicative of what outlets on different sides of the political spectrum say about it:


The overall tone is failure—driven by two observations: First, the claim that the Energiewende has not lowered emissions, because Germany phased out nuclear power, a major source of zero-carbon electricity. And second, that it has been too costly, because Germany offered a subsidy to incentivize renewable energy. There are other grievances, but they are narrower and more technical: that Germany pursued its strategy without consulting its neighbors, thus disrupting the regional market for electricity; that the reliance on renewable energy was bound to stall because the transmission lines to make it possible were not being built; that renewable energy would make the electricity system less reliable; and others. In one way or another, the critics have seen the Energiewende as costing too much to achieve very little. Are they right?

In 2002, Germany set a target to lower its greenhouse gas (GHG) emissions in 2020 by 40 percent compared to 1990. For years, it seemed like the country would miss this target, something critics saw as proof of failure. In the simplified version of the story, missing the target was due to the country’s decision to shut down its nuclear plants and its unwillingness to shutter coal plants. These two decisions supposedly offset the gains made by renewables.

But the reality is more complicated. By 2019, Germany had reduced emissions by 36 percent relative to 1990, which brings the country close to its target. (The reduction in energy use due to Covid-19 makes it more likely that Germany will reach the target.) Few countries can point to a similar record, and fewer still have managed it without an economic contraction (as many in the former Communist world did). By any metric, Germany’s emission record is among the world’s best. 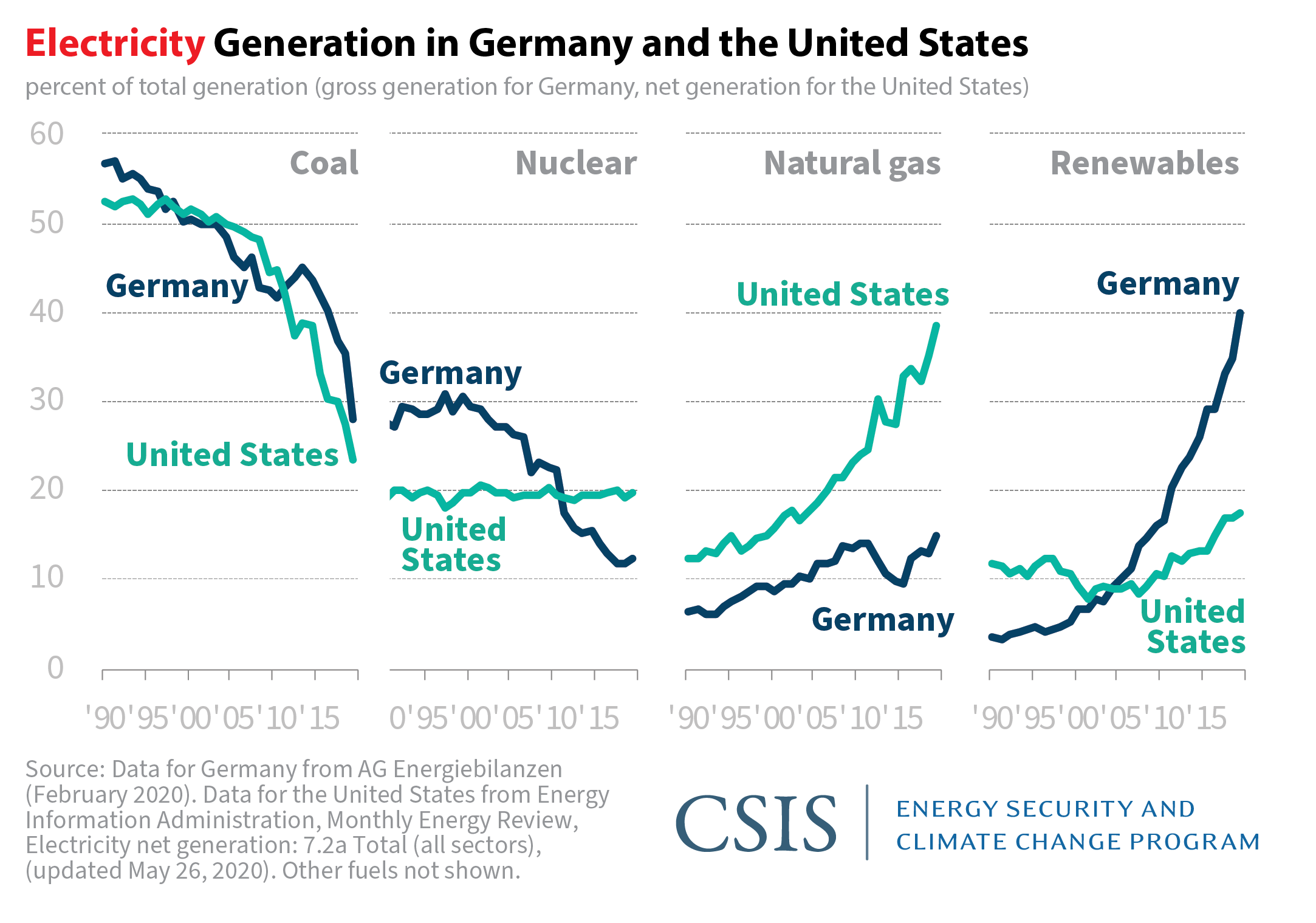 The German experience in reducing GHGs, therefore, shows big gains in electricity despite the gradual phasing out of nuclear power; major gains in industry, but not recently; and continuous improvements in buildings, but no gains in transportation. Even accounting for the much lower starting point in Germany, the trajectory is quite favorable when it is compared to the United States.

Was the Transition Too Costly?

The Energiewende depends on instruments that fall under many banners: industrial policy (research and development, loan programs), regional economic policy (targeted infrastructure to develop industrial clusters), worker support (early retirement programs, retraining, career development), and so on. But the most visible, and most controversial, manifestation of the Energiewende has been a surcharge on electricity bills to cover the difference between the feed-in tariffs paid to renewable energy suppliers and the market price for electricity. In 2019, that surcharge amounted to €27.5 billion ($30.8 billion).

Some electricity-intensive industries are exempt from this surcharge, which means the burden falls on households and less electricity-intensive businesses. These exemptions make it harder to provide an honest assessment of the impacts of the Energiewende on Germany’s competitiveness since vulnerable companies are partly sheltered from those additional costs. Even so, a few observations can be made about the economics of the Energiewende.

First, the costs for households have been substantial but should be put in context. In 2019, the surcharge for renewables accounted for over one-fifth of the power price paid by households. Germans now pay almost three times more per kilowatt hour of electricity than Americans. But residential electricity use per capita in the United States is almost three times higher than in Germany, a fact that long predates the Energiewende, so even though prices are higher in Germany, real costs are similar. Moreover, the overall energy burden for households in Germany has not changed over the past decade, given changes in other prices (like oil) and overall consumption patterns. Energy costs as a share of private consumption expenditures are similar to their level before the surcharge grew—and have fallen relative to the high point in 2013. This is not to minimize the significance of these costs—in fact, costs are the main complaint that voters have, even though the Energiewende remains largely popular. But costs should be put in context.

Second, the feed-in tariffs were essential in scaling up domestic and global manufacturers in the wind and solar industries. German exports related to renewable energy were roughly €8 billion ($9 billion) in 2017, while the renewable energy industry employed 317,000 people (in 2018). Of course, Germany faces stiff competition in these markets, and feed-in tariffs were just as instrumental in helping China build its industry as they were for German industry. But the broader point is this: the renewable surcharge did not vanish into thin air—it supported companies, many of them German, and it helped to bring down the cost of these emerging technologies. The German consumer paid, but everyone benefited, including German workers.

Third, there is little evidence that the Energiewende hurt German competitiveness. This is a complex topic, of course, in part because the most electricity-intensive sectors have not been subject to the surcharge, so it is hard to know how these industries would have performed without exemptions. But the headline figures do not suggest crisis. Manufacturing production has performed better in Germany than in other large European countries like France, Italy, Spain, and the United Kingdom (as well as the United States). Unemployment remains lower than in other European countries. The economy faced a cyclical downturn even before Covid-19, but this was largely due to the trade war between the United States and China, not to the Energiewende.

Other evidence corroborates this narrative. Electricity prices for industry have doubled in the past 15 years (in nominal terms), although most of the increase came in the 2000s; by 2018, electricity prices for industry were the second highest in the European Union (behind Cyprus, which generates most of its electricity from oil). But energy costs for industry have not risen in recent years, and as a share of gross value added, energy costs are the same as they were in the early 2000s—at roughly 1.5 percent. These numbers are not surprising. There is, in fact, a growing literature that challenges the notion of “carbon leakage,” the idea that industry facing carbon prices will migrate to areas without such costs, or, at least, the literature finds that such effects are negligible (see here, here, here, here, here, here, here, here, and here). The obsession with a loss of competitiveness is largely uncorroborated by data—so it is not surprising that the Energiewende has not harmed German industry.

The Energiewende has created some losers, however, none more prominent than the workers employed in the coal industry. Coal has faced long-term structural decline, and Germany has pursued various policies at the federal and the state level to support workers and regions (see here and here). The multilayered approach has gone beyond a focus on the worker through early retirement, guarantees for benefits, retraining, career counseling, etc. It has focused on investments in infrastructure (to cater to a new economic model), rejuvenating old locations (to avoid the eyesore of degrading structures), coopting local interests to avoid resistance, investment in institutions like universities to act as magnets for a local economy, attracting new industries that make sense for the regional economy, and incentives to create the kind of linkages that enable economic clusters to emerge.

Negotiating all these elements, of course, can often be frustratingly slow (and expensive). Such is the consensus-seeking approach of the Germans. But there is something to be said about the durability of the results when various strands of society have been brought on board and buy into a given direction. It is certainly attractive when considering the alternative seen in the coal-producing regions of the United States, where workers have been left to fend for themselves.

This calibrated approach is also a reminder that democracies do not follow the decarbonization path generated by a model—combating climate change is a political task, and it is no use wishing politics away. In Germany, that process meant garnering support from the anti-nuclear Greens before moving on to coal. In other locations, it will mean something different. But even a broad political consensus on the need to act must be operationalized and reconciled with the highly imperfect and often frustrating world of political reality.

The bottom line is that managing the energy transition is hard enough without a chorus to broadcast every fault, shortcoming, or problem. And the Germans themselves are keenly aware of the challenges of the Energiewende, forever investigating the past and tweaking the myriad building blocks that we collectively label as the Energiewende. There is still a lot of work to, especially in industry, buildings and transportation—in Germany, the United States, and around the world. But the Energiewende is far from a failure; it is a partial success story, continuously tinkered with and improved upon, an experiment to accomplish something never done before. It deserves a far better reputation in the United States.