Trade is a difficult issue for Democrats. That has not always been so. For roughly its first 150 years, the Democratic Party supported low tariffs and free trade. Its voters were largely southern farmers who wanted to export their products and workers who wanted the lower prices and greater choice that trade brings. Republicans, in contrast, were sensitive to the concerns of northern manufacturers who wanted protection from imports. The Depression, World War II, and the following Cold War produced temporary unity on trade policy, which began to erode in the 1960s and 1970s as trade became a more important part of our economy and began to be blamed for manufacturing job losses.

More recently, the composition of the two parties has been evolving. Farmers in the south and Midwest moved to the Republican Party. Minority groups solidified their support for Democrats, and college graduates and young people moved there as well. Both sides, from the Reagan and Clinton administrations forward, adopted policies that emphasized to varying degrees, market principles, entrepreneurship, and regulatory reform as the keys to economic growth, based on the John F. Kennedy argument that a rising tide will lift all boats.

As it turned out, they produced a rising tide but one that defied gravity and lifted some boats much higher than others. The result is a serious and growing inequality problem that has left our blue-collar workers—not college-educated and largely white males—politically stranded between a Republican Party that never cared about them and a Democratic Party that has abandoned them. That has made them susceptible to demagogues adept at blaming others—immigrants, minorities, and elites—for their problems, and has made many of them Trump voters.

The Democrats’ challenge is to recapture those voters without alienating their base of minorities, millennials, and college-educated urban dwellers at the same time. Trade is at the center of that dilemma, as the party’s current base is consistently pro-trade, and the alienated workers are consistently not. Donald Trump has played to that alienation with an aggressive, tariff-based trade policy that blames foreign workers and governments, particularly China, for our problems, and he has a clear public opinion shift against China on his side.

So, what policy will square the circle within the Democratic Party, criticize Trump, and be tough on China without sounding “me too?” Here are some suggested principles. Next time there will be some details.

First, build on Biden’s inherent internationalism. Trump is an unabashed nationalist, which he cloaks in “America First” rhetoric. He misses the point that Obama made successfully—that America cannot be first by itself. It is first when it leads the team. We didn’t create the international system at Bretton Woods out of charity. We did it because it was good for us and for what we believed in. Joe Biden’s whole career has supported that. He should use that to distinguish himself from Trump but also explain why building coalitions and working with others will produce better results than going it alone, particularly with China. That is not a hard argument to make, but it will not make itself.

Second, he should remind voters of the damage Trump’s trade policy has caused. That is an easy argument in farm states, even though it may not resonate with the voters in those states. It will take more work in manufacturing states, but it is hard to show a huge resurgence in manufacturing employment even without Covid-19. “Are you better off today than you were four years ago” is always a powerful question during a campaign, and there is no shortage of stories where the answer is “no.”

Third, he must lay out a vision for the future that supports trade expansion as essential to growth but also as a path to greater equality. That means ensuring the benefits of trade are more evenly distributed, not by letting them trickle down but by making agreements that pay more than lip service to worker rights. That will help workers in other countries, which indirectly helps workers here by discouraging a race to the bottom. But giving a boost to workers in the United States will depend on policies other than trade. There he should look closely at the proposals of Senator Elizabeth Warren and others focused on reminding corporations of their responsibilities to workers and further empowering labor unions. That also requires a blunt message that will further distinguish him from Trump: trade did not cause all of the manufacturing workers’ problems, so trade cannot fix all of them.

And that is the fourth principle. Our companies and workers win with a positive policy, not a negative one. We should not demand preemptive concessions from other countries before we even start talking or punish them when we don’t get everything we want. Neither should we punish our workers and consumers with tariffs and other arbitrary actions. Instead, we should take steps to bring them back into the workforce and create opportunities for them to acquire the skills they need to thrive in a rapidly changing economy. (CSIS’s Commission on Affirming American Leadership will present proposals on that, so stay tuned.)

I recognize that principles are not necessarily policy, but they’re a beginning—and useful in a political campaign where the issues are often painted in broad strokes. A future column will provide more policy details.

U.S.-China Relations are Headed for the ‘Darkest Chapter Yet,’ Says Eurasia Group
CNBC | Yen Nee Lee
July 2, 2020
In the News 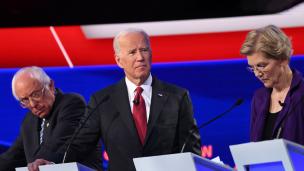 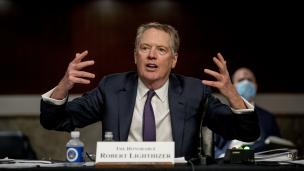