July 9, 2018 will go down in Turkish political history as the day on which President Recep Tayyip Erdogan completed the transformation of Turkey to a presidential system he personally designed and shepherded to realization, following a formal swearing-in ceremony in the Turkish Grand National Assembly (TGNA), whose powers have been reduced significantly. Having emerged with a new mandate after Turkey’s first simultaneous presidential and parliamentary elections on June 24, Erdogan thus transitioned from the de facto control he had been exercising in the previous parliamentary system of government, since his election to the presidency in August 2014, to de jure management of what he has been calling “New Turkey.”

Speaking at his inauguration ceremony, Erdogan ushered in the new era by saying: “We, as Turkey, as the Turkish nation, are hereby making a new start. With the presidential system of government, we are switching to a new model of government, which is much beyond the tryouts we have undertaken throughout our nearly 150-year-long pursuit of democracy and 95-year-long republican history… From now on, the president, whom the people directly grant authority to and have the right to hold to account, shall fulfill his duties in harmony with the legislative and judicial branches… Turkey, for the first time since the Ottoman Empire, made its choice at a critical crossroads with our nation’s own free will as opposed to coups or similar coercions.”

At the moment of his achievement of supreme political power, Erdogan chose to draw once again on his strong faith, which has been such an essential component of his ability to gain and retain the support of an electorally decisive segment of the Turkish electorate, and asked for divine blessing from a higher authority. Erdogan said, “May God enlighten our path and ease our work in service of our people and all mankind.” He then continued: “I have been in politics for over 40 years. I have always done politics to serve our people and to win the blessing of God.” Erdogan’s invocation was followed by that of the director of religious affairs who called on “God to bestow success on our president who takes up his new office today with the powers given to him by our people.” In a further symbolically important move, Erdogan brought all his new ministers to Friday prayers at the Haci Bayram Mosque on July 13, where, as a trained religious orator, he recited the Quran before his first formal meeting with them at his palace.

The Reorganization of Government

The expanded powers given to Erdogan by the new constitution—which had been approved in April 2017 but came into force only after the elections and the swearing in—and the comprehensive overhaul of the entire system of government were underlined by a series of wide-ranging presidential decrees drawn up at the palace and issued after the inauguration. The presidential decrees—12 as of July 18—replaced the similarly wide-ranging executive orders (KHK) which were previously issued by the cabinet in line with Erdogan’s wishes—37 until July 9—under emergency rule (OHAL) instituted after the coup attempt July 2016. It is interesting to note that OHAL is set to be officially ended even as its essential components are retained. With the post of prime minister and the 26-member cabinet under him in the previous system abolished, Erdogan appointed a vice president and 16 ministers who will report only to him. As the top bureaucratic post of undersecretary has been eliminated in all ministries, two or three deputy ministers will help with the task of implementing presidential directives. 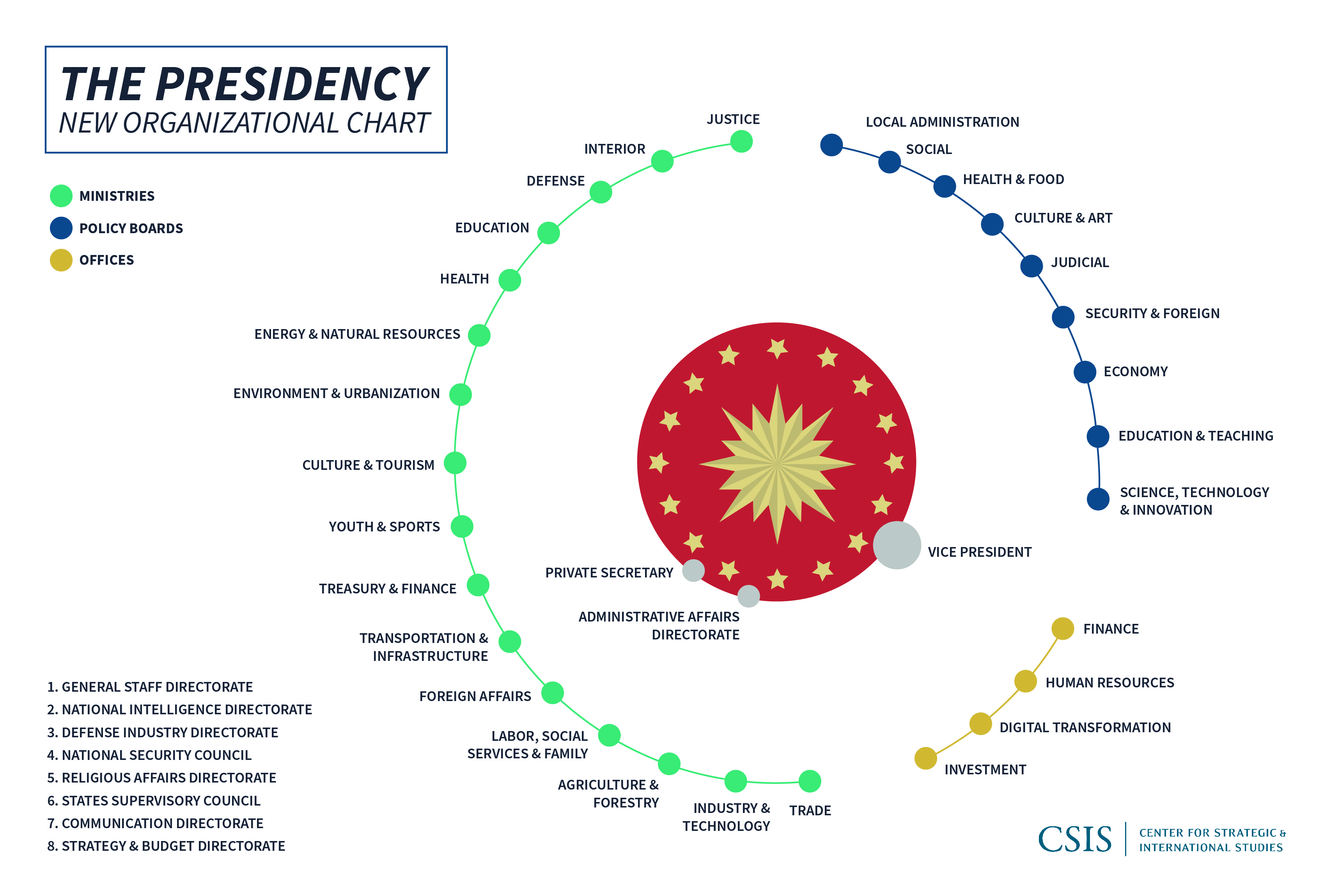 In addition, 65 existing boards, committees, and commissions have been merged into nine presidential policy boards on science, technology and innovation, education, economy, security and foreign policy, law, arts and culture, healthcare, and local administration and social policies. They will all have a vice chair and two other members and will report directly to Erdogan. As Presidential Spokesperson Ibrahim Kalin confirmed on July 13, they will “develop policy at the macro level.” Accordingly, it seems inevitable that they will constitute a challenge to the ministries in importance because of their proximity and access to the president.

The new Finance, Human Resources, Technology and Investment Offices within the presidency will also wield considerable influence in the coordination and implementation of Erdogan’s policies. At the same time, the restructuring of the key institutions of National Intelligence, Defense Industries Directorate, High Command of the Armed Forces, and National Security Council under full presidential control have strengthened Erdogan’s authority in security matters. Equally importantly, his influence over the judicial system, including the supreme court (AYM), the only body other than the TGNA with technical power of supervision over presidential decrees and their constitutionality, has been further expanded. With 12 of its 15 members now appointed by the president, the AYM will be even more sensitive to the prevailing political currents.

Sitting at the apex of a brand-new system of government heading into uncharted constitutional waters, Erdogan now has the power to shape and control all executive acts without effective parliamentary oversight, especially as his Justice and Development Party (AKP) has retained control of the TGNA through its electoral alliance with the Nationalist Action Party (MHP). In any case, the TGNA has lost much of its legislative and supervisory powers and lacks the checks and balances role of parliaments in other presidential systems like France or the United States. It cannot, for example, proceed to a vote of confidence, confirm presidential appointments, or direct questions to the president.

Despite speculation that there would be several vice presidents, Erdogan has appointed only one. His choice, Fuat Oktay, is an experienced bureaucrat who had previously served as undersecretary at the Prime Ministry. In revealing comments published after his appointment, Oktay was quoted as saying that he had been working since 2016 on a plan to strengthen and streamline the executive in line with Erdogan’s long-expressed views. Clearly, Erdogan wanted a vice president not so much as a surrogate but as a subservient supervisor of the extensive reorganization of the bureaucracy.

The appointment of Berat Albayrak as treasury and finance minister is not only a sign of Erdogan’s tendency to reward loyalty—an attribute the former energy minister has in natural abundance as his son-in-law—but also of his desire to centralize economic and financial decisionmaking. With the merging of the two most important economic portfolios under him and nine major financial institutions, including the central bank and three public banks also within his area of responsibility, Albayrak has been elevated to a position of immense authority under Erdogan as Turkey’s most influential “Economy Czar” since Kemal Dervis in the immediate aftermath of the 2001 financial crisis.

His decision to name his long-time confidant and assistant Mustafa Varank as industry and technology minister is another confirmation of Erdogan’s willingness to elevate from within his close circle. The appointment of Hulusi Akar as minister of defense is highly significant because of his key role as the head of the military establishment until his shift to a civilian position. With the accompanying transfer of formal authority over the military high command to his ministry, Akar will continue to keep an eye on his former colleagues without his uniform. Although it should not have come as a surprise in view of Akar’s virtually constant presence at Erdogan’s side in major events and foreign trips since July 2016, it is nevertheless an important move in Erdogan’s long-term plan to establish and retain full control over the military in a refashioned system.

The retention of Mevlut Cavusoglu, Suleyman Soylu, and Abdulhamit Gul—who all gave up their newly-elected seats in the TGNA in order to take up their portfolios—as foreign, interior and justice ministers respectively—is a reflection of Erdogan’s preference for obedient continuity in vital positions. This is also the case with former prime minister Binali Yildirim who has become TGNA speaker.

In virtually all his comments since July 9, Erdogan has emphasized the imperative of making government function more efficiently and rapidly in line with the requirements of “New Turkey.” At the same time, the reorganization of the system has further enhanced his power to decisively shape and control all policy decisions. However, the massive changes have also put the sole responsibility on his shoulders. With his dominant leadership qualities and boundless capacity for micromanagement, Erdogan is undoubtedly relishing the challenges ahead. As he has publicly acknowledged since his inauguration, the most urgent of these will be in navigating the increasingly troubled economic waters. His ability to tackle this task will almost certainly define the new phase of his continued leadership of Turkey.

Bulent Aliriza is a senior associate and director of the Turkey Project at the Center for Strategic and International Studies (CSIS) in Washington, D.C. Zeynep Yekeler is a research assistant with the CSIS Turkey Project.