The decline of the American telecommunications industry in recent years has come about not simply because of a downturn in American competitiveness but also because of a failure to appreciate and respond to the fundamental strengths of the Chinese state capitalist model that has empowered the rise of global industry competitors such as Huawei.1 As U.S. policymakers deepen their understanding of Chinese state capitalism, they must shift their perspective from one that focuses on specific firms (in this case, Huawei) to one that better understands the overall ecosystem of public and private actors in China and how they interact with the Chinese Communist Party (CCP).

Huawei’s recent divestment of its HONOR brand of smartphones to a group of private and state-backed investors illustrates this dynamic.2 In this case, the predicate cause was a 2019 decision by the U.S. Department of Commerce to add Huawei to the U.S. Entity List, thereby limiting its business with U.S. companies and threating not only its supply of U.S. semiconductors but also its access to the Google Play store, a necessary platform for HONOR’s phones to compete in international markets.3 To preserve brand value, a consortium of state-backed investors and private companies stepped in to rescue Huawei’s HONOR smartphone line, thereby hoping to sidestep the U.S. sanctions while also mitigating Huawei’s suffering with a rumored $15 billion payout.4 The resulting transaction left two separate companies: Huawei, with its remaining smartphone lines which will begin to transition to indigenous technology, and the newly independent HONOR brand, which is expected to maintain the same international supply lines as before.

Although the sale was announced by the purchasers as “market-based” and there was no explicit direction from Chinese authorities, the significant presence of state actors involved in the transaction suggests a degree of coordination by Beijing, a view that is also supported by Chinese-language commentary.5 The HONOR transaction is instructive therefore not only for demonstrating how Beijing might respond to future U.S. sanctions, but also for illustrating how China is adapting its unique model of state capitalism to leverage its vast commercial networks more efficiently. This new model shows that China is evolving away from an approach centered solely on large state-owned enterprises (SOEs) dominating the “commanding heights” of certain industry sectors, and toward a more hybrid approach involving the blurring of public and private actors working together toward defined strategic objectives under the overall leadership of the CCP.

This approach is one element of an overall economic model that is critical for placing Chinese commercial operations in their proper strategic and political context.

Under the Trump administration, regulatory pressure has been placed on individual Chinese firms, such as Huawei and TikTok, without sufficient consideration of the larger ecosystem in which they operate. This ecosystem, which CSIS’s Freeman Chair Jude Blanchette dubs “CCP Inc.,” is the latest evolution of China’s state capitalist strategy.6 Moving beyond a simple public/private distinction, CCP Inc. involves an array of key actors—SOEs and private companies, state-owned financiers, government regulators, and the CCP—that are connected through an increasingly complex web of direct and indirect transactional, financial, strategic, operational, and political relationships.

While entities within this ecosystem may enjoy a wide degree of commercial autonomy, Beijing maintains significant leverage (sometimes implicit, sometimes overt) to steer and support these firms through this complex and often opaque web of relationships. Critically, each firm tacitly understands that they will be supported where there is overlap with national strategic objectives and stymied from pursuing commercial transactions that cut against Beijing’s interests. Thus, while firms within the system can and do compete with one another, they are often incentivized to collaborate in the interest of serving China’s strategic goals.

The complex networks of CCP Inc. allow Beijing to have its cake and eat it too. Because China’s key economic actors are largely corporatized and structured as independent legal entities, they obscure the significant functional interdependence that exists with other actors of CCP Inc., such as state-backed financiers or the CCP. These formal and informal command levers allow Beijing to maintain direction over key enterprises where necessary, while the technical legal distinction of “independence” allows Beijing to deny influence should its actions invoke foreign scrutiny.7 This implicit linkage between “private” companies and the state is widely understood in China, even if it is not fully appreciated by foreign observers.8 As stated bluntly by one Chinese entrepreneur, “[f]oreigners . . . think companies are not related to the government. But in China, businesses are always related to the government.”9

In the case of the recent HONOR divestment, Beijing acted as an “investor of first resort” to respond to firm-specific U.S. sanctions and attempt to mitigate the blow to one of China’s most strategically important firms.10 Although Huawei is now calling for the new HONOR company to compete with it, in fact, the areas where HONOR will “compete” are closely related to those national priorities which are now less available to Huawei under U.S. sanctions (i.e., securing foreign chips and pursuing cooperative technology ventures with foreign industry leaders).11 The HONOR transaction therefore not only preserves an important national asset but also permits Beijing to diversify its approach for maintaining and enhancing CCP Inc.’s competitiveness in the global telecommunications industry. 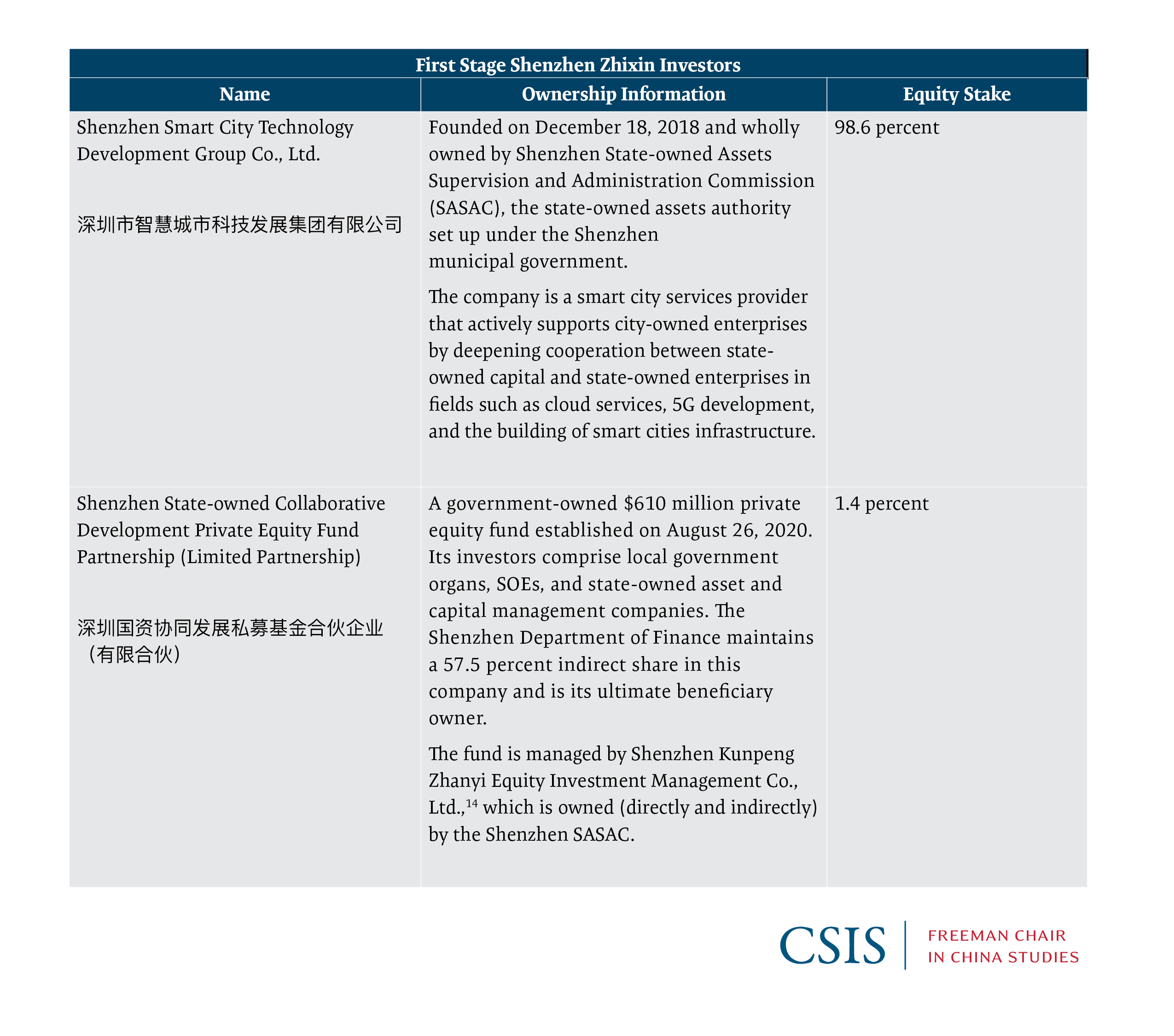 The second phase began on November 17, 2020 when Shenzhen Smart City Technology Development Group Co., Ltd., the 98.6 percent majority owner of Shenzhen Zhixin, sold its shares to three investors, two of which included private shareholders, alongside other state-backed investors. These investors and their owners are set forth in Table 2. 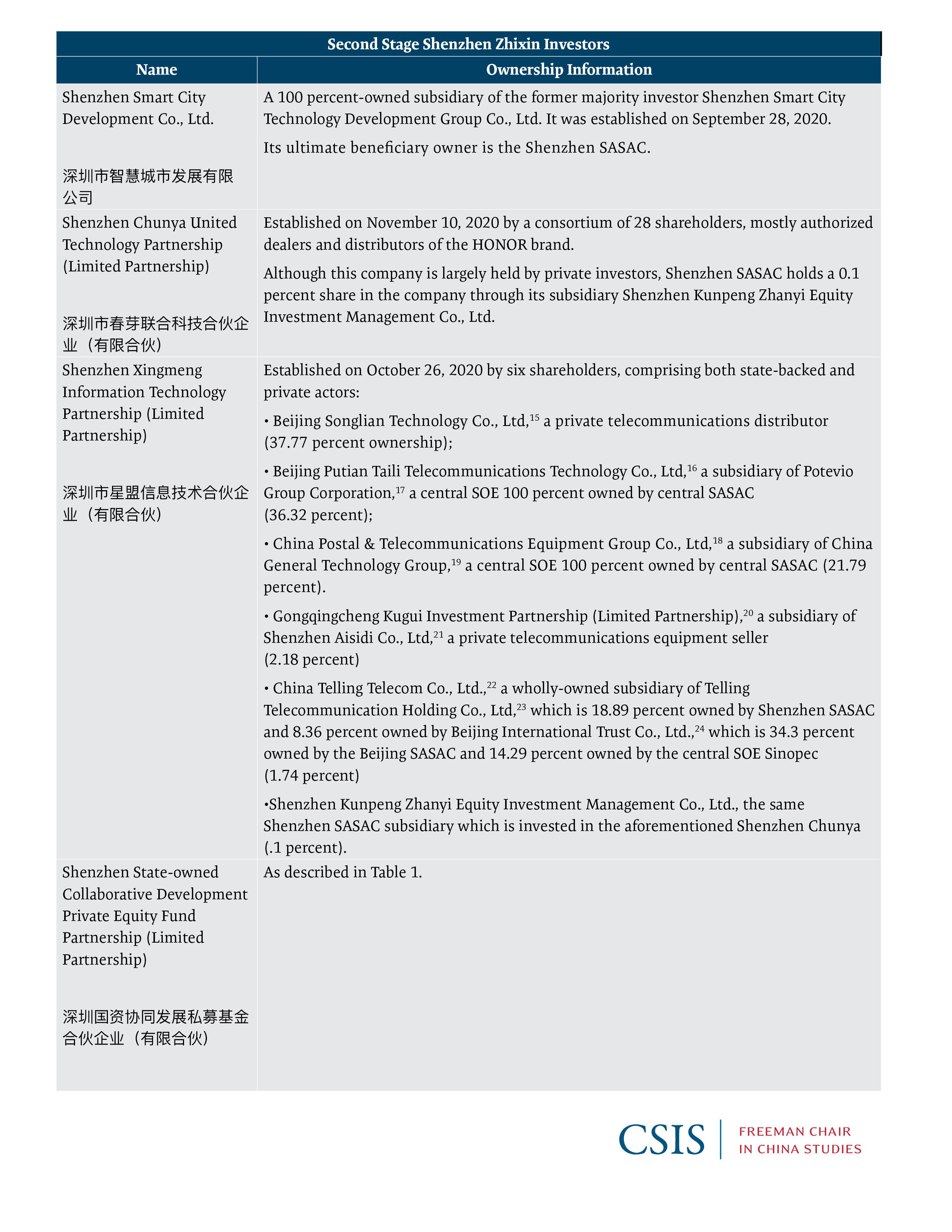 As of this writing, the respective equity holdings for each of the three incoming investors have yet to be made public. However, the registered capital for Shenzhen Zhixin increased from $15.2 million to $456 million following the entry of the three new investors.

While a managing partner has not yet been announced for Shenzhen Chunya United Technology Partnership (Limited Partnership), it seems possible, if not likely, that Shenzhen Kunpeng will be so assigned. This participation in both Shenzhen Xingmeng and, potentially, Shenzhen Chunya is significant, as it means that even where private actors are present in the HONOR transaction, they are still guided by a state-backed minority investor through its role as managing partner.

While further investigation into the investors of Shenzhen Zhixin suggests a high-level of government influence, statements by the companies involved have suggested it arose out of a spontaneous, market-based decision by Huawei distributors.

On November 17, 2020, the second phase Shenzhen Zhixin investors released a bilingual joint statement highlighting the purchase by “over 30 agents and dealers of the HONOR brand.”26 According to the statement, the purchase was a “market-driven investment [市场化投资] made to save HONOR’s industry chain.” Also on November 17, 2020, Huawei released its own statement stating that it would hold no shares or management rights in the new company and claiming that “over 30 agents and dealers of the HONOR brand first proposed this acquisition.”27 Neither statement clarified the extent of state capital in Shenzhen Zhixin or its initial formation by two state-backed companies.

Chinese commentary on the transaction, however, was more direct. Caijing Magazine, for example, clarified that two state-backed investors were behind the initial investment in Shenzhen Zhixin and quoted people close to Huawei as stating that “state owned assets played an important role in the acquisition of HONOR.”28 Wu Xiaobo, a popular financial journalist, also stated that:

Rumor has it that state capital is in the background leading the HONOR takeover. Because of the [entities list matter], it would definitely be a dead end for HONOR to remain with Huawei. The impact of the laid-off or reduced HONOR employees on Huawei would be a heavy burden. Therefore, if state capital in the background took the lead in the acquisition, it will actually reduce the burden on the company and provide Huawei with a certain amount of cash reserves. This is a win-win result for all parties.29

Were there any other motivations for this transaction? A speech given by Huawei founder Ren Zhengfei at a November 25 company event suggests two additional considerations.

First, the HONOR divestment was necessary to preserve the HONOR company’s access to foreign technology.30 Ren cast the divestment as a “divorce” and called on HONOR to compete with Huawei in the future, stating that HONOR can hold “foreign guns” and “foreign cannons” to compete with Huawei, which, according to Ren, is “armed with ‘made in Hanyang.’”31 This reference to “Made in Hanyang” refers to a nineteenth-century bolt-action rifle made by China based on a German model.32 In a commentary posted widely on the Chinese internet, self-media journalist and commentator Ning Nanshan stated that this analogy was used to suggest that HONOR should work to secure foreign technology (“foreign guns”) to compete with Huawei and its own developing indigenous (“Made in Hanyang”) technology.33

Second, Ren called on HONOR to “cooperate boldly and firmly with outstanding American technology companies.” The willingness of American and European companies to “cooperate” with Huawei in the early-2000s has been identified as one of the main sources of technology transfer that propelled Huawei to its present position and which contributed to the disintegration of major North American telecommunication companies such as Lucent and Nortel.34 Studies on China’s technology development goals have highlighted the emphasis on “international cooperation” in national industrial policies.35 For semiconductors, a 2014 industrial development plan calls for “encourag[ing] domestic integrated circuit enterprises to strengthen international cooperation, integrate international resources, and open up international markets,” alongside “vigorously work[ing] to attract foreign investment, technologies and [talent]” into China.36 While increased scrutiny of Huawei has dimmed the prospects for such cooperation in the future, the availability of a new “independent” firm in the form of Shenzhen Zhixin appears set to preserve this avenue of international cooperation.

Thus while Ren’s call for future competition between HONOR and Huawei seems like a whole-hearted embrace of capitalist economics, in fact his statement suggests a clear recognition that Huawei and HONOR are both team players on CCP Inc. working together to further the CCP’s designated technological objectives.

The HONOR transaction illustrates the various tools Beijing has at its disposal to mitigate and respond to U.S. efforts to sanction its unlawful trade practices. In this case, the mobilization of various state-backed and private enterprises to coordinate the purchase of a valuable but potentially at-risk national asset. By channeling state funds through state-backed investment companies, Beijing was able to act as an “investor of first resort” to transfer the HONOR assets to a non-Huawei entity which Chinese analysts believe may be outside the scope of U.S. sanctions.

Beijing’s response in this case was a defensive one. A pushback against the United States’ leveraging of its asymmetric power in the key nodes of semiconductors and, as it turns out, global app stores. However, in the future, the shoe might very well be on the other foot. The same unique characteristics of the Chinese economic model that led to the development of China’s strength in global telecommunications (i.e., the overall CCP Inc. ecosystem) are now being leveraged to promote further advances in high-tech sectors. These advances threaten a future where Beijing controls the key technological chokepoints within the global economy.

Scott Livingston is a fellow with the Freeman Chair in China Studies at the Center for Strategic and International Studies in Washington, D.C.