The Next Decade in U.S. Power Sector Decarbonization

The United States reduced carbon dioxide (CO2) emissions from the electricity sector by 40 percent between 2005 and 2020 as natural gas, wind, and solar replaced coal. President Biden wants to slash emissions further by 2030 and eliminate them by 2035. But to meet this goal, the country can no longer rely on the main lever it has deployed so far to reduce emissions—switching from coal to gas. Instead, the rate of decarbonization will depend on new solar or wind facilities being cheaper to construct that it is to operate an existing plant on fossil fuels.

There are different ways to make low-carbon energy technologies more competitive than running an existing fossil fuel plant. Imposing a price on carbon is one, although this is unlikely in the present political environment. Another path is to implement a standard for emissions (a clean electricity standard), but this idea too cannot pass Congress. Instead, the preferred path is a Clean Electricity Payment Program (CEPP), which rewards utilities for building renewable capacity and punishes them if they do not.

The incentive side of the CEPP—rewarding investments in low-carbon energy—is clear enough, although the support needs to be substantial to close the gap with fossil fuels today (see below). The penalty side of the ledger will be tricker. What matters is raising the cost of running a coal or gas facility. But imposing a penalty for not building capacity will be a crude and approximate way to raise the cost of electricity generation from coal or gas. As such, success will depend on how the program is designed and implemented, and whether it produces incentives to shut down coal and gas facilities in favor of new wind and solar. Finding that right level of penalties will require extraordinary regulatory and policy finesse.

The Next Decade Will Be Different

The 40 percent decline in electricity sector CO2 emissions between 2005 and 2020 was largely due to a 62 percent decline in coal-fired generation. Most of the decline in coal can be attributed to gas, whose output more than doubled in 15 years, and to the growth in wind and solar, which together made up 10.5 percent of total generation in 2020 (from 0.5 percent in 2005). In volume terms, the growth in gas was more than twice as big as the increase in wind and solar: 856 terawatt hours (TWh) for gas versus 410 TWh for wind and solar. Low gas prices have been an indispensable element of the U.S. success in reducing emissions. 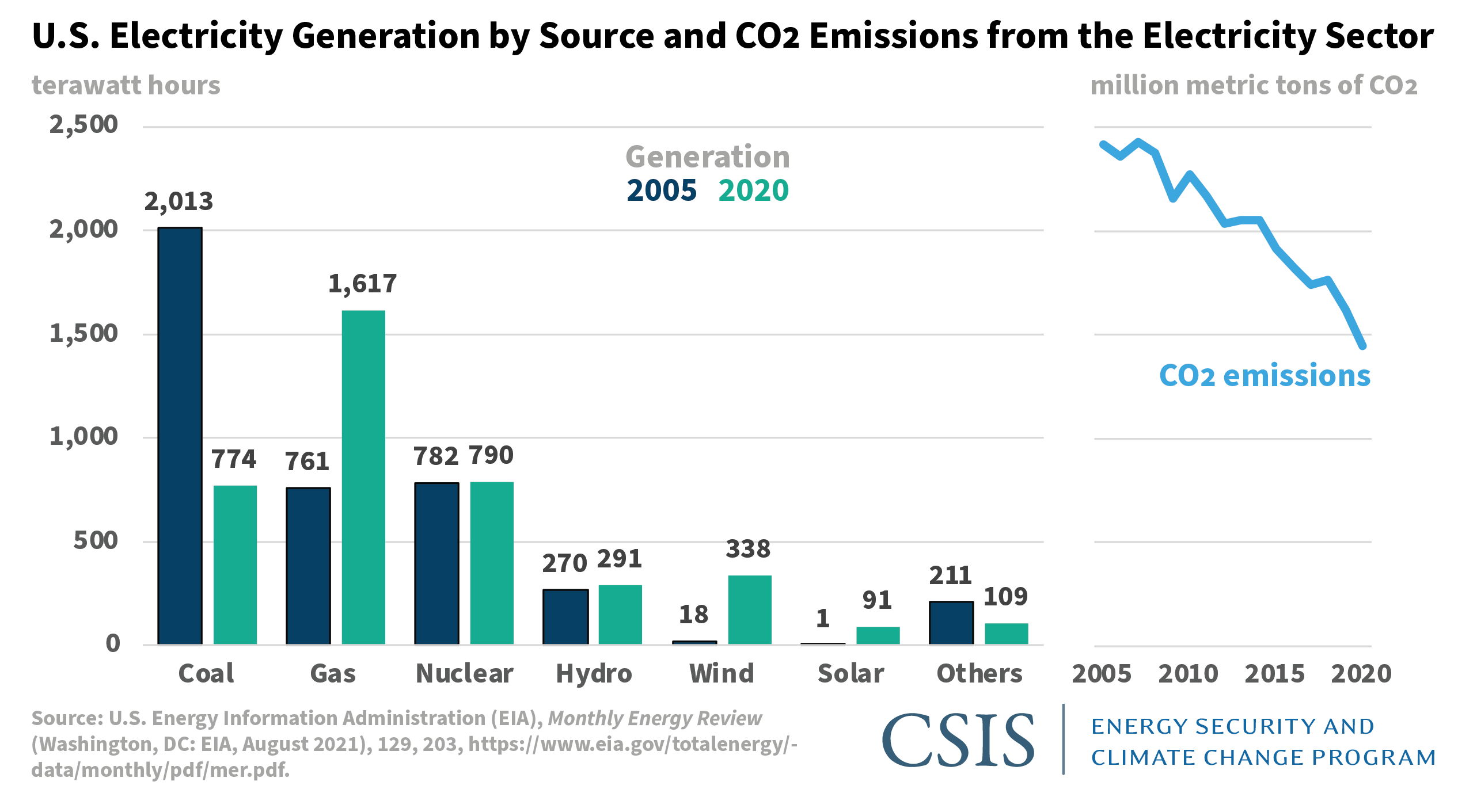 Therein lies a major problem for decarbonizing the U.S. electricity sector. The president’s target is an electricity system that is 80 percent carbon free by 2030 and entirely carbon free by 2035. In 2020, gas provided 40 percent of the country’s power, coal 19 percent. If carbon-emitting sources can only account for 20 percent of the total in 2030, generation from coal and gas must shrink from 59 to 20 percent in 10 years. Even assuming that overall demand for electricity increases—from electric vehicles, heat pumps, economic and demographic growth, or just a recovery from Covid-19—there is no escaping the fact that meeting the president’s goal would require that emissions from coal be eliminated and that emissions from gas to be (roughly) halved by 2030.

In theory, emissions could be reduced by capturing and storing the carbon from coal and gas plants. In practice, given the modest success in deploying such systems, most of the drop will come from a shift toward solar, wind, and other low-carbon sources. Since there is limited upside in nuclear and hydro, the reduction in emissions will fall on solar and wind. These sources provided 10 percent of the country’s electricity in 2020; they must grow to roughly 50 percent in 2030 (this assumes that 20 percent will be met by gas, 20 percent from nuclear, as in 2020, and 10 percent from hydro and other sources, again in line with 2020 levels).

In the 2020s and 2030s, the most important economic variable driving the electricity sector will be the competition between building a new wind or solar facility versus running an existing plant on coal or gas. In simple terms, if it is cheaper to produce electricity from an existing coal or gas plant, the rate of decarbonization will be slow, at least without some overarching policy mandate or other push (for example, pressure from shareholders on utilities). In order to phase out coal and gas, it must be cheaper for utilities to construct a new low-carbon facility than it is to operate one on fossil fuels (although some shut down of coal will also come from planned retirements).

In 2020, the marginal fuel cost was roughly $21 per megawatt hour (MWh) for coal and $20/MWh for gas. By contrast, according to Lazard, the cost to build a new facility was roughly $37/MWh for solar photovoltaic and $40/MWh for onshore wind (both utility scale, and both without any subsidies). And while the cost of both wind and solar has been declining, so has the cost to run a gas power plant. The main problem for lowering emissions in the 2020s is that it costs twice as much to build a new solar or wind facility as it does to run a gas or coal plant. In such an environment, it will be hard to dislodge gas and meet the president’s 2030 target. 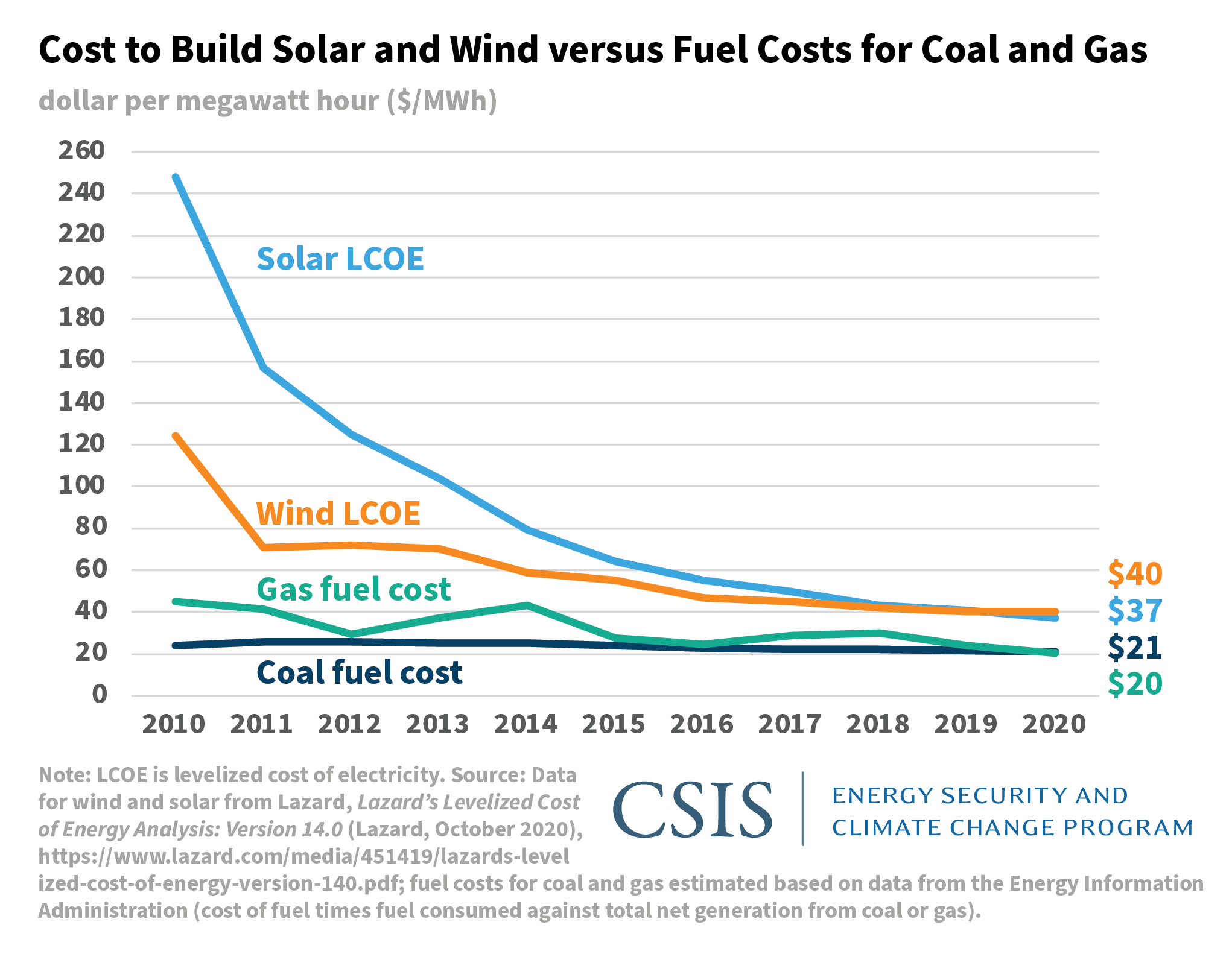 Without a federal tax on carbon, the United States must rely on tax credits to lower the cost of wind and solar or on mandates that drive deployment, such as renewable portfolio standards at the state level. Of course, the administration also has a target to cut the cost of solar by 60 percent over the next decade. If this goal were met, building a new solar plant would be on par with running a gas plant—but only at the end of the decade. Also, there is no such target for wind, where the cost declines have been slow in recent years, and where cost parity might be harder to reach.

This is the context for thinking about the proposed CEPP, which is designed to reward utilities for adding low-carbon capacity and punish them for not adding such capacity. The details are still being worked out, and there is a lot we do not know about the program yet. But the challenge for the U.S. power sector is no longer how to shut down coal, although there is still a lot of coal being used in parts of the United States. Rather, the challenge is to phase out gas, which is cheap right now (and expected to stay cheap by most analysts).

Closing the gap between existing fossil fuels and new low-carbon capacity through regulatory means will be difficult. For one, the proposed plan targets capacity additions, which means it will be a crude and imperfect proxy for what really matters: renewables needing to beat coal and gas. There is also a risk, if the program succeeds in shutting gas capacity, that system reliability is threatened, as has happened in California with the retirement of gas capacity. And, of course, a program that relies on incentives rather than carbon taxes spends money instead of raising it. (For context, a $20 per ton tax on CO2 would have raised $29 billion from the electricity sector in 2020.)

Yet what we can expect in the electricity sector is emblematic of the country’s decarbonization path more broadly. In the absence of a broad political consensus to curb greenhouse gas emissions, the political system will choose fragmented, imperfect, and likely more costly solutions that are likely to undershoot the target, requiring further interventions down the line. But this is the reality of climate politics in 2021. And so electricity, which is the only sector that delivered lower emissions since 2005, shows the difficulty of achieving the next batch of CO2 reductions in the 2020s.

Nikos Tsafos is interim director and senior fellow with the Energy Security and Climate Change Program at the Center for Strategic and International Studies in Washington, D.C.