Now that she is gone, the economic score on Park Geun-hye’s presidency can be tallied. From the start of 2013, just eight weeks before she took office, through 2016, ten weeks before she left, South Korea’s economy grew an average of 2.9 percent a year. It is the worst performance of any South Korean president.

She gave the country’s economic challenges casual attention, spoke little about them and, when she did, offered uncreative fixes. She signaled little understanding, or empathy, for the financial difficulties ordinary Koreans faced. Had Park spent more time and effort on the economy, she would have had more public support when the Choi Soon-sil scandal hit. It would have been a cushion in the crisis though likely not enough to save her.

The problem for Park’s successor is that it will be very difficult to do better than she did on the economy. There is opportunity in the short term. The country's trade data lately, including a 20% jump in February exports, demonstrates a turnaround from last year.

But just as the North Korean nuclear problem has become more difficult to resolve for the next South Korean president, so has it become more difficult to reshape the country’s economy for the long term. Park wasted critical years as a daunting demographic problem grew, models for taking the country in a new direction evaporated and political leaders remained stuck in an obsolete debate about fairness and growth.

A decade ago, before the global economic recession hit in late 2008, South Koreans were upset that the country’s economic growth fell below the 5 percent threshold during the Roh Moo-hyun presidency of early 2003 to early 2008. By then, however, a pattern had been established of declining growth rates that was a natural outcome of its growing wealth. As countries become wealthier, the law of large numbers works against the ability to sustain growth rates of the past. The 7.4 percent annual growth rate of the Chun Doo-whan presidency was followed by Kim Dae-jung’s 5.1 percent, a period that included the 1998-99 downturn known in South Korea as the IMF Crisis. Roh’s 4.5 percent rate was followed by Lee Myung-bak’s 3.2 percent average, another presidency that included a multinational downturn.

Park did not face the extreme economic challenges that Kim and Lee did. But she and South Korea had the slow-rising pressure of a major demographic change. The number of working South Koreans peaked in 2016 and will start to decline this year, a shift that can only be changed if the birthrate soars or the country opens to more immigrants. Neither option seems likely. Tucked amid the coverage of Park’s impeachment trial and a related scandal involving Samsung, the country’s largest company, South Korean media last month reported that the number of babies born in 2016 was the lowest since modern records started in 1983. Meanwhile, the number of deaths was at an all-time high. The National Statistical Office expects that South Korea in 2017 will have more people over age 65 than age 14 and under, a first.

Just as the nation needs more workers to support more people in their retirement years, it is getting less. And the effect goes beyond the numbers needed to underpin social security. A business columnist in Joong Ang Ilbo recently cited an observation by a Korean semiconductor executive that the country’s innovativeness is at risk without young people to fill, and work hard in, research labs. Chip industry conferences, the executive said, are attended by Japanese engineers in their 60s, Chinese engineers in their 20s and 30s and Koreans in between. “While Korea can keep the lead for awhile, it won’t be easy to try new things,” the executive told the columnist.

In the graying of its population, South Korea is once again following Japan, its economic role model for decades – and is, as it has in certain industrial segments like electronics and shipbuilding, beating it. That is unfortunate, in this case. South Korean women are having babies at a lower rate than Japanese women, and the country’s immigration policies are as restrictive as Japan’s. Half of South Koreans age 65-and-over had poverty-level income, the highest figure among all developed countries and twice Japan’s level, according to 2015 data. The OECD blames a “pension system that has not fully matured.”

Japan has been grappling with a declining working-age population for more than a decade and yet remains mired in ultralow growth and high national debt. The appeal of Japan for South Korean policymakers and business innovators to follow has diminished. Reluctant to tackle the social hurdles that would drive up birthrates and welcome immigrants, the Japanese have looked for other solutions, such as keeping older-age men working in factories and other workplaces longer via new technology such as robotic assistance. The message from Japan seems to be: stick with cultural tradition no matter the economic cost. Meanwhile, as many have pointed out, the U.S. and Europe, long examples of the benefits of freer movement of goods and people, are turning more insular and transactional.

Polls show the South Korean presidential race is now led by two candidates from the Democratic Party, which has been out of power since Roh’s term ended in 2008. For decades, the party framed its economic policies around the fairness side of a growth-versus-fairness debate that glossed over the complexity of turning a developing country into a developed one. That was unhelpful in dealing with the structural problems of the South Korean economy during the past decade. But there are glimmers from both candidates of a more centrist approach to economic matters. Both are talking about the growth stall-out and its effects while avoiding the overpromises for growth made by Lee in 2007 and Park in 2012.

Before the scandal erupted around Park last fall, the leading contender, Moon Jae-in, a Roh aide who lost to Park in the 2012 election, signaled he believed the party should put more attention on economic growth. On Monday, the first day of the official campaign, Moon pledged to create 1.3 million jobs, a 3 percent increase to the nation’s workforce. One of his chief advisers, Sogang University economist Cho Yoon-je, wrote critically about the protectionist sentiment that was sweeping the world and noted the importance of China’s growth by writing, “The economic map of the world is going back to the times before the 18th Century.” Cho has also been critical of the low productivity of South Korean workers and advocated an end to the “irrelevant work” that its hierarchical workplaces, including the government itself, demand.

Meanwhile, the second top-polling candidate, South Chungcheong Province Governor Ahn Hee-jung, has spoken about the need for rice farmers to diversify their crops, a badly-needed response to market pressures but one that was previously heresy in the Democratic Party. Ahn also advocates greater labor flexibility, though it is unclear whether he would pursue the same overhauls that Park did in her efforts to make it easier for Korean employers to hire and fire people. Labor unions resisted those measures, which died in the National Assembly.

Outside the country, much of the discussion on South Korea’s presidential race over the next two months will focus on the North Korea nuclear threat and the candidates’ visions for balancing the conflicting goals of Washington and Beijing. South Koreans are likely to give just as much, and perhaps more, attention to what the presidential candidates say they will do to boost the economy. 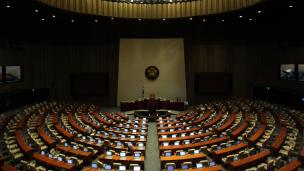 Labor Reform in South Korea: Creating a Place Where There are Many Paths to Success
By Evan Ramstad
November 24, 2015
View all content by this expert