Terrorism and Hate Crimes: Dealing with All of the Threats from Extremism

The focus on terrorism and Islamist extremism often leads Americans, our politics, and U.S. media to ignore the fact that what we call "terrorism" and Islamic extremism is only one part of the pattern of American extremism and violence. The FBI publishes an annual summary of the patterns in hate crimes, and one that has steadily improved its coverage of all forms of religious extremism.

For example, the latest report—covering 2015—was issued in November 2016 and is the first to include seven new religious anti-bias categories (anti-Buddhist, anti-Eastern Orthodox, anti-Hindu, anti-Jehovah’s Witness, anti-Mormon, anti-other Christian, and anti-Sikh), as well as an anti-Arab bias motivation.

The overall patterns in hate crimes are shown in Figure One, and excerpted and summarized below:

The FBI analysis also reported that: 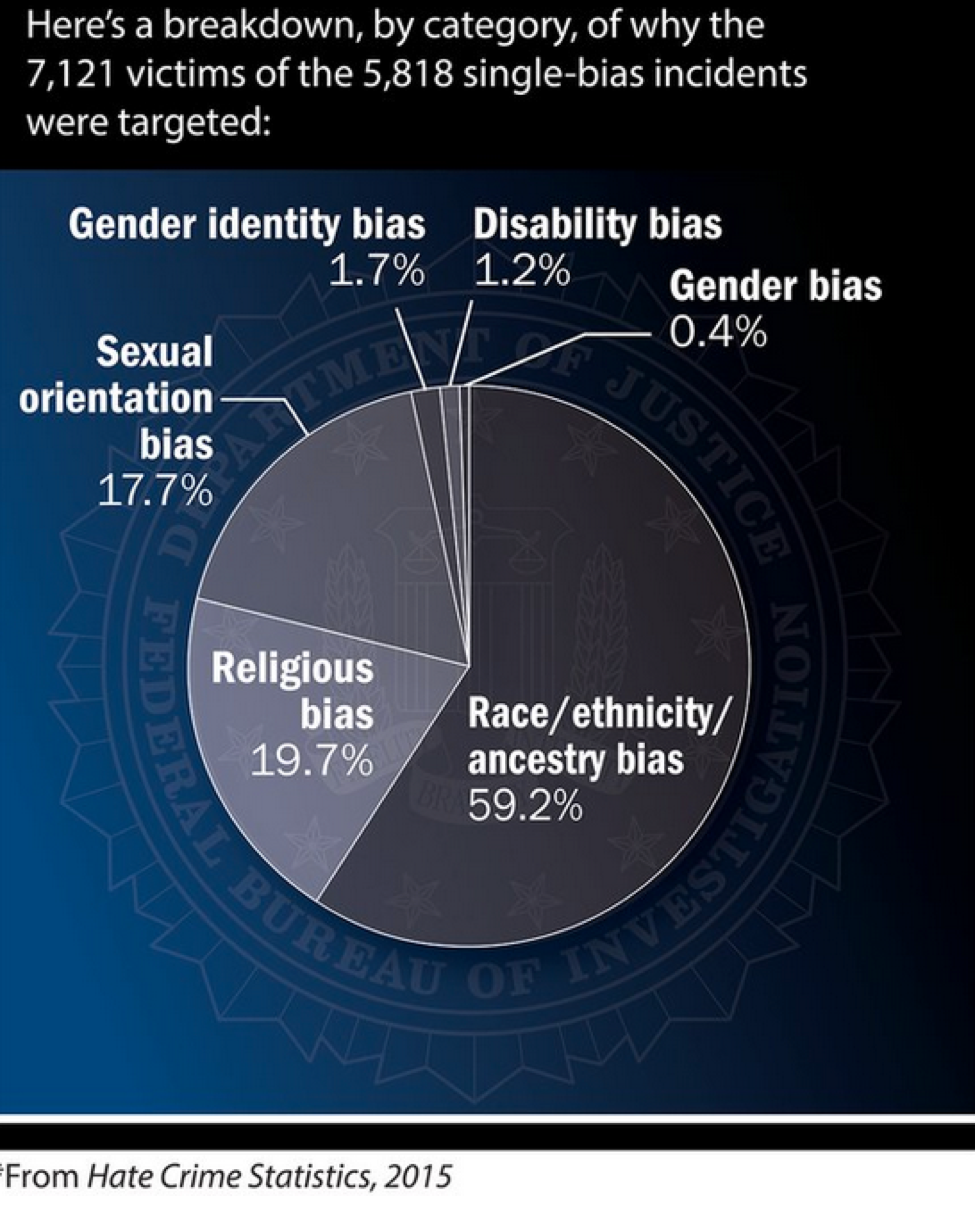 These data are a grim warning that overt, criminal acts of racism still present a major challenge in U.S. society. They make up more than 59 percent of all "single bias" hate crimes—over 3,440 incidents, and single bias crimes are the most clearly identifiable of the 5,850 criminal incidents and 6,885 related offenses that were motivated by bias against race, ethnicity, ancestry, religion, sexual orientation, disability, gender, or gender identity. These totals only involve reported incidents and reporting on hate crimes is far less comprehensive than terrorist attacks—all of which get massive media attention.

By comparison, the START database on terrorism—which the U.S. State Department uses to estimate the level of terrorism from all causes— found a total of 38 incidents of terrorism in the U.S. in 2015. START reported that 16 of these 38 attacks had some connection to religion, but did not specify the faith involved.

The worst terrorist attacks did have more serious human consequences than hate crimes. They killed a total of 44 persons in 2015, and injured 52 others—a total of 96 victims inside the United States. START also estimates that 16 of the 52 incidents had some form of religious motive.

In contrast, the FBI reports that 4,482 victims of hate crimes were victims of crimes against persons in 2015. Regarding these victims and the crimes committed against them:

If one compares the total victims from terrorism to the number of hate crimes, 96 victims— including 44 murders have to be compared to 7,121 victims of hate crimes, and 2,608 of these victims suffered from physical hate crimes against persons ranging from simple assault to murder. A total of 883 of this total suffered from aggravated assault in addition to the 18 murders and 13 rapes.

Figure Two: START Analysis of All 38 Terrorist Acts and Incidents in the U.S. in 2015 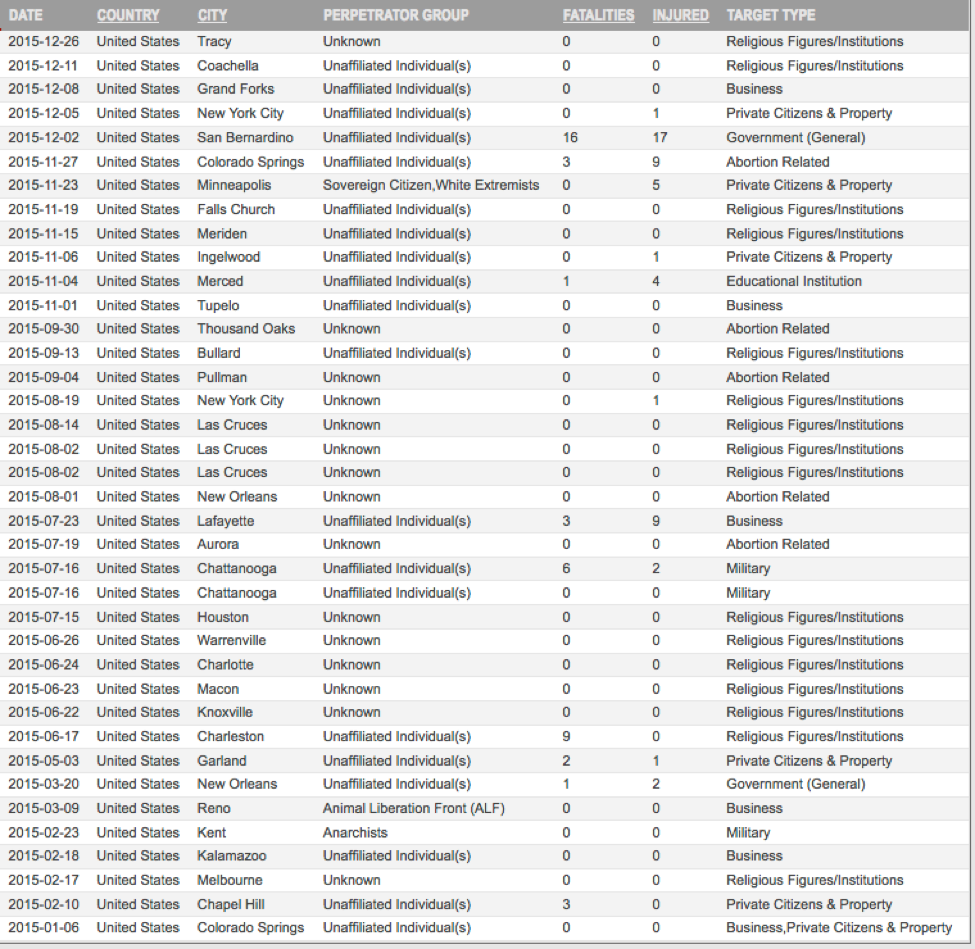 Terrorism and Religious Extremism versus Racism

It is equally important to note the relative size of racist hate crimes to terrorism, and how important racist incidents that are formally labeled as crimes remain in American society. The FBI annual report for 2015 states that, "law enforcement agencies reported that 4,029 single-bias hate crime offenses were motivated by race/ethnicity/ancestry in 2015."

The data on the patterns in victims showed there were 4,216 victims of race/ethnicity/ancestry motivated hate crime.

Traditional racism is still by far the leading cause of hate crimes and all forms of hate-related violence. It is interesting to note, however, that while terrorism produced more fatalities and many critical injuries, the 1.2% of racist crimes that were anti-Arab still amounted to 48 incidents—more than the total number of terrorist incidents from all causes. There were 46 Arab victims of physical attack.

Like racism, America's past heritage of religious prejudice and bigotry still dominates its total number of incidents. Hate crimes motivated by religious bias accounted for 1,354 offenses reported by law enforcement, and antisemitism made up over 51%. Less than 4% involved hate crimes against a Christian sect, a significant decline from the past pattern of hate crimes up until the early 1960s—although accurate trend data are lacking.

The FBI report shows that a breakdown of the bias motivation of religious-biased offenses showed:

The data on the patterns in victims showed there were 1,402 victims of anti-religious hate crimes:

These figures indicate there were 307 Moslem victims, compared to 96 victims from all forms of terrorism—only 48 % of which had any link to religion. Once again, however, it is important to point out that the levels of violence and numbers killed in religious hate crimes were far lower than was the case in serious terrorist attacks.

It is far harder to relate the other forms of hate crimes to specific aspects of the terrorist threat, but they do make it clear that other than to note that American extremism and extremist violence have many causes that do far more cumulative damage than terrorism. If one only examines the remaining hate crimes relating to a sexual orientation bias, the FBI reports that law enforcement agencies reported 1,219 hate crime offenses based on sexual-orientation bias in 2015. Of these offenses:

There were 1,263 victims targeted due to sexual-orientation bias:

There are several aspects of these figures that need to be kept in careful perspective:

© 2017 by the Center for Strategic and International Studies. All rights reserved.
Photo credit: Sean Rayford/Getty Images

Downloads
Download PDF file of "Terrorism and Hate Crimes: Dealing with All of the Threats from Extremism"
Written By

Learning the Right Lessons from the War in Iraq and Syria: Archives of the Key Metrics from 2004-2019
By Anthony H. Cordesman
October 19, 2021
In the News

China, Asia, and the Changing Strategic Importance of the Gulf and MENA Region
By Anthony H. Cordesman
October 15, 2021
Report

Press Briefing: Previewing the High-Level General Debate at UNGA 76
September 17, 2021
In the News

Blinken tells Senate that U.S. did everything it could ahead of Afghanistan withdrawal
CBS News | Skyler Henry
September 14, 2021
View all content by this expert